A Concert of Classical Proportions: Focus on Mozart

This weekend’s concert with the Harrisburg Symphony features Tanya Bannister as the soloist in one of the most popular – in many opinions, one of the finest – of Mozart’s piano concertos. The concert takes place at the Forum on Saturday at 8pm and on Sunday at 3pm with a pre-concert talk given by Truman Bullard an hour before each performance.

Also on the program are Ravel’s Tombeau de Couperin, Richard Strauss’ Serenade for Winds and Shostakovich’s Symphony No. 9, all works inspired by the aesthetic ideals of the 18th Century (okay, officially Ravel’s memorial tribute is to a Baroque composer but it’s still mostly a “neo-classical” work). You can read my “up-close-and-personal” post about the Shostakovich here. 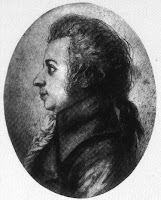 Mozart had recently turned 30 and was riding the crest of his popularity from a very good year the year before. Getting ready for the Lenten concert series of 1786 (the best times in Vienna for concerts were during Lent and Advent), he composed three new piano concertos between mid-December and the end of March. The Concerto on this program is the middle of these three works.

The major work during this period of six months – both in terms of size and concentration – was the opera, The Marriage of Figaro, which he finished April 29th for a premiere two days later on May 1st. He had already taken time off from that project to quickly compose (and perform) The Impresario (completed February 3rd, with four whole days to spare before its premiere). A month later, he completed the A Major Piano Concerto, K.488 and on the 24th of March, the C Minor Piano Concerto, K.491.

Other works during these same few months included the Masonic Funeral Music, K.477, the E-flat Violin Sonata K.481 (completed 4 days before the Piano Concerto No. 22 in E-flat, K.482), several works either for Masonic services or Masonic friends’ parties, at least four “insert numbers” written for other composers’ operas and a revival of Idomeneo, with two new arias written on March 10th.

Volkmar Braunbehrens, in his now out-of-print book “Mozart in Vienna,” estimates that the “purely mechanical task of writing it all down – quite apart from the creative work of composition – required that he fill an average of six pages [of 12-stave manuscript paper] per day.” Comparing this to a similarly productive period during his last year, 1791, when he wrote the Clarinet Concerto, Clemenza di Tito, The Magic Flute and what he completed of the Requiem, would have amounted to only 3 pages per day.

Creatively, it was also one of Mozart’s happier times. The joy of Figaro certainly permeates the A Major Concerto which sounds like it could have been contemporary with his writing the Finale of Act II, though I have no way of knowing what part of the opera he was working on when he was also writing the concerto. The dark but soulful slow movement – the key of F-sharp Minor is rare in Mozart’s catalogue – could easily be turned into an aria.

Whether the intense concentration of trying to find the musical solutions to the opera’s dramatic complexities resulted in creative over-drive or not would be hard to tell: he needed concertos for the Lenten Season and he had other obligations to fill (the Masonic Music for one, the additional “opera inserts” for another), so perhaps it was fortuitous that the music just flowed even more effortlessly out of him than usual.

In addition to composing, he appeared as a performer or conductor on seven occasions, had his own students (including a young man from England, Thomas Attwood, whose lesson books have survived), had another refugee from Salzburg, the oboist Josef Fiala and one of his better pupils, both trying to make a go of it in Vienna and both staying with Mozart’s family for weeks at a time, and he was busy with his Masonic lodge which was undergoing reorganization following the negative impact of the Emperor’s Masonic Legislation the previous year. A silhouette of Mozart, incidentally, graced one of the more popular calendars of the year 1786, just one indication of his popularity.

Ironically, after this outpouring of incredible music, his star faded quickly. Fighting against Salieri-inspired intrigues at Court, Figaro, based on a pre-Revolutionary French play that lampooned the aristocracy’s old-fashioned self-image and placed servants capable of out-witting them in the spot-light, played for only nine performances and wasn’t heard again in Vienna until 1789, by which time the French Revolution and the fate of the French nobility had erupted in the news.

At that first production, the Viennese nobility, for obvious reasons, didn’t care for it even though the Emperor thought highly enough of it to arrange a private performance at his summer palace and then for additional performances in Italy and in Prague, where it was sung at the wedding of his niece to the future King of Saxony.

Only in Prague was the work an immediate and lasting public success. As a result, Mozart agreed to write them an opera of their very own: the following year he would return with Don Giovanni.

Still, Mozart was able to give only one subscription concert that season instead of three – his best likely source of income – and the reaction against the more dramatic C Minor Concerto soured the public on his music which they regarded as too complex and ornate. Within months, he had become “yesterday’s news.” No wonder he would write his next great opera for another city and, meanwhile, start learning both French and English with the thought of leaving Vienna for new territories to conquer. It never happened, but that’s another story.

Another story that occurred while he was working on the bright and lively Piano Concerto in A Major involved a court nobleman and government official and an older woman he had promised to marry but whom he then murdered in an attempt to steal her fortune to pay off his debts. This was no worse a murder than might have occurred at other times, but it became the sensation of the day (akin to today’s scandalous “Trials of the Century”). What was more shocking was the vehemence with which the Emperor intervened, going against his own laws, including the repeals of torture and the death sentence (revoked ten years earlier). The murderer was sentenced to a public execution, the first stage of which involved red-hot pincers being applied to his torso, then being led to a second near-by location where his body was to be “broken on the wheel” (his bones broken one by one starting at the legs and working toward the neck). This was regarded as a terribly medieval reversion from the Enlightened views of the day: if the crime was one thing, the shock of this sentence was quite another.

In all, this execution took four hours and occurred only eight days after Mozart completed the A Major Concerto. The first stage of the execution took place just a few hundred yards from where Mozart lived. That day, he composed the two new arias required for the impending revival of Idomeneo. Two weeks later, he completed the C Minor Piano Concerto which is usually described as “dark,” “tragic” or “demonic” but whether it was a response to the news of the day or just his attempt to balance the light and beauty of the A Major Concerto, we’ll never know.

Suffice it to say, Vienna found the C Minor concerto not to their liking. And Mozart’s star quickly set.

So meanwhile, enjoy the A Major Concerto, written at the height of innocence and success without ever knowing what was, metaphorically if not literally, just around the corner.