A friend sent me this link for WNYC's Studio 360 that includes Kurt Anderson's recent interview with Elliott Carter who'd celebrated his 100th Birthday back in December. While I've heard and read a number of such interviews with the composer - "so, what's it like being 100?" and reminiscing about hearing The Rite of Spring when he was 15, &c &c - this one includes him talking about his work day, how he enjoys reading Shakespeare and listening to recordings of Mozart in the evening.


Here are a few comments I transcribed from the second half of the interview:

Kurt Anderson - In the last 50 or 60 years, since the war, do you have a sense of what was the single most surprising or adventurous turn you took in your music, that you did something risky...?

Elliott Carter - Well, I think everything is pretty risky... I wrote my 3rd String Quartet, it’s probably the most difficult to play - it carried out the ideas of many different layers of music going on simultaneously, different rhythms, different harmonies... it carried it to a great extreme. You like to go to the end of one idea and see where it lands. The Pacifica Quartet seems to get around, playing it a lot which surprises me a little bit.

KA - How does aging change your process as a composer?

EC - Well, I don’t think it’s changed... I compose just as I always have. As I said it’s always an adventure so I’m constantly trying to find new things I haven’t done... but I also am aware that I would like to have pieces finished... and so I’m a little impatient. Before I could have patience for a piece for a whole year but now it’s more like a week.

KA - And when you’re working, how many hours a day are you writing?

EC - Oh yeah, but I stick to my Mozart operas - I love those and I play them over and over... The thing that interests me about Mozart is the thing I have tried so often to do in my life is to make music that is constantly changeable. Mozart must have gotten that largely from writing operas, having the people change their character, and I like that. I’ve tried to write music that is very flexible and goes from one thing to another rather quickly... which is rather contrary to what most people do now, who stick to one thing for a long time... in fact they don’t even have to write it out, they just write ditto signs.
- - - - -

Carter has often described his music in terms of dramatic or theatrical encounters where individual instruments or layers of music have specific characteristics or personalities. It’s interesting to think of these pieces – something like the 3rd String Quartet – having some genesis in, say, the constantly changing “first finale” of Mozart’s Marriage of Figaro!

There were also some photographs taken during the interview which you can see: one of Carter talking w/Kurt Anderson during the interview; a candid portrait of Carter; the clutter at Carter's piano which clearly indicates a composer busy on a new piece; and a sketch Carter was working on, showing rhythmic placement where notes will later go. Unfortunately, they didn't say what it was he's working on at the time. 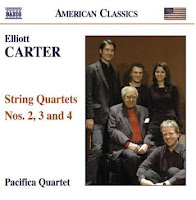 Incidentally, the Pacifica Quartet’s second volume of Carter’s complete string quartets – including the 3rd – was recently released on the Naxos label. Their first volume which included the first and the latest (“last” sounds so final) won a Grammy last month. Now with any luck Carter will feel like writing a 6th String Quartet for them to fulfill the commission they offered him for it in 2003. He said at the rate he gets around to writing quartets, he might be ready for another one after he turns 100. Well?

One can only hope!