Concertante's program last night began with a work by Mozart - or at least an arrangement of it. These are some of my notes intended for my pre-concert talk, along with those about Mendelssohn's youthful Quintet in A Major which you can read here.

In the days before there were copyright laws, the idea of arranging someone else’s music – what today would be called “copyright infringement” – was pretty normal. In one letter, Mozart apologized that he’d had no time to write because, in addition to the composing and performing he was involved in, he also had to arrange some highlights from his latest opera because if he didn’t do it, somebody else would – and beat him to the money that could be made with the amateur music market.

In the early 19th Century, long before there were TV sets or CD-players, people made their own music. It was part of a woman’s education, particularly, that she should be able to play the piano or sing pleasantly enough to entertain her husband and their guests after they’ve finished the dinner she’d cooked and put the kids to bed.

It wasn’t uncommon for cultured young men to be proficient on one or more instruments. Even a generation later, the household that Franz Schubert grew up in had a family string quartet – the father, a school-teacher, played the cello; the oldest son played 1st violin, another brother played 2nd violin and Franz, who also played the violin, usually played the viola.

As I’d been told in my student days, the Moravians – even after they set up their communities in Pennsylvania - might have a set of stringed instruments hanging on the wall of, say, the barber shop so that the men could take them down and make music together while waiting their turn – rather than reading magazines or watching TV, or playing with their iPods and iPhones.

And some of these amateurs must have obviously been of a very high quality. Most of Franz Schubert’s piano music, for instance (except for the last three piano sonatas) were written not for the concert hall but for the amateur, home-music-making audience – not just the reams of dances he turned out but also the impromptus and Moments Musicaux, the sonatas and, of course, one of the favorite forms of musical social interaction in those days, lots of piano duets.

Even late in the 19th Century, gentlemen would get together to play string quartets like these serious-looking men in 1889 (see left). Dvořák, for instance, played quartets with some of his neighbors. One summer, when I was living in Connecticut (more recently), I heard some wonderful sounding Brahms coming from the living room of a friend’s house: she explained it was her husband, a well-known doctor, getting together with some of the university’s medical students to play quartets!

In Mozart’s day, this “middle-class” market was just beginning to open up. Before then, it might have been the aristocratic court musicians – whether it was a small-time nobleman who might have a piano trio in his employment or a big-time nobleman like Prince Esterhazy who had a whole orchestra and an opera theater in his employ (with a fellow named Haydn to run it). Perhaps it was the change in the economy during (but especially after) a generation of Napoleonic Wars – probably that more than the French Revolution and the down-sizing of aristocrats across the continent – but by Schubert’s day, in the 1820s, there was an Esterhazy cousin, a Count, who hired Franz Schubert for a couple of summers to be their one-man music staff. Rather than conduct symphonies and write operas for his employer, he was expected to teach his two daughters to play the piano, to play for their evening’s after-dinner entertainment as well as compose works they could all perform, whether it was piano duets for the daughters, or part songs when they would gather ‘round the piano to sing songs written with 3 or 4 voice parts, especially pleasant when friends dropped by for visits. If a friend with a particularly pleasant voice was visiting for a week, Schubert was expected to produce a number of songs that would impress the guest and leave him feeling pleased enough to tell his friends how wonderful his experience was, visiting the Esterhazies. In fact, it was one of these visitors, a Baron Schönstein (with a fine baritone voice), who received the dedication of something Schubert composed that year, a set of 20 songs known as Die Schöne Müllerin.

So Schubert was a kind of status symbol – like having the best stereo speakers on an expensive sound system or the latest technology on your latest gadget. For Schubert, it was a kind of networking: hopefully the visitor would also spread his own name far and wide among his friends so they might go and buy his music to perform it for themselves. “Buying” was the operative word, here – the amateur market accounted for the largest part of Schubert’s meager income, and in fact many composers of his generation.

What does all this stuff about Schubert’s employment record have to do with Mozart?

Schubert was employed by the Esterhazies in the 1820s but Anton Steiner’s arrangement billed as Mozart “Grand Sestetto concertante” was published around 1808 - 17 years after Mozart’s death. A few years earlier, someone made a piano trio arrangement, as well. If no one was concerned about ripping him off when he was alive, who was going to bother with copyright infringement after he was dead?

And so while you’re listening to the members of Concertante playing this music tonight, imagine that 200 years ago, you might have been playing it yourself if technology hadn’t ruined the social interaction of friends making their own music!

Mozart composed his Symphonie Concertante for two soloists - violin and viola – with an orchestra. The idea of a symphonie concertante was a particularly French one – a combination Symphony-Concerto featuring two or more soloists. It was one of the most frequently composed “forms” in Paris in the 1770s and into the early 1800s. Even Johann Christian Bach wrote several symphonies concertantes for his London audiences, they were so popular. But really, it was nothing more than the old Baroque concerto grosso – exemplified by J.C. Bach’s father, Johann Sebastian Bach’s six “Brandenburg Concertos” – dressed up now in Classical Period clothes.

(Incidentally, the term symphonie concertante was used by the French to describe what they regarded as their creation. Across the rest of Europe – and in most modern-day writings, you’ll see it listed in the Italian as sinfonia concertante. It’s also that sense of “concerto-like” playing in an ensemble that gives the ensemble you’re going to hear play it its name.)

Presumably, Mozart wrote two of these symphonies concertantes while he was in Paris trying to find a job. There’s an interesting mystery behind the one he wrote for four winds which, even today, cannot be fully authenticated as Mozart’s but who else could have written it? It’s even available in two different versions but there is no copy of it in Mozart’s handwriting that’s survived.

Anyway, he wasn’t very successful with his job hunt – but then he wasn’t fully engaged in the search either since, free of his father’s ever-watchful eye for a change, Wolfgang, now in his early 20s (when his middle name might well have been changed to Randy), was more interested in finding a wife. Stopping in Mannheim on the way, Wolfgang fell in love with one of the opera singers there, Aloysia Weber. When his father got wind of this, he sent an urgent letter to his wife who had gone along as the official chaperone, to get their son off to Paris quickly before anything serious happened. 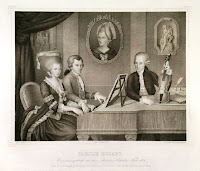 It was her one brief moment in the spotlight of her son’s biography – and she became ill and died while they were in Paris. Without a job, with no substantial income from the trip and with his mother’s body left behind in an unmarked grave, two months later Wolfgang returned to Salzburg to face his father’s wrath since it was clear – at least in Leopold’s mind – that his wife died through his son’s negligence. Wolfgang had been away from home for 18 months.

There is a question whether he wrote this Symphonie Concertante in Paris or on his return trip, having stopped in Mannheim where he had stopped to visit before, a court that had one of the finest orchestras in Europe where every player was capable of being a soloist, it was said. Certainly, he began composing a symphonie concertante for piano and violin there, but dropped it after 120 measures and left it incomplete. (By the way, his opera singer girl-friend had cooled considerably toward him by this return trip – ironically, Wolfgang would later marry her younger sister, Constanze.)

It’s also possible he may have written this work after he returned to Salzburg but that seems unlikely since by now he had been demoted – due to his long absence – from the court’s concertmaster to the chapel organist where his job was now to supply the brief “Church Sonatas” and short masses for the Archbishop’s service. He would have had little need for a concert vehicle for himself, especially where things in the French Fashion would have had little or no vogue.

His treatment of the two soloists – never really a solo “group” but a true “double concerto” with them each playing solos, answering each other’s lines – is however not typical of the French love of simplicity and more light-hearted entertainment. Certainly, the slow movement of this piece goes way beyond the emotional limits the French would have found acceptable. On the academic side, it can find its roots in the old-fashioned opera seria style of the day. In its heart-wrenching sadness, we might assume Mozart was thinking of his mother, but we’ll never know. To paraphrase Lucy Miller Murray’s notes, the irony in this piece is that we can listen to this work and know that while he couldn’t find a job, rejected by the successful composers of the day, his music survives today, regarded more highly than any work written by those who turned him down.

- - - -
The third photograph above, by the way, is a print made from a famous family portrait of the Mozarts, painted the year after the disastrous trip to Paris when the mother, Maria Anna Pertl Mozart, died. Wolfgang shares the bench with his sister Nannerl, playing a duet (notice the hands crossing) while their father Leopold, a violinist, stands behind the piano. On the wall between them is their mother's portrait painted a few years earlier: no longer with them, she could at least be included in spirit.
Posted by Dick Strawser at 8:21 AM