Mendelssohn at Concertante: A Bicentennial Salute

Usually, giving a pre-concert talk, I don’t get the chance to have the composer there to talk to about the music on that program. In the case of Concertante’s performance last night, aside from the fact Mendelssohn and Mozart had been long dead, it was unexpected that Shulamit Ran, the composer who’d been commissioned for the most recent work in their “1 + 5" Project, would be attending the concert, much less be able to drop in at the pre-concert talk (and my assistant, Otto deLoup, only found out about this the day before, anyway). I’ll post separately about the World Premiere of her Lyre of Orpheus, but I wanted to include my notes on the two works by Mendelssohn and Mozart – especially since I didn’t get to deliver them at the talk: when you have a living composer to talk to, the dead ones can speak more for themselves.

One of the hallmarks of Concertante’s programming is to present something familiar along with a less familiar work by a well-known composer and then something that might be a discovery for most of the audience. Mendelssohn and Mozart are certainly well known names and though Mozart’s “Grand Sestetto” that opens the program may be not-so-well known, the music is probably quite familiar – it’s an arrangement of his Symphonie Concertante for Violin & Viola. Mendelssohn may be one of the most popular composers around but his Quintet isn’t as well-known as it ought to be – and nothing can any more unfamiliar and a discovery to an audience than a piece that no one else has ever heard before – and tonight, Harrisburg gets its second World Premiere in two weeks. 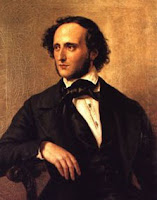 2009 is the Bicentennial of the birth of Felix Mendelssohn - born on February 3rd, 1809 - one of the more popular and best-loved composers from the 19th Century – best known for his Violin Concerto, the Italian and Scottish Symphonies, the music he composed for “A Midsummer Night’s Dream” (think Wedding March), the Octet for Strings and a little tune beloved of cartoons that’s always used to herald the arrival of Spring, one of his Songs without Words called “Spring Song.”

One of the works we’ll hear tonight, his String Quintet in A Major, Op. 18, isn’t as well known as any of these, especially considering a work he’d written in October the year before, the much more famous and more extroverted Octet in E-flat Major, or another work he composed in the summer of the same year he wrote the Quintet, an overture he sketched while sitting in the family garden reading Shakespeare. 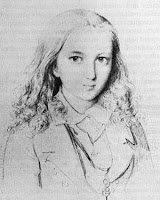 It’s amazing to consider that by the time Felix Mendelssohn wrote this string quintet, he had already composed a violin concerto, a piano concerto, a concerto for violin and piano, two concertos for two pianos, three piano sonatas, two violin sonatas, a viola sonata, a clarinet sonata, three piano quartets, six comic operas and a dozen string symphonies, not to mention the Octet for Strings – all between the ages of 11 and 17, the year he wrote this String Quintet and the Overture to “A Midsummer Night’s Dream.”

It’s also amazing to consider how works written at the same time in his life could go on to become generally regarded as masterpieces, while another pieces written at almost the same time never quite caught on with the public. Every time I hear this quintet, it ends up getting compared to the Octet, as in “if he'd never written the Octet, this would be a really good piece.” By itself, it is a very good one - especially for a 17-year-old - and one that deserves to be heard more often.

Felix Mendelssohn was growing up in the quiet city of Berlin in Northern Germany, the capital of Prussia, in what was a cultural backwater at the time, compared to Vienna, the Austrian Capital far to the south. In the year Mendelssohn composed his String Quintet, Beethoven was working on his last string quartet – he would die in March of the following year – and Schubert, little known beyond a handful of friends and lovers of songs, was writing his last string quartet as well (he would die about 20 months after Beethoven).

His grandfather was a famous philosopher, Moses Mendelssohn, and his father, Abraham, a successful banker, first in Hamburg, then, after they fled the Napoleonic Wars and the French Occupation’s “reign of terror,” in Berlin – Felix was 2 years old then and his sister Fanny was 6. Both children would later show extraordinary musical talent: while visiting Paris on business, Abraham found a piano teacher for Felix, now 7 years old, a woman who had been highly esteemed by both Haydn and Beethoven.

That was also the year that Abraham Mendelssohn had his children baptized, primarily because of the anti-Semitic regulations in Prussia but also because it was a kind of “Enlightenment” thing-to-do, reconciling Jewish and Christian beliefs with the ruling philosophy of the day. In honor of the children’s sponsor (Abraham himself waited another six years to convert), they added the name “Bartholdy” so sometimes you will find him with a hyphenated name, Felix Mendelssohn-Bartholdy. These days, it’s usually dropped.

The Mendelssohns turned their spacious home - with its garden and rather substantial music room – into a salon that saw guests like the writer ETA Hoffman, the philosopher Hegel, the poet Heine, one of the Brothers Grimm (collectors of the fairy tales, then something new and startling) as well as musicians like Carl Maria von Weber, Ludwig Spohr and the most powerful composer in Berlin at the time, Gasparo Spontini. They secured music teachers for both children and hired musicians to form an orchestra that played occasionally on their Sunday afternoon musicales. Fanny played the piano, Felix both the piano and the violin – and both children conducted, Felix (today he'd be called a tween-ager) having to stand on a chair to be seen by the players. His composition teacher, Friedrich Zelter, loved Bach – which fit in with Abraham’s preferences (he didn’t care much for the avant-garde music of Beethoven) – and Zelter introduced the boy to his friend, Goethe who was one of the greatest German poets of his or any other generation. When Goethe was a child, he had heard the still younger Mozart play and was very impressed – but in his old age, he was much more profoundly moved by the 12 year-old Mendelssohn’s talents.

The Octet, written when Mendelssohn was 16, was written for his violin teacher’s birthday. The teacher, Eduard Rietz, played the 1st violin part and Felix played one of the other violin parts. The next year, he wrote a string quintet – with two violas in the standard fashion of the day. This was also written for he and his teacher to play – and Mendelssohn also played the viola, by the way. For some reason, this work did not have a slow movement... but when Mendelssohn was in Paris six years later, he found out (on his 23rd Birthday) that his violin teacher had just died at the age of 31, and so he composed a memorial tribute to Rietz, adding the Andante movement to this Quintet. So in a rather odd way, we’ll hear music Mendelssohn composed when he was 17 with the inserted 2nd movement written when he was 23.

And then I’ll leave you to figure out, after you listen to it, why this work never quite caught on with the public like the Octet written before it or the Midsummer Nights’ Dream Overture written after it...

Watching the performance (rather than just listening to it), I had a rather unexpected epiphany about this piece - not its critical worth or its place in the canon, but rather something going back to that first performance when Mendlessohn and his teacher first played the piece for his family and their Sunday afternoon guests. You can read about it here (once I get it posted).

You can read about the Mozart here - and about the world premiere of Shulamit Ran's Lyre of Orpheus here (likewise).