This weekend’s program was called “Memories and Celebrations,” though I rarely don’t think much about marketing ploys and the music they’re meant to promote. For me this month, the Harrisburg Symphony’s ‘slogan’ was not in the music but in the experience. Not just the experience a listener in the audience would have, though. I sat in on all the rehearsals for this concert, arriving near the end of the Thursday afternoon one to hear them reading through the Serenade for Winds that Richard Strauss wrote when he was 17 and then staying through the end of the Dress Rehearsal Saturday afternoon.

The first symphony concert I ever attended was during the orchestra’s 33rd Season – considering their up-coming season will be their 80th, this was, yes, a long time ago. I was 13. This was on March 19th, 1963, 46 years ago almost to the week! Not only has my age gone up considerably since then, individual tickets that cost $44 today cost $3.40 for the same seat then. You could buy a whole subscription for those same seats – seven concerts (five by the orchestra with two concerts by guest orchestras, usually the Pittsburgh Symphony and the Cleveland Orchestra) – for $20.00.

True, gas cost $0.31 a gallon then but in 1962-dollars, that would probably be the equivalent of $4.48 in today’s income (assuming you have one). I don’t remember my folks complaining about “how expensive” gas was in those days: by comparison, it looked unacceptably high when it reached $4/gal this past year but given what the dollar would be worth today, it was actually more expensive then. 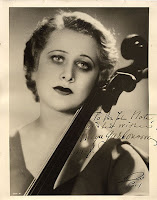 That first symphony concert I attended featured the cellist Raya Garbousova, a name probably unfamiliar to most listeners today but arguably one of the great cellists of that generation, just not as well known as Casals and Piatigorsky (Samuel Barber wrote his Cello Concerto for her – you can read more about her, here). She played the Dvorak Cello Concerto, not surprisingly, the one major cello concerto that gets heard (and requested) the most – well, it is the major cello concerto, after all.

Somewhere along the way, I had developed an interest in playing the cello, the main reason my parents took me to this particular concert. My father had met a woman who played viola in the orchestra (Dora Kanarr actually played in it since Day One at that very first reading session in 1930 even before it became an orchestra: she retired in 1984). She urged him to take me to a concert, since I was taking piano lessons and had begun to exhibit an interest in composing at the time. If I hadn’t been affected by music as a career possibility before, now I was hooked.

That following year, then, I started taking cello lessons when I was in junior high school. I remember asking my teacher if she could play the Dvorak Cello Concerto and she laughed, adding if she could, she wouldn’t be teaching strings in a junior high school. Bugging my folks for a cello the way most kids would badger them for a puppy, my dad found an old cello at a mid-town pawn shop which, as I recall, cost $80 (clearly, it was not a Strad). Though I never really exhibited any talent for the instrument and chose to focus more on composition and piano (in that order), I still have the cello though the last time I played it was probably 1972. Curiously, I find I am more comfortable today composing for the cello than any other instrument, including the piano.

Ironically, my first teaching gig was at UConn not far from where Garbousova was teaching at the Hartt School of Music in Hartford. She had started there only in 1970, four years before I moved to Connecticut but I never knew that at the time. Later, after I left UConn in 1978, a pianist friend of mine who lived and played in Hartford met her and had many wonderful stories to tell about her.

I also didn’t know that she had married a man named Kurt Biss and had a son Paul who married the violinist Miriam Fried.

This was another connection that slipped under my radar. Ms. Fried played the Beethoven Violin Concerto with the Harrisburg Symphony in January of 1984 – a concert I will never forget because we had a blizzard that day which kept both bassoonists in the orchestra from making it to the concert so I had to condense both bassoon parts – prominent solos for the 1st bassoon and important bass-lines for the 2nd – into a single part for the available Bass Clarinetist, Jim Dunn, who sight-read this concoction during the concert!

One of the newer talents receiving a lot of buzz in the classical music world the past couple of years is the pianist Jonathan Biss who is Miriam Fried’s son and therefore the grandson of Raya Garbousova.

It is, after all, a fairly small world in Classical Music, but the connections here – going back to the soloist at my very first orchestra concert – make me smile.

Last night, I smiled a lot to see so many young people in this audience, some clearly still in their single digits. (And, I should add, very well behaved, for those of you wondering about such things.) There were several in their teens as well, in a day when most people talk about 30-somethings as young people in the continually graying audience for classical music. I wonder if, 43 years from now, any of those kids will be sitting, possibly gray-haired, in a symphony audience somewhere?

In 1964, I started going in to hear some of the orchestra’s rehearsals, walking in as they rehearsed the final measures of the Franck Symphony’s first movement. My dad knew Al Morrison, a fellow pianist on the Harrisburg scene, who played percussion in the orchestra. He arranged for me to meet the conductor, Edwin McArthur, and I handed him a piece I’d written which they played at a Young Person’s Concert in November, 1964. I started studying harmony and composition with violinist Noah Klauss, the orchestra’s assistant conductor who also conducted the Youth Orchestra. Like soccer mom’s today, my dad drove me in for my weekly Saturday morning lessons and also to hear symphony rehearsals every month, regular parts of my education until I was off to college in 1967.

After moving back to Harrisburg in 1980, I became involved with the orchestra again, hanging out with some friends of mine who were now playing in it, including one of my best friends from high school, Vikki Moore, who not only “played third bass for the symphony” (as she described it) but was also the personnel manager. After writing program notes for them, I become the assistant conductor in 1983, having conducted a rehearsal of Mahler’s 1st as my “audition” the previous fall, and then eventually the personnel and orchestra manager when Vikki decided she didn’t want to deal with that any more and the job description was expanded. After a number of political straws, I left the orchestra and went on to spin CDs for the next 18 years. Aside from being a music person in a radio-person’s job, I found myself no longer regularly listening to music, just hearing it, and enjoying it a lot less, all of which had a hugely negative impact on my soul.

I’d attended concerts regularly since conductor Richard Westerfield moved them from week-nights to weekends in the mid-‘90s, but it wasn’t until a few months ago that I’d gone in to hear rehearsals again – those, for Mahler’s 9th.

But it was curious, walking in to hear the wind section playing the Strauss Serenade on Thursday, to realize 8 of the 13 wind-players on stage were people I’d worked with between 1980 and 1988, including a few I’d sat in on their auditions. In fact, 23 of the orchestra’s current players had been on at least one symphony pay-roll I’d filled out back in the ‘80s, though I’m counting principal violist Julius Wirth who I’d spent two seasons trying to recruit as a sub and finally got him scheduled to audition the week before I quit.

Looking around at some of the newer faces in the orchestra, some of them weren’t even born then...

Karen Botterbusch, the piccolo player who told me she had played the Shostakovich 9th with conductor Larry Newland his first season in 1978, was showing me pictures of her grandchildren, one of them now going to school (these were on the cell-phone: the brick-and-mortar photos were in her piccolo case backstage). Time and technology marches on.

Several other friends came by to chat and ask how I was doing, happy to see me again at rehearsals, “just like the old days.” In a sense, it did feel like coming home – having spent so much time growing up in that hall since that first concert in 1963 – but also because it was just a thrill to be involved in “live music making” again, even if I wasn’t making it myself. I never was a performer but did some conducting; more often, I’d consider myself a “performance facilitator,” I guess. I was asked about balance in the Mozart (a strange hall to check balance in, too) and several players asked me what this or that sounded like in the hall, grateful to know the Strauss blended beautifully, for instance, when on stage they had no idea.

And of course it was a thrill to hear all of this come together for the performance, sitting down as just another member of the audience. Ravel’s Tombeau de Couperin was ravishingly beautiful; pianist Tanya Bannister offered some of the most exquisite Mozart I’ve heard live in years, playing one of the most popular and beautiful of Mozart’s concertos; the Strauss was too short but a wonderful showcase for the wind section who blended like they’ve been playing full-time together for years; and the Shostakovich was just as exciting to hear as any major orchestra’s recording only here it was live and these were my friends on stage playing it.

There’s a lot more I could write about these rehearsals – the process itself is an interesting topic – as well as the concert, but it’s a cloudy Sunday morning in early Spring and other things (like copying my recently completed Violin Sonata) will spare your attention span for now.