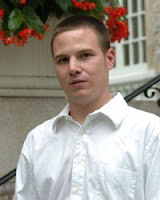 How cool is this? Devin Howell, the new assistant principal bassist (that means he plays 2nd Bass) of the Harrisburg Symphony is one of the winners of the YouTube Symphony's on-line auditions. In addition to playing principal bass in the Lancaster Symphony and assistant principal in the Allentown Symphony as well, he also teaches at Franklin & Marshall College in Lancaster, Dickinson College in Carlisle and Elizabethtown College. So basically, he's got the mid-state covered.

There were more than 3,000 video auditions submitted on-line through YouTube by amateur and professional musicians between the ages of 15 and 55. The ninety winners from over thirty countries were announced today. They will travel to New York City to play at Carnegie Hall on April 15th, conducted by Michael Tilson Thomas. The concert will be preceded by three days of rehearsals and master-classes.

Several musicians from major orchestras (for instance, the London Symphony, the San Francisco Symphony, the New York Philharmonic and the Berlin Philharmonic) chose the 200 finalists. The winners were then selected by viewers voting on YouTube's website.

Here is Devin's YouTube audition: he's playing the famous recitative passage from the opening of Beethoven's 9th Symphony finale and two excerpts from Mozart's Symphony No. 39 in E-flat.

One of the works on the program is by composer Tan Dun, his Internet Symphony No. 1 "Eroica" written especially for the occasion.

- - - - -
Thanks to John Clare for the initial tip on the winners. Originally the list was just countries, states and cities. John later found the players' identities and sent me the audition clip, posted here.
Posted by Dick Strawser at 8:26 PM