Losing Haydn's Creation in the Translation

The question came up after the performances of Haydn's “The Creation” this past weekend with the Harrisburg Symphony: what about the English text?

Most people seemed to agree that it was not very good – and yet, wasn't it Milton, taken from his poem “Paradise Lost”?

Well, yes and no.

I don't remember if I ever read much Milton (see below, right) when I was a student but I certainly don't recall the awkwardness of so many of the lines in this translation. As Ellen Hughes put it after Sunday's concert, she had read it “but my brain was younger, then.” 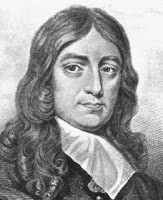 There didn't seem to be much of Milton's profundity and beauty of language in the words we heard sung so well that afternoon.

To me, the English in Haydn's work just sounded like a bad translation from the German to which Haydn originally composed his music. (We've all seen those hysterical translations of Japanese or Chinese signs into English, right?)

The “original” text had been presented to Handel who, as H.C. Robbins Landon points out, rejected it because it lacked the dramatic opportunities he looked for in a good oratorio libretto. For Handel, the idea was closer to opera: the only major oratorio he composed that did not pit characters dramatically against each other ironically became his most famous oratorio. “Messiah” has sufficient drama inherent in the story of Christ's crucifixion to satisfy his theatrical needs.

This text – the author or compiler remains unknown – was presented to Haydn who did not speak English. It would be unlikely he would have chosen to set it in English.

Baron van Swieten (see right), a former diplomat and official in the Imperial Court of Vienna who was familiar with English (whether he spoke it or how well he spoke it is another question), translated it into German and it is this text that Haydn set to music.

The problem, then, is taking music written to the rhythms and accents of German and fitting it with English. What Swieten did was make an English translation of his German to fit (presumably) the music and then publish both of them with an eye to future performances in England.

Unfortunately, many of the rhythms no longer fit the original English which then required “alternate words.” In a sense, then, we get an adaptation of Milton, not Milton himself. We get lines about a “flexible” tiger (when there was no adjective accompanying Milton's tiger at all, though he also mentioned a libbord). Instead of this fragment,

“...and upright with Front serene /
Govern the rest, self-knowing...”

“The large and archèd front sublime
of wisdom deep declares the seat.”

Through the decades' fog, I dug out my copy – or rather, my grandfather's copy – of Milton (something I believe he purchased between 1905 when he graduated from high school and the 1920s). (You can read the entire poem on-line, beginning here.) 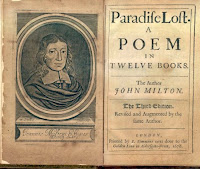 Milton's poem was first published in 1667. When I opened it after decades of separation, I was reminded that many people who define poetry as “something that rhymes” would not consider Milton's work a poem: it doesn't rhyme. In fact, in his 1669 edition, Milton himself writes,

“The measure is 'English Heroic Verse without Rime' as that of Homer in Greek and of Virgil in Latin; Rime being no necessary Adjunct or true Ornament of Poem or good Verse, in longer Works especially, but the Invention of a barbarous Age, to sett off wretched matter and lame Meeter.”

An epic poem, it eventually consisted of twelve books and, since it is “Paradise LOST,” it is more about later events that the Creation itself. The tale familiar to us from the opening of Genesis is recounted in Milton's Book VII, when Adam invites the Angel Raphael to recount the story to him. Most of it takes place between lines 232 and 640.

(To give you an idea of the extent of the poem, it consists of 10,554 lines divided – ultimately – into 12 books of which Book VII is the shortest. Curiously, the Story of the Creation, a seeming “flashback” within the structure of the poem, happens at what is also the 'Golden Section' of its structural outline. Just thought I'd point that out.)

It is unlikely any composer in his right mind (especially in his left brain) would ever choose to set Milton verbatim. I have never heard or read much about the opera that Krzysztof Penderecki wrote based on “Paradise Lost” in 1978 but I'm sure a lot of great material was left on the cutting room floor (however, it seems to be in 2 Acts divided into 42 scenes! You can hear about 2 minutes of it here, a scene [sung in German] where God warns Adam to avoid the Tree of Knowledge).

And then, when you're dealing with a translation in the first place, you're not getting Milton's words but a refraction of them (not to mention just a fraction of them). By translating that back into English from the practical aspects of fitting the music, we can't, unfortunately, go back to the Original Milton. Baron van Swieten's lack of familiarity with the language also gave us some pretty awful English.

This presents a problem for anyone choosing to perform Haydn's oratorio in English. Keep in mind, Haydn set it in German, so his music most naturally fits the German text. While some people are annoyed by having “super-titles” with the words-being-sung projected onto a screen over the performers, some wondered why use them when the singers are already singing in English.

Perhaps, because, even in the best of halls – and the Forum would not be counted among them – it is not always possible to hear every word, no matter how good the singers' diction.

Maybe the question could be, if you can project the translation in the vernacular, why not just sing it in Haydn's original German? Considering how distracting the quality of the English proved to be, perhaps that's a more viable discussion.

There are several versions of the English available. Swieten's comes with the standard editions, which very likely will have the German text with the English translation directly beneath it. There are further editions and publications which may include a translation that is “cleaned up,” up to a point, or one, like Robert Shaw's, which makes more sweeping corrections and clarifications.

Individual soloists might change a word here and there because (a) it makes more sense, (b) it fits the rhythm better or (c) it's easier to sing, certain vowels working better in certain registers of the voice.

Soprano Ilana Davidson sang "On mighty wings uplifted soars the eagle" but the projected text read "On might pens uplifted" which is both Swieten and the original Milton which, in this case, means feathers or pinions.

Tenor Benjamin Butterfield, who's sung several “Creations,” mentioned he has four different scores, each with different texts or additional corrections and suggestions.

But you can't always do that with a whole choir. So a lot of it depends on what edition is available to perform.

Something most audience members wouldn't think of, but you can't just say to 100 singers “Bring your own scores of 'The Creation' to the rehearsal,” because those editions could have different texts and rhythms which would just make a musical mess of things.

What comment do I most often hear from people who “miss” the old King James version? The modern editions often “lack the poetry of the original” [sic].

The same can be said for Baron van Swieten's re-translation back into English of Milton's lines from “Paradise Lost,” where “Lost” also implies what traditionally happens in translations.

I suppose we could try BabelFish... That means, those lines about Adam's forehead?

“...and upright with Front serene /
Govern the rest, self-knowing...”

which van Swieten retranslated as

The large and archèd front sublime
of wisdom deep declares the seat.

In Babelfish English, it becomes

Yeah, still kind of loses something, doesn't it...

- - - - -
Illustrations: Top: Haydn, in a 1794 portrait (painted 2 years before he began work on The Creation) by Johann Zitterer; Baron van Swieten as depicted by actor Jonathan Moore in the 1984 film, Amadeus
Posted by Dick Strawser at 2:20 PM