A Plea for Arts Education

While November is being dedicated to writing “The Lost Chord” for NaNoWriMo (National Novel Writing Month) – as well as preparing a class on Puccini's Turandot this Thursday, on Haydn and on the “Basic Language of Music” at HACC starting next week, in addition to preparing a program of "Music Around the World" with the Newstead Trio at the Harrisburg High School this week - I just wanted to take a moment to post these bits I found this morning through the Arts Journal. 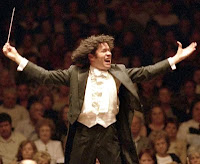 Much is being made of young Gustavo Dudamel (and his hair) as he becomes the Music Director & Conductor of the Los Angeles Philharmonic. I hope as much fuss is going to be made about his ideas of bringing music to the underprivileged kids of his community and by extension potentially to the rest of the country. Having grown up in the Venezuelan program known as El Sistema and having been conducting its youth orchestras for years, Dudamel understands the importance the Arts can have in the life of a child who might otherwise have no future beyond the poverty and crime of slums and street-life.

This article in the Toronto Globe & Mail, about the founder of El Sistema, José Antonio Abreu, makes a point for supporting Arts Education in the public schools.

Think about this paragraph:
- - - - - - -
"People refer to this talking only of material wealth, leaving aside the spiritual patrimony of humanity, within which art takes a very important place," he said, through an interpreter. "The distribution in the world of arts education is tremendously unjust. When arts education takes the place in our society that it deserves, we will have much less delinquency and violence, and much more motivation towards noble achievement.
- - - - - - -

Another article – this one in England's The Guardian – skims across the topic of “what makes great art?” Basically if you can understand it too easily, then it means either you're not really “getting it” or it's not great art.

Look at the milestones of artistic achievement over the past centuries: one of the reasons they survive is because they can be re-interpreted for each new age, culture and social sensibility (or, if they fail to, perhaps, then come back into the social consciousness when they find an era that discovers new relevancy). There is nothing wrong with popularity, but it is not the sole criterion under consideration (though perhaps it has more to do with “soul criterion”).

In talking about visual art, Guardian blogger Jonathan Jones says
- - - - - - -
“The most deadening influence on art in our time is the belief that content matters more than style. If you look back on the artists who have won the Turner prize since the 1980s, or the artists most often mentioned in the media these days, what they have in common is a message. Artists like Marc Quinn, Antony Gormley and Tracey Emin – all have very clear points to make. Once you've understood them, what's left to say?”
- - - - - - -

But does that mean that certain types of mindless music, for instance, which would be more style with no content to speak of – whether it's pointless or just shallow – is as much likely to be “great art” (or “real art” as he describes it) than a symphony by Mahler?

After all, given the imprecision of our language where Priceless can mean both "of great value" and "junk", doesn't Meaningless in this sense mean (loving the irony, here) "having no specific or single meaning," not "being devoid of substance"?