Just a Moment in Time 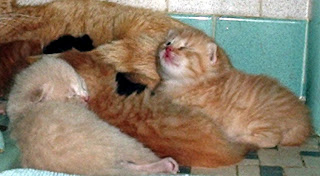 At three minutes and four seconds past 2:00am today, it will be

which will never happen again in our lifetimes unless you plan on being around in a hundred years.

At the moment, however, a quick glimpse into an important moment in the life of a kitten: Day 13 and the eyes are beginning to open. And in this photograph, the first time I really get to glimpse some faces! Mother and the Mighty Handful are doing well -- tentatively Frieda's kittens are named Abel, Baker and Charlie (for the three orange tabbies; though one is darker than the other two, they're basically so far indestinguishable), and, pending gender identifications, Blanche and Guy Noir for the cream-colored tabby and the black one (which may, I think, turn out to be a tortiseshell and therefore likely a female).

Meanwhile plans for completing the move have been put on hold by the arrival of my new side-kick, Hermie the Hernia, who will preclude a great deal of packing much less anything else: I think there may be a new comic short-story in the making dealing with workman's comp insurance regulations, perhaps something Wagnerian...

As we approach Mother's Day next week, I find myself reading Joyce Carol Oates' Missing Mom which I figured would prove cathartic rather than just purely entertaining, now that I find myself living alone in the same house my mom lived alone in, reading her 1,000-plus mysteries, for the past nearly 22 years. More on the book, later.

Moving back to the house I grew up in, I have to admit some of the things I've been finding, sifting through my own stuff that has been stored here (either by me or by my mother) have been surprising to unearth: an interview with me about my compositions when I was having works played by the Harrisburg Symphony in my mid-teens, talking about creativity issues and finding myself almost the exact opposite, now; and what may well be the first piece of my music I ever tried to write down, embarrassingly infantile considering I was just learning the basics of theory and notation, but hey, I was 8 years old... But that's for a later post, too.