One of those Epiphanies 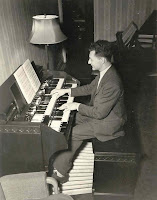 This is a picture I’ve known for a while, perhaps years ago when I didn’t really think too much about it. This is my dad playing the Hammond Organ in the living room of the house I was born in, before I was born. I knew the organ was one that belonged to a friend of the family’s, Jack M, who after the War was building a house in Lemoyne and who’d ordered a Hammond organ from J.H. Troup, the best known music store in town, located on the south end of the square opposite the church.

Also part of the legend was how the organ was supposed to be delivered but Jack’s house wasn’t ready yet, so he asked my dad if he’d be willing to “give it a temporary home” because if Jack said no, the organ would go to the next person on the list and Jack would be moved to the bottom.
My dad, who’d learned to play the piano when he was a kid by watching a player piano and figuring out where to put his fingers when the keys went down, was delighted to help out. During the war, he had had a chance to play a Hammond in the base’s chapel and fell in love with it.

What I didn’t know until I was going through one of my mother’s ubiquitous calendars which she kept like a diary, was when the organ arrived and when it left for Jack’s now-completed house. I would have assumed months but it was only a short time – weeks, really – which puts a more definitive time on when this picture was taken.

But in the week’s following this brief 3-week visit, there are about fifteen references to my dad going over to Jack’s, several times specifically “to play the organ.”

Then there was a week’s vacation in early August – on Monday, “Jack’s for supper – ball game... appt 8:00 to see Wayne Wiegle at Pueblo - organ” followed by a blank Tuesday and then, on Wednesday, “Jack’s at 12:30 - Wayne to audition Curly [my dad’s family nickname] at organ & sign papers for rental” [presumably for an organ at the Pueblo]. The next day, after my mother canned pickles during the afternoon and took my brother (then almost 6) down to my dad’s folks who were going to babysit him, my folks went to the Pueblo at 9:00 for my dad’s “debut at the organ.”

The first time he played as a “professional” musician. She added this note on the opposite page: August 7th, 1947, Norm had his debut playing the organ at the new night club “Pueblo” [then mentioning a friend who stopped in as a customer]. August 8, 1947 – went over much better. Received his first tip ($1.00) from a gentleman who requested ‘Trees.’”

And so my dad’s second career began: he would play at several clubs and restaurants in the area for the next 17 years or so, before the rheumatoid arthritis made it impossible for him to play. When he would go into the hospital for frequent treatments, he talked J.H. Troup’s into bringing in a Hammond so he could play every night for the other patients after dinner, leading them in sing-alongs and playing requests. It was as much therapy for him as it was for them and the room was always packed.

Today, my dad’s birthday, I looked at this picture of him playing Jack’s Hammond in our living room – a defining moment in his life – and realized, if it was taken between April 18th and May 8th, 1947, a month or less before he turned 29, that next week I will turn twice the age my father was in this picture.
Posted by Dick Strawser at 11:31 PM