On the Naming of Cats

It has been a quiet vacation so far at Das Hofkathaus. I’ve been scribbling down some ideas for a new piece but not sure what kind of piece it will be – I’d thought of a short choral piece or collection of pieces; other tidbits could turn into an orchestra piece – too soon to tell. I finished reading a book Wednesday night which I highly recommend (and I’ll mention it later). And a great deal of time was spent watching the kittens. 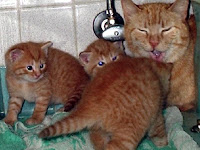 So far, the kittens have explored the bathroom and the immediate periphery of the neighboring bedroom, much to their amazement and delight. As of yet, I have not seen Frieda herself outside the confines of the corner behind the toilet, though I know she must venture forth when she feels it’s safe to eat and use the litter box. Here she is, last week, imparting the Wisdom of the Ages to the three orange tabbies, Abel, Baker and Charlie. “Tales from Behind the Toilet” might not rank up there with, say, “The Silmarillion” but it seems to be helping her kittens make the adjustment to the next stage of their lives.

Already, they have figured out the mysteries of the litter box – theirs, at least (an old baking dish, now retired, pressed like many retirees into new and unusual service). Three of them, so far, have demonstrated they know how to use it and, even better, how to flush. Every now and then, they try to climb into Mamma's and find it a bit of a challenge.

Equally curiously, three of them are already eating adult food, passing up the watered down supposedly kitty-suitable food I’d been putting down for them, soggy-soaked dry bits and watered down canned food. Guy Noir is even eating the adult dry food which surprised me even more, figuring they wouldn’t be ready to eat something like that just yet. Reading all the recipes for post-weaning food, it just seemed like it’d be weeks till they’d get around to real adult food.

Of the five kittens, I have now held all of them, even if only briefly, without any retribution from their mother. Abel, Baker & Charlie are all males, it turns out, but it looks like Blanche and Guy Noir will be undergoing Name Changes soon since I’ve discovered Blanche is a male and Guy is a female and it would just be too confusing to keep explaining that... And since the tortoise-shell isn’t really black-black, maybe I’ll save Guy Noir for some future all-black cat. How many chances are there of having a black and a white cat from the same litter I could call Blanc et Noir? Perhaps I could call these two Alban (which means White or Pale) and Nora (from Noir, meaning Black) – more poetic than the literal German of Weiss und Schwarz... 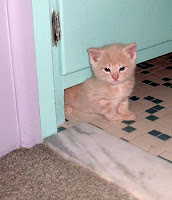 Hmmm, Blake could mean either light or dark and is considered a non-gender-specific name. Theoretically, I could name them BOTH Blake... but that would just be too confusing, period. Oh wait, how about Alban Blake and his lovely sister, Norah Blake?

In the naming of cats, ordinarily I shy away from actual human names. When I was living in Connecticut, it bothered me to hear my neighbor call after Susie like she was a dog – until I realized Susie actually was a dog (I never did find out what his wife’s name was). I did have one cat named Denise – rescued as a stray kitten probably barely two months old – but that was because one of my other cats was Pastiche and from the same litter as, no doubt, Denise’s mother which then made Pastiche her aunt and Denise logically the, er... uhm, well... you get it... 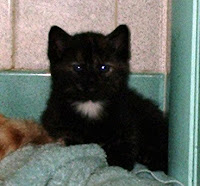 It’s possible Guy Noir may end up being a non-gender-specific pet name like Gremlin and the angelic-looking Blanche something like... Angel (not that there’s anything especially demonic about the tortoise-shell: she’s so innocent looking, it would be an illogical choice of name – then, too, aside from the fact how many cats have I known named Gizmo, I’d need to keep referencing that 1984 film and I hate having to explain out-dated Pop Culture to the next generation.

A friend had once named his ex-stray “Mephistopheles” except he was pronouncing it “meh-FIST-o’-fleas” which was just too much to explain to people who, like me, felt it needed correcting. An actor friend of mine who had just played Macbeth in college had taken in a stray kitten he named Fleance.

I’d already gotten into trouble with past cats’ names, having to spell Chaumleigh for disbelievers or explain how Roquefort got his name. It was plain to see the blind one who could find her way around a room after one exploration should be named Radar.

Of course, like composers coming up with titles for their more abstract pieces, I suppose I could just call them Cat No. 12 & Cat No. 13... 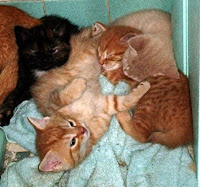 So, as Abel, Baker & Charlie all begin to grow into something less distinct from each other, I watch them all scrambling around the floor and wonder if they will soon earn their names? Until then, I guess, these two’re still Blanche and Guy. And “One of the Orange Tabbies” (or perhaps Larry, Darryl and the other brother, Darryl)... Though of course, Blake & Gaia Noir... has a ring to it...

For everything else, there’s LOLCats...