One Small Step for a Cat, One Giant Step for Kittenhood

The kittens have reached the Month Milestone – actually, today was Day 32. So far, they’ve been shambling and shuffling around their bathroom world for the last few days, getting their sea-legs ready and practicing their wrestling moves (which also means wrestling with anything that moves, including my foot). But last night another milestone was reached: I had left the door open to the master bedroom and turned around to capture the moment from perhaps the wrong angle, rather than capturing what might be thought of as the wonder in their eyes:

Here’s one of the orange tabbies (Baker, I think) looking out at this whole new world they’ve just discovered. For a while, they stayed fairly close to Mom – in fact, one time when she hissed (presumably at me), they all went shuffling back to her as if she’d said “Get back here, NOW!” This time, their sense of adventure won out. 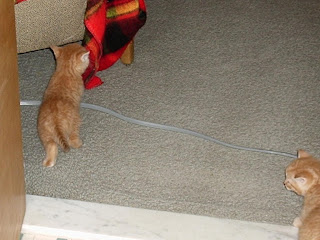 But it was another of the orange tabbies – Charlie (left) – who actually crossed over the threshold and was the first to explore the carpet in the bedroom. He went about two feet, then turned and ran back into the safe and familiar bathroom. His eyes were big like he couldn’t wait to tell everybody else: “you won’t believe what’s out there!” Huge, to those who’s spent all their lives so far underneath a toilet tank...

In a way, I feel a bit of that same excitement and uncertainty, moving back into the house I grew up in, getting my childhood bedroom ready to be my composer’s studio.

There are many reasons I’m glad to be leaving midtown Harrisburg behind me, after 24½ years of living in the same neighborhood – certainly before Break-In Season has gotten underway – but I’m not keen on Suburbia, myself, never was even when I was a kid. Still, the older I get and the more reclusive I become – especially when I want to compose – it’s preferable to the noise and inconsiderateness of city living. It’s not ideally quiet, here: the kids across the street have some fairly noisy motorcycles but they’re not bad; more of a problem is the constant whine of the highway 1/4-mile away which never seems to let up, 24/7. The traffic around the mall is absurd and at times it’s like Christmas Shopping even in April, but I’m used to shopping after work, doing my groceries around midnight even if I detest those self-scanning aisles you have to use then (“please put the item back in the bag...”)

I’m not sorry to no longer be renting, after my latest experience with landlords – the hole in my bathroom ceiling from last December still has the plywood patch over it and the pipes upstairs still leak; the back yard has been mowed once since LAST May – but I have concerns about being a home-owner, now, the financial responsibilities aside.

So, like the kittens, I tend to look around with a sense of awe, especially moving from a small apartment into a house three times as big. I wonder what big changes will be happening in my life, now, two hours before I turn another year older, experiencing my first birthday without my mother here to remind me that I had kept her awake that night until 2am. 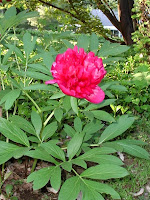 There’s a tiny remnant of a red peony in the back yard, the only plant left from the ones that she had brought to the new house from the old one when we moved in 1960. I know those peonies existed in the back yard when I was a year old because I’ve seen them in old photographs. The story has it they were originally my grandmother’s peonies and Mother had transplanted these from her parents’ old house when they moved after World War II because they had been an important part of her own childhood back yard. That could make this plant, at least originally, almost 88 years old if my grandparents planted them when they bought their first house in 1919, the year my mother was born. There had been three plants – the pink one and the white one died over the years, but the red one is still hanging in there. One flower opened this afternoon, so tomorrow I will cut it and put it on her grave. 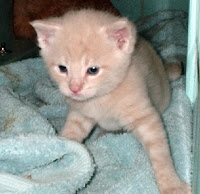 Change does not have to mean better, nor does it have to imply it could be worse: it just means things will be different. And the challenge is to accept it with the sense of wonder as if you’re discovering it all for the first time, and contemplating the possibilities.