A Kaboodle of Kittens: Day 6 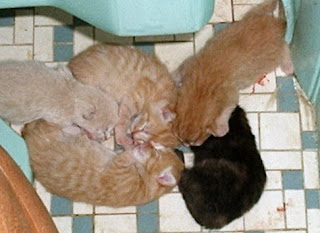 Some years ago, a friend of mine, adopting a stray kitten that had only recently been weaned, told me she had often had cats but had never started one “from scratch.” Several of my cats over the years came to me as kittens or ‘teen-aged’ cats (and all but the first two, strays), yet even though I may have missed the exact “miracle of birth” only by minutes, I have never had the chance to watch kittens grow up from Day One. It has been amazing!

And the opportunities for catblogging on a grand scale!

This morning is “Kittens: Day 6." Of course, I’ve been taking pictures of them every day, documenting their growth even though it’s been a little difficult trying not to disturb them. Frieda, the proud and wary mother of five, is still not used to me or to being in a house. Compared to her last litter, I wonder how this one is faring: with food placed twice a day in a bowl a few feet from her, she at least doesn’t have to wander far to forage and leave the kittens unattended for very long. I also had hoped she would have moved them over to a section of the floor covered with a towel since I imagine the bathroom tiles must be chilly for little kittens, but she chose this corner (which hadn’t occurred to the resident human) just because of its security and basic inaccessibility (at least as far as the resident human is concerned). 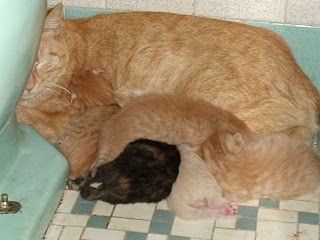 So far, everything seems to be going well. While I was sure there had been two black ones, perhaps the darkest of the three orange tabbies looked even darker on those first two days. On the other hand, perhaps there had been two black ones and one didn’t make it. I was more concerned about not spooking the mother than counting how many furballs surrounded her that Monday morning. I certainly haven’t tried examining them – with my scent on them, it’s possible the mother may refuse to nurse them any more – so I don’t know what genders they may be.

The cream-colored tabby and the black one (which one night, in the flash light, didn’t look all that black – could it be a black tabby? I haven’t noticed that he (or she) has any white anywhere) are the ones I’ve thought about keeping (once before, I’d adopted a mother and her one surviving kitten – the kitten is now 12). If the genders are right, they could end up being named Blanche and Guy Noir.

It seems appropriate starting off life in the house (not a new house to me but a new chapter in my life in it) with an arm-load of kittens. My mother would be fascinated to observe this (at least for a while) if not mighty peeved to realize they’ve taken over her bathroom (as in “they’re so cute, but do they have to be there?”). 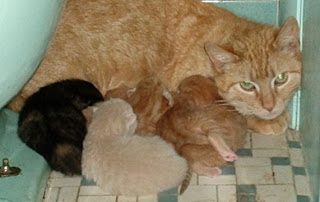 The other cats, filtered from them by the space of the bedroom as well, have not registered any curiosity beyond wondering why I keep disappearing behind this door with a can of food. It will be a challenge, introducing Frieda to the three cats already here, but I want to hold off on that little surprise until the kittens are old enough she won’t feel they’re quite so vulnerable: who knows how many of her kittens were killed before by other stray tomcats? It’s not an easy world out there for newborn cats on the street, all the more reason to consider spaying and neutering your pets!!

But meanwhile, there’s work to do and I must head into it. I think I’m ready, now, to start moving my stuff in – the scores and CDs, the books and OMG the piano, how I miss having that piano!

On Wednesday afternoon, seeing WITF’s nine-foot grand open in the studio, I went in and practiced – well, played through a couple of stock pieces that had been in my repertoire since college days, perhaps, but rarely practiced (I think the last time I seriously practiced was maybe a year and five months ago) – a few Scarlatti sonatas, a few pieces by Schumann (the Arabesque, the Romance in F-sharp, the last movement of the Fantasy in C), some Chopin (selected mazurkas, nocturnes and preludes), some of the Beethoven bagatelles from Op.126.

While I don’t think I’m going to be ready to be performing in public any time soon, at this rate, it was good to know the wounds on my index fingers – incurred last week while snagging a certain stray cat flying around the kitchen – didn’t keep me from getting around the keys. Oh, the scales were rough and the voicing maybe a little more uneven than usual, but at least they were still moving. With signs of arthritis developing, playing the piano more regularly will be good therapy if not for the soul at least for the hands.

And there’s a new piece working its way into my head: I need to start jotting down ideas (some of which I can do without a piano) but I also need to finish these violin and piano pieces I’d stopped working on in December. John Clare and I had talked about having them ready to perform in May but that’s not going to happen...

And tomorrow is Family Day at WITF – I can’t wait for “Take Your Kittens to Work Day”!