More for Mendelssohn's World: Some Videos

This is part of a post over at Mendelssohn's World, the educational outreach program that's coming up in a couple of weeks. I just wanted to post these videos here: the first is a tourist's video from a visit to Fingal's Cave in Scotland (see an aerial view of the island, left), the same cave that Mendelssohn visited in 1829 and turned into his "Hebrides Overture." I get into the difference between what is "Classical" and what is "Romantic" - Right Brain and Left Brain, too. And then end with the Scherzo from the Octet (which is on the program the students will hear on Sept. 16th with Odin Rathnam's West Branch Music Festival musicians. 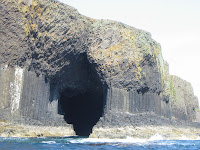 Here are two videos for you – this first one was filmed by someone visiting the Island of Staffa and seeing the cave (see right). It's a cloudy, rainy day (making it more mysterious) and he sweeps the camera around a bit. It's also a little dark looking into the cave but you get to hear someone playing real Scottish bag-pipes inside the cave. Then around 3:00 into the clip, the tide starts to come in: watch the waves but listen to them, too. You only need to watch about a minute of it here, just to get the idea. It's really cool at 5:07, though, where the cameraman is inside the cave, looking out at the sea. Listen to the waves!
- - - - - - -

- - - - - - -
The cave probably hasn't changed much in the 180 years since Mendelssohn saw it and jotted down the thematic idea that eventually became this piece of music. Listen how the music swells, rising and falling like waves.

This video is just the opening 4 minutes, not the whole piece, and it's played by a student orchestra in Belgium. Maybe you can run both of the videos at the same time (starting the first clip around 2:00 in and then starting Mendelssohn's music - you might need to turn the volume down or off on the Cave Video, though)?
- - - - - - -

- - - - - - -
It may not accompany the first video like a film-score, but once you've seen the actual cave and heard the sound of the waves, listen just to the music in the 2nd video and imagine what it is you're hearing the music describe.

This is what we call “program music” - music that tells a story or paints a scene. And this is something that is a “Romantic” (as opposed to a “Classical”) idea.

Now, when Mendelssohn writes an octet for strings – one of the works we'll hear on September 16th – we'll hear an “abstract” work – music that's only about music, not really telling a story. That's a very “Classical” idea.

But when we get to the 3rd movement, the “scherzo” (SKAIR-tzoh), there's a slight change. Scherzo is the Italian word for “joke” - in music, it's something fast, lively, sometimes funny but at least not always so serious.

Mendelssohn told his older sister that this section of the music was inspired by the fairy spirits associated with the old German equivalent of Halloween. It was these lines by the great German poet Goethe (GER-teh) who was also a personal friend of Mendelssohn's: they describe the shadows of elves (or some kind of sprites) barely visible, who then suddenly disappear, as if blown away like leaves in a breeze.

Floating cloud and trailing mist
Are illuminated from above.
Breeze in the foliage and wind in the reeds –
And all is turned to dust.

- - - - - - -
The fact it's inspired by a visual or literary image makes this “Romantic” (a typical Classical composer from the 18th Century wouldn't have done that) but the fact the sound and texture is so clean and the harmony so clear makes it very “Classical.”

You could say this is Mendelssohn using BOTH sides of his brain.

Oh, and did I mention Mendelssohn was 16 when he composed the Octet?