Since I can't get anything longer than 30 characters to post to Twitter and given the time already spent and the frustrations I've had while dealing with that hassle, I might as well have written a full post for the blog...

The news, basically, is this: at 11:45 this morning, I managed to finish the second of the seven songs I've been working on this summer. Despite a couple weeks of expert procrastination and general laziness, I managed to finally complete my setting of Saint-Aimant's “The Lazy Poet.” (The text I'm using is included in this earlier post.)

Part of the problem was trying to create some kind of structure – formally and harmonically – that would reflect the structure of the poem which, despite being about a lazy poet who can barely bring himself to write anything, is a full-fledged sonnet.

Distractions aside, I'd finished the piano part – having spent a month working out the harmonic and formal frame-work of the song – and had only begun setting the first line of the vocal part when, suddenly, I stopped.

After three weeks of doing nothing (as far as the song was concerned), I then picked up and started the voice line over again. Then in three days, I succeeded in setting all fourteen lines of the poem – working out the melodic structure and relating it to the specific harmonies I'd previously composed – and completed it before any further distractions set in.

Part of the problem was creating some kind of arpeggiated accompaniment like an indolent barcarolle but still using my 6-note pitch-groups that are part of my standard musical language. I'd come up with a pattern that could fluctuate as needed, modulate where required and give an overall sense of expectations, much the way standard tonality would. Writing a melody that would fit its own parameters linearly and then ground itself at the right points with the underlying harmonies is no different than how a composer would work when composing in D Major.

But I've been trying to come up with comparable procedures (if not “rules”) for a non-tonal system (or at least a non-traditionally-tonal one) that sounds different on the surface level yet works just as consistently with what we normally think of as traditional music's inner-workings, rather than sounding largely “arbitrary” or “esoteric” as many listeners usually dismiss atonal or serial compositions.

So the linear challenge was to create something that could, first of all, be sung and that worked melodically, reflecting the delivery of the poetic text. That's the primary focus. By limiting myself to certain chords created by the convergence of melody and harmony, I found the possibilities were more effective than just sitting there plunking out more arbitrary options, wondering “how does this one sound?” and “how does that one sound?”

Anyway, now I need to turn the sketches into something legible. I doubt the “Finale Notebook” software I'd been using before will be sufficient for any examples, but I'll see what I can manage – or just scan the handwritten manuscript and post it. Ah, but I need to get a new scanner for that, or maybe just break down and get real music-writing software instead of hand-copying it (which also entails buying a new computer, but hey...). 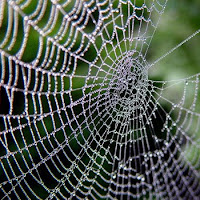 I'm still not sure what to call these songs. The theme of all seven texts is basically “inspiration,” but if I call them “Songs of Inspiration,” people may be expecting up-lifting biblical quotes or texts culled from greeting cards. Inspiration here is more about the creative process – for instance, my lazy poet is balanced by a hard-working web-weaving spider, a more industrious kind of artist – but “Songs of Creativity and Inspiration” sounds more like a sub-title while “Musings” reflects only one aspect of it.

But anyway, this one song is now done: two down and five to go. Now, which will be the next one?

I'm tempted to attack the last one, next, a driving brush-fire of a text that needs incredible energy, both to perform as well as compose. After two months of summer indolence deep in the heart of Dog Days, is this really what the doctor ordered?