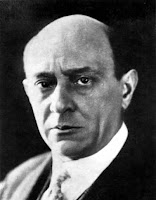 Put Tuesday, September 8th, on your calendar – then WATCH... THIS... SPAAAAACE...

Because right after Labor Day, Thoughts on a Train is going to launch the revised edition of “THE SCHOENBERG CODE,” a serial novel in 12 chapters (a musical parody of Dan Brown's best-selling novel, “The Da Vinci Code”).

Follow a serial killer into the dressing rooms of Carnegie Hall!

Unlock secret messages left behind by composers in their music! (And some that weren't!)

Hear what some insist are only shocking rumors – that Beethoven and his Immortal Beloved had a daughter, and that their descendants live among us today (in fact, one of them could be living next door to you)!

Dr. Dick comes face-to-face with a secret society, the Penguins of God, out to destroy any evidence about it they can find! Are they really behind the deaths of prominent performers of new music?

Can he and his trusty side-kick Buzz Blogster solve the puzzles in time?

Meet Antoinette Avoirdupois, a math major turned violist, who is unaware of her true identity.

Meet Lance Teabag, muck-raking musicologist, who is completely aware of his true identity.

Meet Inspector Hemiola and the International Music Police, intent on solving the murder of three conductors in one night in New York City!

And be prepared to meet Nepomuck and his [shudder] White Viola, a killer instrument that went over to the dark side following a lunch accident in Stradivari's Workshop!

Be prepared! Be very prepared!

That's “The Schoenberg Code” - right here at Thoughts on a Train – starting the day after Labor Day!