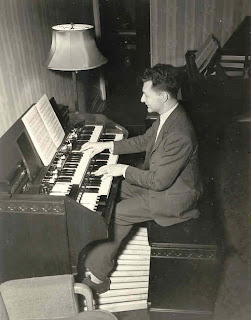 This morning, I realized, in the midst of the drilge of a steady rain, today would be my father’s 90th Birthday.

How does one mark a milestone like that? It is still difficult to imagine him as anything other than the man crippled by rheumatoid arthritis for the last 22 years of his life, a disease that had set in when he was still in his mid-40s.

Many of the photos here in the house, though, are from times before he became ill, when I was still a child, helping me think back to better memories.

This photograph, one of my favorites, was taken two years before I was born, when he was 29, recently moved into the house in Paxtang, their first home, playing a Hammond Organ that was a brand new addition to his life. It amuses me to realize that one of the pieces of furniture I had to dispose of last spring is the chair seen in the foreground: after 60 years or more, it had long outlived its usefulness but still, it was difficult to let it go. I still have that lamp, btw...

In addition to being a respected merchant in uptown Harrisburg, manager of Greenberg’s Boston Store at 3rd & Verbeke, Dad was one of the better known “cocktail organists” in the area. He was not really into classical music, though I still play from a collection of popular works by Chopin he had bought in 1944 – it’s sitting on my piano now, and it’s on the music rack of the piano in my profile photo, taken when I was not yet a year old.

My dad played for various restaurants and clubs – I remember the Blue Mountain, especially – and, as I’ve mentioned in previous posts, even had his own radio show when I was a child and allowed to stay up on Wednesday nights to listen to it, just 15 minutes broadcasting live from the Blue Mountain Hotel (now, Felicita). It didn’t phase me, having a dad who had a radio show: didn’t everybody’s dad have one? Funny how I should end up spending 18 years of my life working at a radio station. On Wednesday nights, my dad took requests from the audience and played them on his radio program; for 18 years, I’ve taken requests from WITF’s radio audience on Wednesday nights.

He didn’t read music – after I started taking piano and theory lessons in 1st Grade, he would often ask me what note this one was, three ledger lines above the staff – and had learned to play the piano by putting his fingers into the slots where the keys would go down on an old player piano. When he was in elementary school, he walked into an assembly program (as I remember the story) and everybody was already singing “Happy Birthday” to one of the teachers. He slipped over onto the piano bench and began to accompany them. One of the teachers asked him how he knew what key they were singing in: he just knew. That was when they realized he had perfect pitch - the ability to identify a pitch just by hearing it.

And yet, without any musical training – the best piano teacher in town, Mrs. Mullen, didn’t want to give him lessons because he had a talent she thought classical training might spoil it – he could listen to a song and play it back, harmony and all. Quite literally, if he asked someone to “hum a few bars” of something for a request, he could continue in the key they were singing, then play the whole song complete with all the chords.

After twelve years of piano lessons, then four years of college followed by two graduate degrees, and having composed operas and symphonies and string quartets – I still can’t do that!

One time, when I was living in New York City during a time my father’s health was rapidly declining and he was no longer able to play, I was playing piano for ballet classes and practicing late one evening. Dick Thomas, who ran the New York School of Ballet and is the father of actor Richard Thomas, came in and jokingly said, “play Melancholy Baby,” but I realized I couldn’t remember anything past the first phrase of the song. I had grown up listening to my dad play hundreds and hundreds of songs but I never heard the words and never really knew the titles – but very often I would hear something years later and think “I remember Dad playing that!” So when I wrote to him, joking about Melancholy Baby, he got out an old list he’d kept of the songs he knew by heart and there, at #1,000, was Melancholy Baby.

We also had a baby grand piano (you can see it in the background of this photo) which my folks had purchased for their new house in 1947, trading in my maternal grandparent’s old upright (purchased in 1919 – I still have the stool and use it today for my own upright piano). By the time I arrived, the organ and the piano were set up side-by-side: Dad would sit at the organ with the keyboard of the piano to his right so he could play harmony and bass on the Hammond and the melody on the piano. (It was an idea he’d gotten from hearing an incredible musician named Al Rondo: he would be surrounded by four different pianos and organs – he was also blind, btw.) I started playing the piano standing with my butt propped up against the organ bench (since there was no piano bench, in this set-up) so my feet could reach the damper pedal. It was such an odd adjustment to go to my piano lessons up the street with Mildred Goho and sit down on an actual piano bench.

I never did learn to play the organ: I simply could not coordinate my hands and feet and keep my backside on the bench! And yet my dad could play two instruments at once. Great peripheral vision? Well, it probably helped he didn’t have to sit there, eyes glued to a score since he couldn’t read music anyway...

When I was a child, I learned to play the Nocturne in E-flat, Op.9/2 by Chopin from this collection he’d bought when he was in the Air Force. I don’t know if he ever tried playing any of it or why he’d bought it in the first place – “Chopin To Remember,” it was called– but he always loved having me play this one piece. I would trot it out for visitors or when we’d go visiting friends who had a piano. I never really practiced enough to actually become a pianist, though at one time I had enough technical ability to get through Stravinsky’s Three Scenes from Petrushka, no mean feat (but that was 30 years ago): when I was 6, I’d already made up my mind I wanted to become a composer because, then, nobody else would know if I was making mistakes.

After I’d written a piece for orchestra, it was my dad who talked to another merchant and musician in town who also played percussion in the Harrisburg Symphony, Al Morrison, who told him to bring me in to a rehearsal to meet the conductor, Edwin McArthur. He invited me to attend any rehearsals I wanted to and took the piece I’d composed called, unimaginatively enough, “Concert Piece,” and performed it with the orchestra at a Young Person’s Concert in 1964. My dad, being the good salesman that he was, took me around to lots of radio stations, since he knew many of the DJs. He called friends of his at the Patriot-News, the local newspaper (then and now) who took pictures and did an interview for the front page of the paper the week before the concert. The Forum was packed, with people filling in the aisles, the biggest crowd I’d ever seen at the Forum, all because of my dad’s efforts.

A few months ago, I went to see the Met Movie-cast of Puccini’s La Boheme and found myself sitting next to Al Morrison who could be in his late-80s or 90s now himself. I told him the story of how he introduced my dad and me to McArthur and he remembered that, asking me if I was still composing. For once, it didn’t bother me, sitting next to him during the broadcast as he hummed along with so many of Puccini’s wonderful tunes. It was just nice to reconnect for that moment with someone from my dad’s past, and my own as well.

The only surviving member of my dad’s family is his youngest brother, Donald, who’s now 82, I believe, and living in Florida.

My mother’s sister, Clara, just turned 90 this past March and I haven’t been able to get in touch with her since she’d recently moved and I don’t know which of these addresses, phone-numbers and e-mails is the current one. She said she’d call me when she got back from Thailand where she went in January to visit her son who lives in Chiangmai. She was pushing 90 and flying to Asia!

And there was e-mail recently from my older brother who just moved into a new home up in the Finger Lakes, including a photograph of his new grandson born in April whom he was holding in his baseball glove. Life goes on.