On the Verge of Vacation-Time

Today would be a good day to sit and read, if I had the time: perhaps tomorrow, when my vacation officially begins, I can do that, except I really want to spend the time writing down some sketches for a new piece or copying the score to my songs, now that they’re complete. Coming home from work later than I’d care to usually means I’m too brain-dead to concentrate. The cats also want to spend their time with me which usually means Murphy is kneading on my chest and either Max or Blanche is spread out on my lap, making it difficult to see the book, proving the old saying “You make a better wall than a window” or however my mother used to say her mother said it. (Door? maybe it was door, not wall...)

And then trying to get deeper into Thomas Mann’s Doctor Faustus is a bit of stretch on short bursts of reading time, trying to sort through the philosophical arguments of Good versus Evil that I’m mired down in, now. This would be my third time starting the book, having completed it only once (and that almost 30 years ago) but you can’t really read just a few paragraphs at a time. I think also the emotional stress it creates is not good for me, at the moment, so I’m putting it aside (again) for now. I’ll get back to Schlepfuss’ exegesis on the existence of evil when my life is a little less stressed.

Another book I’ve wanted to re-read is Tolstoy’s War & Peace. I have two new translations, one by the English writer Anthony Briggs which I’d bought before I’d read much of the criticism about it (like having low-class Russian soldiers chattering away in out-dated Cockney slang that in itself needs a translation in the footnotes) and the much-anticipated, long-awaited translation by the team of Richard Pevear and Larissa Volokhonsky (I’ve enjoyed other translations of theirs in recent years) but now I’m getting bogged down by reading all the original French which had always been translated in the other copies I’ve read. Tolstoy writes much of the aristocratic dialogue in French since at the time, between 1805 and 1812, most of the Russian aristocracy did not speak Russian themselves - so since my French is nearly nil, I find myself dozing off after breaking my concentration to peer down at the footnotes for the translations. In the past few days, I’ve gotten just 46 pages into it – only 1167 pages to go...

Even with the rain and other events of the past week, though, it has been relaxing at the house, despite the cats’ best efforts, watching spring unfold. Some of it was sad - finding the first wood thrush I’ve seen here in years, dead on my back porch after having slammed into the picture window; at least the little yellowthroat warbler managed to recuperate and eventually fly away, with or without a major headache. I decided to plant a few things down in the Great Bare Patch between the Japanese Maple and the Kousa dogwood, transplanting some moss, some of the old-fashioned bleeding hearts that are growing fairly profusely in some areas of the yard, not to mention a few violets. I was thinking of planting some may-apples and other shade-loving plants there, too. Good thing I didn’t – Thursday, the guy who does my lawn mowing came by and, great job that he always does aside, mowed right over them, so I’m back to a nice brown patch of bare earth... 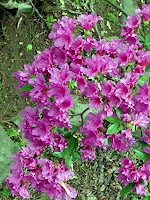 My mother had transplanted a rhododendron from her parents’ yard back in 1970, after they died. I remember this plant from my childhood and the story was it had been transplanted from their first home when they moved in 1946, whenever it may have been originally planted there (their first home was purchased in 1919). So regardless, it’s a fairly old plant. Much to my mother’s disappointment, it’s never really done well here, perhaps too shaded to produce lots of flowers, some years barely noticeable at all. This year, it’s spectacular, as you can tell by this picture I took a couple days ago. I can’t tell whether it’s actually a rhododendron or an azalea...

The one remaining peony – a red one – has come back again, but no buds on it this time, just a few spindly leaves. This too is an old plant originally from my grandmother’s garden, though from a set of peonies my mother remembers growing up with as a child in their back yard. They were well established by the time she was 5, from what I can tell in some family pictures, so this is an old peony, the original stock at least 89 years old. 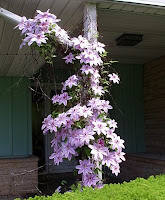 By the front porch is a clematis – the variety is called Nelly Moser (why I remember that, I don’t know) – that goes fitfully from year to year, sometimes a dozen flowers, sometimes a couple dozen or so but never too many at a time. Last week, I noticed it was covered with buds from top to bottom (also unusual) but when I took the 3rd picture of it this morning, I counted 110 open blossoms on the vine, from top to bottom. 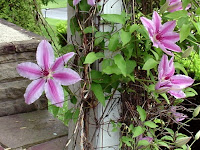 In the back yard, there was a more typical dark purple clematis but it died a slow death over the last few years and didn’t come back two years ago. Last spring, I replaced it with another similar vine which so far is doing nicely - it usually tends to bloom later and longer through the summer. It’s not at a place where I can see it from the house, though, but perhaps by the time I set up the back corner of the porch, it’ll have grown up over the railing.

Last Wednesday, as I was leaving for work, I looked down at the pond and saw three egrets. We often get the typical common egrets here but these looked larger. I couldn’t tell from here if they had black legs or yellow legs and I can never remember which means what. I guess it wouldn’t be a great white heron since they’re basically resident only in the Florida Keys though this one was photographed on Staten Island, so who knows.

Still, if this is the common egret, then from this distance, it could’ve been what I saw.

In the past, I’ve seen some kind of white egrets (that looked smaller than these) both here and all over Wildwood Lake in uptown Harrisburg. On City Island in the years before the baseball stadium and all that development, I’d seen birds like Night Herons and Least Bitterns as well as egrets and once a Great Blue Heron, not quite as close as the time when I was a kid and my dad dragged me along fishing to the Chesapeake Bay one morning, leaving in the dark of night to be there by daybreak: paddling along in a boat, we rounded a clump of grass and reeds and there was this Great Blue Heron - just huge – only a few feet from us. We both froze: in a few seconds, he gave a great yawping honk and took off with a roar of wings, skimming across the bay to a spot a little further out, just close enough so we could see that he was catching fish and we weren’t. I think I was 10 then, and wearing my J.S. Bach sweatshirt...

Other birds I’ve seen in the past few days, in addition to the catbirds who are now nesting in the mounds of forsythia, would include the bluebirds and a nuthatch out front; I hear the wrens but haven’t seen them anywhere, though I keep looking. They might be nesting in the yews or arbor vitae at the lower end of the house where it’s difficult to see them from the bedroom’s bunker-style windows.

The other day, there was a commotion of crows, lots of cawing and a great deal of motion as I looked up to see what was going on, perhaps a dozen of them outside my bedroom window by the big maple. Clearly they were upset about something so I peered out the window and saw a large red-tailed hawk on the ground that was being continually dive-bombed by them - one even hit it on the back of the head. While I’m no fan of hawks, still, I felt I should try to rescue it or perhaps rescue whatever it was it had caught. By the time I ran around to the side of the house, it flew off over the back of my neighbors’ yard, a squirrel tail trailing from its talons. I had wondered if it had caught a baby crow or maybe the ginger cat from the neighbors-across-the-street though that would probably be too big for this particular hawk.

In the days since then, I haven’t seen as many squirrels on my back porch and I wonder which nest this one had been from: there’s one in the oak tree east of my property, but most of the squirrels I see come from my north-side neighbor’s cherry tree, whether they nest there or not. My back yard is fairly overgrown with tall trees and lots of shrubs the birds can go hide in, but the front is wide open, making anything crossing from those neighbors easy prey to hawks. But they need to eat, too, so I try to be philosophical about it, reminding myself that Nature for all its beauty is often violent and cruel.

Meanwhile, the groundhog, a true DIY kind of guy, is renovating his burrow, throwing more dirt up on my porch: who needs a back-hoe? I remember when we first moved in here, my mother had borrowed a live-trap from somebody and caught the first groundhog who was burrowing in this spot, and she hauled this snarling and hissing mass of fur and teeth down the road to the stream about a half-mile away and let him go. Our one neighbor laughed when she told him about it – “He probably beat you back to the house!” I wonder if this one, whom I call LowPax Louie (or is it Louise?), is a direct descendant of the one Mother had attempted to transport?

Time to get to work – last day before the 8-day weekend of my vacation!