Sunday was just such a beautiful sunny day. It’s days like that that make this my favorite time of year: cloudy, rainy, chilly, damp days like Saturday, not so much.

There have been Mays in the past where we might have 4 or 5 days with sunlight, the rest if not outright rain, then always the grim possibility of rain. April Showers bring May Showers... and still, by August, we’ll be in a drought. It happened several times back in the ‘80s, not something new with all the political buzz-words of today’s ecological scene: the effects of Global Warming did not begin just when somebody coined the term.

Unfortunately, most of the flowers I enjoy have already faded in between the April Showers. The mounds of forsythia in my back yard were brilliant yellow for about two weeks. My neighbor’s magnolia made it worth while to stand on my drive-way and take deep breaths to savor its aroma, always more striking late at night when I arrived home from work, but barely for a week. The neighbor behind me has a flowering cherry tree that was brilliantly pink for the past week, but yesterday morning much of that corner of my yard was covered with what looked like pink snow as the petals faded and dropped. 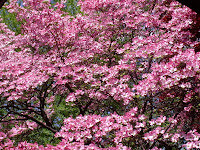 This is the time of year, too late now, I think of trees and shrubs I’d like to plant in the yards – Redbud, Mock-Orange, another pink dogwood, perhaps. I look out and see the leaves coming out on my Japanese Red Maple and wonder how much longer I’ll have it – when we planted it in 1960 or so, we were told it might live 25-30 years. This year, there are a number of seedlings that survived the mild winter here in Central Pennsylvania, so I will transplant them to a bare patch of dirt that swings around behind the parent tree and the Kousa Dogwood (a shapely oriental variety with ivory-colored flowers that come out later in the season: it’s leaves, the first to show, are just now beginning to develop) so that perhaps, when the time comes, there will be other trees there to replace them.

When I was a kid and, like any teen-ager, detested the weekly ritual of grass-mowing, I joked that, if it were my house, I would plant trees all over the place, kill the grass and turn it into a woodland setting. My mother and I seriously thought of getting something called “Meadow-in-a-Can” and spreading the seeds out across the dry, sun-baked front yard where the summer grass was green only over the septic tank. It seemed such a waste of water to refresh the dandelions and plantains that proved far hardier than grass. A can of such seeds apparently was introduced in 1982. I remember, in the early-80s, walking past a house on one of the back country roads where a friend of mine had once lived but was now apparently empty, and seeing the whole back yard ablaze with cosmos, coneflowers, milkweed and numerous other colorful wildflowers. (Here's a forum about the topic, posted by someone living in New Jersey: some interesting things to consider.)

I was delighted, last week, to discover a New York Times article about a guy who hasn't mowed his yard since the Kennedy Administration - 45 years ago! He is an advocate of moss instead of grass, and moss is something I have in a number of places around my back-porch. There are areas where I don't need it, so I'm going to take a shovel and scoop it off, then transplant it to the Great Big Bare Spot between the maple and the kousa: perhaps it will take hold, there? I do not water my grass (it needs to be seriously reseeded and fertilized, anyway) but this article says a moss lawn “needs ‘a fraction, one percent or less’ of the 10,000 gallons (beyond rainwater) that the E.P.A. estimates a suburban grass lawn drinks annually.”

Of course, the soil here is barely that – mostly shale and in dry spells, back-breaking to dig in. I planted a little garden last spring but what didn't die for lack of drainage, the rabbits mowed down - all the seedlings, the ferns pruned back to the point there was nothing higher than an inch or two. They apparently dislike bleeding heart, either the old fashioned variety which is thriving all over the place, or the pure-white variation of the standard form blooming under the maple (see photo). The pachysandra that I added where it had once flourished has held its own if not actually started spreading but I notice other patches nearby are now dying out. The new clematis, replacing one that had died after 40-some years of inattention, seems to be thriving, so far. The old one out front with its light and lacy lilac flowers is back for another year (it must be about as old) and covered with buds. The lone surviving red peony, from the original stock my grandmother had planted in her first garden in 1919, has finally sprouted but this time with no buds. 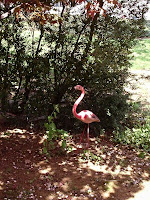 Yesterday, I put the flamingo out – Floyd, a genuine cast-iron 1955-era Florida souvenir, not your (sniff) plastic, corner supermarket variety – and now the bench is back under the tree. There hasn’t been time to go running around to the usual nurseries – some of which would involve too much gas, as fuel hits $3.59-3.64 here – and at this point I’m not sure This Old Back, still a bother, is up for a lot of digging and planting (though, as usual, a friend will be doing most of that for me again this year). Perhaps later today, if I can lug a few planters and pots around with the help of my little red wagon (a hand-me-down from my brother who got it new, like, 65 years ago), I will plant the moon glory seeds (night blooming morning-glory-like vines with brilliant white flowers 6" across) for the back porch.

One of the things on the agenda is making daily use of the treadmill, currently housed in a corner of the living room and looking out on the back yard. It’s great to put bird feed out in the planter and watch them flock to it – the bag of seed lists 10-12 different birds that would be attracted to it and I get 8 or 9 of them, though the most frequent visitors, not mentioned by the seed company, are the squirrels (not even flying squirrels). The chipmunk (or chipnun, as the case may be) has resurfaced after a long hibernation, making use of the luxurious abode created by Low Pax Louie under the one euonymous and behind the iris. Louie himself has yet to be seen, not even surfacing on February 2nd, but his handiwork was much in evidence last month after he opened up the holes I’d filled shut and soaked until the plug became hard as adobe. It’s amazing how much used cat litter you can pour down a groundhog hole...

Later this morning, then, I hope to spend a little time sitting on the bench, reading, back permitting – though the book I’m currently trying to put a dent in, Thomas Mann’s Doctor Faustus, may not be the easiest spring reading material, now past the introductory chapters (a literary schlog in the best of times) of this fictional biography of an imaginary composer and now into the section how music came to be his calling. (At the moment, there is his first music teacher, a native of Ephrata PA with its description of a musical system that evolved around the cloisters there!) This will be my third time starting the book: I'd read the whole thing when I lived in New York City in the late-'70s, and started to read James Woods’ new translation when it first came out but, due to one thing and another, put it aside more out of time than interest. We'll see what happens this time around: since it was such a major facet of Alex Ross’ The Rest Is Noise, it seemed appropriate to reaquaint myself with its details. 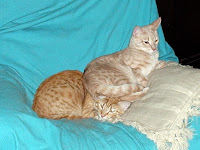 Yesterday, I also managed to catch two of the year-old kittens on the blue recliner: Baker had been firmly settled into the chair but Guy decided he liked that spot, too, since he curls up their frequently. Little brothers can be so annoying...

There are other things I need to tend to, also, vying for my time: having finished the short score draft of Evidence of Things Not Seen, I started the full score of the song cycle yesterday before I decided it was too beautiful outside to work inside: then it occurred to me, my old copying desk, a draft-table I’d bought at a Connecticut tag sale in 1975 for $5 is still in the basement. Maybe I can set it up in the sequestered portion of the back porch and work there?