On the 4th Day of Christmas: Another Violin Piece on the Front Burner

After waking up to find the dense fog from last night had dissipated – fog so thick, whether it inspired me to have pea soup for lunch today or not, I could hardly tell there were houses across the road if it hadn’t been for their Christmas lights – I saw four large crows in the faint light of dawn, strutting around my front yard before taking off with great yawps to disappear around the corner of the house. Four cawing birds, indeed.

Yesterday was overall a blah day. The weather was blah, my energy level was appropriately blah and anything I attempted to do met with an equal and insurmountable blahness. In the evening, I watched TV, something I have never really done for the past seven or eight years beyond catching the news, and after two hours I found myself so annoyed at the constant repetition of the same commercials or the fact that, switching over to PBS to watch a couple of British sit-coms realized for as little as I’ve watched TV in the past 20 years, I had seen both these episodes and new exactly what was coming next (as if the formulas weren’t predictable enough). So instead, I put on a DVD that had arrived in the mail that day, a performance of John Adams’ opera, Dr. Atomic. I watched just the first act but I’ll post about that later. 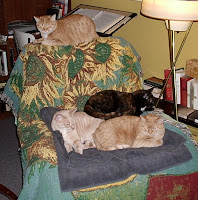 The chair behind my computer desk, covered with a sunflower afghan and ostensibly placed there so I’d have a place to sit-and-think when I’m writing or maybe needing to take a break to read or on rare occasions listen to a CD, is usually full of cats. In this picture, there are four cats sitting-and-thinking for me: Abel on the back of the chair, Freddy and Blanche on the seat with their mother, Frieda the fur-bearing cantaloupe, in the foreground. When I took this picture, Charlie and Max were stretched out on the desk between the keyboard and the monitor.

Much of the evening was spent in quality time with a few of the cats. While Abel, Baker and Frieda flopped into a furry orange puddle at the opposite end of the couch, Charlie, the alpha of the kitten band (had I realized this when they were born, I would have named him Abel instead), was relegated to a spot closer to the back of the couch once Max, one of the three older cats and therefore more senior than Charlie, curled up tight against my right side. But each got annoyed when I started petting or scratching the other so I tried to keep my right arm between them to more easily alternate the attention.

Coming back from dinner tonight, I saw the flash of wild eyes caught in the headlights as I pulled up the driveway, though rather low to the ground for deer. Two weekends ago, there were four doe in the yard. Tonight, as I turned the lights toward the eyes, it looked like a deer, but a very short one. Ah, turned out she was resting in the grass: with a stiff clamber, she slowly got to her feet and stretched before I saw the other three, likewise relaxing in the grass and dead leaves behind the Japanese maple. I didn’t want to scare them off, so I just quietly pulled into the garage but then, without the headlights, I was no longer able to see them.

Today had been a less blah if still overcast and unseasonably warm day, feeling as if it was always on the verge of a downpour. Early in the morning, I had settled down at the piano to do some composing. Last weekend, I started the last of the pieces for violin and piano and while I had figured out about 18 measures of this short piece since then, the thought occurred to me, as it had done during Christmases past, to return briefly to a choral work, “A Christmas Story,” which I’d begun in 2005 then started over and reworked in 2006. This time, after jotting down a few ideas for one of the sections that came to me on Christmas Day, I thought I would try to finish the violin piece first, then come back to spend more concentrated time on the choral piece. It would be more practical, perhaps, to use this time to write some piano pieces, but I was never a particularly practical person, much less composer.

This short violin piece, however, took shape quickly: a second scherzo that’s only two minutes long, it consists of four recognizably different sections, each one cut up and interwoven to form a kaleidoscopic form shifting quickly back and forth from a very fast section to a very slow, almost static one, to another one that’s more rhythmic to another one that is more by contrast lyrical. While the static one has no sense of tempo, the other three feel to be each in a different tempo and all of them reflect different moods.

Considering how small the whole piece is, it doesn’t give each section much chance to establish itself, so it has to be a series of easily discernable fragments, creating a quirky interlude that seems not as technically structured as the first three pieces. Since the other pieces all have titles, I was at a loss how to characterize this one: originally, the scurrying first section was going to give it the nickname “A Little Nightmare Music,” though that has already been used by Peter Schickele in his catalogue of P.D.Q. Bach’s music. Once I realized this was not the predominant sound of this movement nor was the suspended, static section all that suspenseful, I thought perhaps “Kaleidoscope” might be more inclusive. Being a scherzo (literally, a joke), I thought having a two minute piece called “Four Interludes” might be humorously accurate.

While my music is not tonal in the traditional sense (if in any sense other than my own), I still wanted to have some kind of tonal organization. Tonality implies a referential central pitch, something a piece begins and ends in and to which other sections, modulating however many ways they might, in some relationship to that center. In the classical era, this might be fairly basic and easily obvious, but as the 19th Century pulled everything else apart, the sense of this “center” did not always hold, either. Though Wagner’s music might be tonal in a nominal sense, sometimes you were often at sea as to what key you might be in at any given moment in between the beginning and ending.

The tonality of a piece or a passage from it can be defined by the progression of its harmonies but in the absence of standard harmonic practice, it can also be implied by emphasizing a particular pitch, a note that might be in the right places at the right times. In this particular piece, I decided at the mid-point of each brief segment, regardless of which of the four “interludes” it may be, would be the note C, either as part of a triad (since you could harmonize a C as part of a C major or minor triad, an A minor, F Major or minor or A-flat Major triad, plus other, more non-traditional chords. One form of choral structure I had used consistently in the Aria and Chaconne was a major triad with an added tritone – a G-flat Major triad with a C-natural. Since there are fifteen of these segments, I will need that many ways of harmonizing the pitch, C...

So that’s how I came up with the title for the piece – the “Four C Interludes,” not necessarily as an homage to Benjamin Britten’s Peter Grimes. It occurred to me, though, that the structure of my piece works in a similar way to his first interlude, depicting the sea at dawn, with blocks of recognizably contrasting elements that flow in and out of one another to create its own form.

It also reminded me one of my Facebook friends, Steve Gregoropoulos (who’d contributed to an earlier post here on his experience meeting Olivier Messiaen and Elliott Carter), mentioned he was looking forward to the newly released film, The Curious Case of Benjamin Britten. I joked that I wasn’t sure how well Brad Pitt would do in the title role of a composer who wrote his last works as a young man, starting with the opera Birth in Venice, not to mention one of his operas that had been turned into the movie, Grimes of the Heart, but figured it couldn’t be any worse than Sylvester Stallone’s turn in the 1997 film, Copland. Stallone must be more versatile than I would originally have given him credit for, after all those films about Rachmaninoff, also playing Elliott Carter in the 2000 re-make of Get Carter when, 50 years after the original film, people were still having trouble “getting” Carter. (Perhaps it’s time for another visit to Stravinsky’s Tavern...)