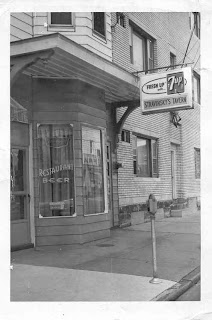 Years ago when I was still an undergraduate in college, a friend had been driving through one of the mining towns in Eastern Pennsylvania - I don't remember which one, but St. Clair sticks in my mind - when he drove past this bar on one of the side streets. Seeing its sign, Stravinsky's Tavern, he had to stop and take a picture of it. This was long before the days of cell phones and digital cameras. I still have the original photo on my desk.

We wondered what it would be like walking through these rather unassuming doors to see a small, bald-headed man with a big grin ready to take our drink orders. 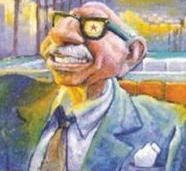 And so that is how the first story came about, how Igor Stravinsky gave up his cosmopolitan life-style to live in a small Pennsylvania coal town, run a bar and write music on an old upright in the back room. Curiously enough, other composers and cultural figures appear to have done the same and before long, the bar was inhabited by such regulars as Darius Milhaud, Sir Edward Elgar, Sibelius, Mussorgsky, Schubert and Mozart, even the author Thomas Mann, all engaging in so much Bar Talk.

Remembering those childhood days when you'd go to the grocery store and run into your 2nd grade teacher, surprised to find that people like this actually existed outside the classroom (and eat food!), I started wondering what it would be like to have composers like Beethoven or Bach show up in our every day lives. Like having a classical music radio station run by the composers themselves or, given the turmoil in today's stock market, following Beethoven to his appointment with his financial and spiritual adviser, Brother Ken Yasperidyme. As the CEOs of America's Big 3 Automakers beg for bail-outs on Capitol Hill, they might learn something from Johann Sebastian Bach's tinkering with technology, trying to develop a more fugue-efficient car.

And so I put all of these into a collection called, simply, Stravinsky's Tavern.

Here are links to the individual stories: