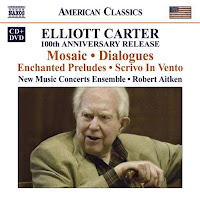 If Thoughts on a Train had a Pick-of-the-Month CD, this would be it. An all-Carter disc from Naxos with eight short works (each between 2½ and 6 minutes long) and two rather more substantial pieces (12 and 14 minutes long, respectively), it is an excellent collection from Carter’s most recent catalogue, five of them composed in the last decade, the earliest dating from 1984 when he was a mere 75 and when most people would have been enjoying their retirement.

There are solo works for flute, clarinet, bass clarinet, violin and cello but also two concerto-like works: one for piano and 18 instruments (“Dialogues,” written in 2004) and another for harp and 7 instruments (“Mosaic” from 2005). The excellent performers are members of the New Music Concerts Ensemble based in Toronto and conducted by flutist Robert Aitken.

If you shop on line, take note of this special offer. And as they say on television, “but wait, there’s more!”

I hadn’t been aware of it when I snatched it from the racks at my local Border’s store, surprised (and delighted) to see it in stock, but it also contains a DVD with a 22-minute documentary that includes part of an on-stage conversation between conductor Robert Aitken and composer Elliott Carter recorded at the Toronto performance in 2006, as well as the concert’s performances of “Mosaic” and “Dialogues.”

Carter’s music is often regarded as formidable and forbidding, terribly complex (so complex that some critics have said you’d need a slide-rule to appreciate it) and as challenging to listen to as it is to play. Granted, it’s not easy-listening and it may be challenging and off-putting on first hearing for its lack of stylistic familiarity, but like any music that you leave your mind open to, it speaks more directly to the mind and heart than a lot of contemporary music of the past fifty years if you approach it on its own terms. If you’re looking for tunes, no, it’s not going to work, but then there’s very little on the opposite end of the spectrum with its simplicity of minimalism that would attract you, either.

There are a few points this DVD-interview-documentary point out that I think might help someone approach this music. First of all, Carter is a comfortably amiable man who is fascinated by the music that is the result of the process, not by the process itself, where it comes from. Aitken points out that in all the years he’s known and worked with Carter – this concert was Carter’s sixth visit to Toronto and the New Music Concerts series – “not once had he ever complained about the metric relationship between one tempo and another,” what most performers consider the most problematic issue in figuring out how to play his music (the transition from one tempo to a successive tempo is called metric modulation but often he’ll write two simultaneous tempos where the parts may be written out in ratios of, say, 5 notes to the beat in one part to 7 notes in another). “He’s more concerned with the color, the dynamic and the meaning” of the music rather than all these other, more technical details.

Being a flutist, Aitken had, on several occasions, asked Carter about writing something for solo flute. Acknowledging that Carter’s style requires counterpoint, he still pressed the idea on him. Even though Carter hemmed and hawed, Aitken suggested “why don’t you write the last movement for the Bach Solo Sonata?” Three week later, Carter called him and said “It’s just about done.” It was inspired by a Petrarch sonnet and entitled “Scrivo in vento,” loosely translatable as “writing in the wind,” serendipitously premiered by Aitken on Petrarch’s 687th birthday, not far from where the poet lived.

There are other literary allusions in Carter’s works, at least in their titles: speaking of “Winds,” he explains he had already begun working on his Concerto for Orchestra when he started to read the poem by St. John Perse entitled “Winds” (Vents, in the original French) and Carter said it struck him “this is so much like what I’m writing, I thought I would shape the piece similar to the poem,” though the idea for the music existed before he had read the poem.

Asked what he was reading now, Carter replied “Rabelais. I’ve never read him before and I’m finding it surprising and very entertaining.” In Old French, Aitken asks? “Well, I have an edition that is Old French on one side and New [Modern] French on the other,” though he can understand much of the Old French fairly well, except some of the “rather indecent words” are not very clear. “You know them in New French?” Aitken chides him as the audience laughs. Carter replies with his own laugh, “more or less!”

For a piano piece written for Peter Serkin, he was inspired by the memories contained in Proust’s “In Search of Lost Time” (or “Remembrance of Things Past” in the old translation), a chapter called “Intermittences of the Heart” when the narrator, as a child, recalls his grandmother and all the kindnesses she had done for him, especially that one magical yet disappointing summer they went to the beach at Balbec. The memories are brought about by buttoning his shoes which she used to help him with (“in those days,” he explained, “they used to button their shoes”) and he thought these associations – this beautiful paragraph that goes on for pages and pages – was suitable for a piece of music, “not,” he concludes, “that it actually buttons the shoes...”

The conversation about “Mosaic,” the most recent piece on the program (written the year before this concert) is also insightful for anyone who thinks of Carter as a purely abstract intellectual. It wasn’t a pre-conceived form: “you have to allow the composer some freedom, you know - I don’t know why I wrote it that way.” Designed to feature the harp, that was what he focused on, but he knew “there were these poor people [the other musicians] who ought to have something interesting to play, too... I hate to have all these people sitting around not doing anything and I like to give them something that will entertain them or interest them to play – that’s something in my mind, too, like many other nutty things.”

You would think somebody who writes music as precise and detailed as his music is would be very strict about how a piece is performed. But he say “there’s Hamlet which can be interpreted in 20 different ways, perhaps, but it’s still Hamlet.” The variables and possibilities of interpretation intrigue him: the score is basically “a message to the performer of certain intentions of the composer’s imagination: the performer then has to add his own imagination.” Of course he wants them to play it as closely as possible to the score as he’s written it, but “I do think even so it’s possible to have it interpreted in many different ways.”

And where does a new piece begin for Elliott Carter? Surprisingly, much the same way one would have begun for Beethoven. Often, he says a new piece comes to him “when I’m walking on the street” (this, by the way, from a man who was 97 at the time). He thinks about texture, how the instruments might sound together – maybe there’s some literary idea or association that gives him a spark, but not themes, at least not themes as people normally think of them today (a very 19th Century concept). Carter deals more in “fragments of themes,” a few small shapes he might expand into longer and longer lines. But basically, he admits “I think it’s different each time.”

One of the technical problems in writing for the harp, getting back specifically to the new piece, “Mosaic”, is the fact this is basically a diatonic instrument in a chromatic world. Unlike the piano which has strings and keys for every pitch in the chromatic scale, a harp would be too vast and cumbersome an instrument for that, so it has strings only for, basically, the white keys of the piano and then a series of pedals bristling around the base of the harp, foot-level, for each pitch. The D Pedal, for instance, will affect all the D Strings on the harp and depending on whether the pedal is up, down or in the middle will determine whether it will be D-sharp, D-flat or D-natural. Consequently, playing something that is as intensely chromatic as Carter’s music involves a lot of fancy foot-work.

As he said, even though it took less time to write this piece than many other pieces of comparable length (“why, I couldn’t tell you”), he was “trying to keep the lady from pedaling on every note.” To which Aitken responds with a chuckle, “You did a very bad job, I have to tell you.”

“Well, it’s almost as if she’s driving a car,” the composer replies. If it made it difficult to play, you wouldn’t know it from the performance or for that matter, from watching the video.

The only problem with the video, though, is the frequent reliance on kaleidoscopic special effects playing on the title, “Mosaic.” The video for “Dialogues” is just straightforward and therefore less distracting to the music. Not, however, a big concern considering the quality and seeming effortlessness of the performance along with the opportunity to hear and see a piece by a composer like Elliott Carter. There is something about having a “document” like this interview, however, that is so incredibly special. What would our appreciation be of, say, Beethoven’s or Bach’s music if we could have a video of an interview with them, watching and listening to them talk about what inspired them, what they thought about when writing the music we know, and discovering in general just what normal people composers really can be?

Extracts transcribed from the interview between Robert Aitken and Elliott Carter produced by Moving Headshot Productions, Inc, from the Naxos CD/DVD “Elliott Carter 100th Anniversary Release” (which is not called a “100th Birthday Release” because, recorded in 2006, who knew for sure, you know...)
Posted by Dick Strawser at 2:30 PM