Meanwhile, Blogging at the Symphony 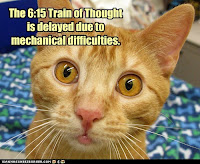 This photograph - found at the LOLcats' website - was too good to pass up, considering this blog...

There have been many thoughts at Dr. Dick Plaza but not many trains, for some reason, for which I apologize, sort of. There are numerous excuses, laziness aside, ranging from work on the revised novel, "The Lost Chord" to increasing annoyance with technical difficulties posting here on blogspot (like pasting a full post into the dashboard's post-thingee and finding out there are no paragraph breaks which then have to be inserted individually, 'graph by 'graph; or having many of the embed-links for the video clips disappear each time I go in to edit a post...). But I've been told I complain too much so we'll leave it at that.

Meanwhile, I've been blogging elsewhere: there's a concert coming up this weekend with the Harrisburg Symphony that includes three "character portraits" (Saturday at 8pm, Sunday at 3pm at the Forum in downtown Harrisburg) for which I'll be doing a pre-concert talk an hour before each performance. You can read posts about Aram Khachaturian's Spartacus, Aaron Copland's Billy the Kid and Richard Strauss' Don Quixote over at the Harrisburg Symphony Blog.

Each post contains a brief pod-cast with conductor Stuart Malina as well as a video clip of performances of the works on the program. There's ballet performance of the ever-popular "Adagio" from Spartacus which opens Khachaturian's 2nd Suite, as well as the complete Billy the Kid Orchestral Suite and Don Quixote, a set of "fantastical variations on a knightly theme" for cello and orchestra. For the Strauss, I go through each variation with a description of events from Cervantes' novel as Strauss transformed them into music.

My talk will probably focus on the men behind the men behind the music - looking into how the composers reacted to the characters they were setting to music. Since the concert is marketed as "The Don's Deeds," I'm thinking of calling my talk "Dr. Dick's Dudes."