The Doomsday Symphony: On the Installment Plan 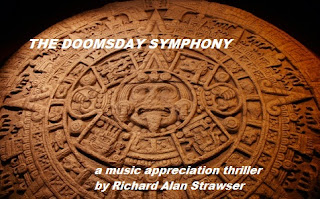 It could mean the end of Classical Music as we know it and, if Mahler's latest symphony makes it back for its world premiere on December 21st, 2012, it could just be the end of the world, period.

Well, my latest complete novel is now ready to be posted on the installment plan here on Thoughts on a Train.

You can read the first installment here.

It is set on a hot summer day in July of 2010. The narrator is a middle-aged former composer, recently laid off, named T. Richard Kerr.

(Originally, he was T. Rutherford Cranleigh but I changed the name when I began my next novel and decided I liked this name better. After all, why shouldn’t a classical music detective be named after the old musical form, Ricercar, which means “to seek”?)

Off to visit Victor Crevecoeur, the son of his old friend and mentor, Sebastian Crevecoeur, still living in the old Pocono farmhouse his father had bought as a country retreat from life in New York City, Kerr is to attend a summer concert that afternoon (Victor’s daughter, Zoe, is the concertmaster of the orchestra) and then, after a dinner party at the farmhouse, hear a read-through of a newly discovered piano quintet by Sebastian Crevecoeur, though Victor is being very mysterious about it. Sebastian had committed suicide over twenty-five years before and Kerr had never heard him mention writing something like a piano quintet, before. When he had a chance to see the score, he noticed the completion date on the last page was December 19th, 2009 – only six months ago!

The read-through is interrupted when one of the guests, a once-famous medium known for communing with dead composers, Mary Rowberson, screams and faints, claiming to have sensed evil in the room and then receiving a message for Kerr from Sebastian Crevecoeur – something involving “New Coalton” which turns out to be an old abandoned mining town not far away.

Victor, meanwhile, has disappeared and with him, the score of his father’s quintet.

Meanwhile, Klavdia Klangfarben, unable to find work as a forensic musicologist, has accepted a job as a “Femme Fatale for Hire” with SHMRG, one of the more ruthless music licensing organizations intent on cornering the classical music market, run by the villainous CEO, N. Ron Steele. Their plan is to kill off the Great Composers of the Past by going back in time and eliminating them before they became famous, then replacing their music with lesser composers whose music is already licensed only through SHMRG. Klangfarben has discovered a way this can be done: there’s a portal to a parallel universe where dead composers have gone and where they still continue to compose. Her sidekick is a lawyer from there, Abner Kedaver, who had worked for both Brahms and Mahler, who will help her gain access to this parallel universe, Harmonia-IV.

This portal happens to be in New Coalton in the Pennsylvania Poconos.

Kerr, meanwhile, driving Zoe and her son Xaq and their friend Cameron home, gets lost and ends up where New Coalton once stood. Quite by accident, they discover this strange blue wavy light and end up at the other end of the rabbit hole in Harmonia-IV where they are met by Sebastian Crevecoeur.

He has enlisted Kerr’s help because Victor (Zoe’s father) died while talking to Mozart over at Stravinsky’s Tavern. But they will also need to stop Klangfarben and Kedaver from going back in time to kill Bach, Wagner, Mozart and Beethoven. Without them, numerous other composers would also never be the same if these four were no longer there to influence or inspire them.

In the meantime, Gustav Mahler had completed a new symphony which contains a series of dramatic chords that an apocalyptically oriented philosopher [sic] is convinced will bring about the destruction of the universe by unleashing the final cataclysm if it’s performed on December 21st, 2012.

Mahler’s score is then stolen with the intent of taking it back to Earth and scheduling its premiere for that very day.

Now it is up to Kerr and his friends to rescue Classical Music from SHMRG’s plot and save the world from Mahler’s new symphony!

Previously, I’d written two other music appreciation thrillers, both parodies of recent novels by Dan Brown. The Schoenberg Code appeared shortly before the movie based on Brown’s The Da Vinci Code was released and which single-handedly killed the constant buzz of the best-selling book. Then, shortly after Brown’s The Lost Symbol was published in 2009, I wrote my own parody, The Lost Chord which I also started to post on the blog. However, I was dissatisfied with this last one and have since decided to completely rewrite it, not as a parody but as my own independent story, changing the plot but keeping many of the characters. Since I’m about half-way through the new and improved version of The Lost Chord, I thought it was about time I did something with The Doomsday Symphony. 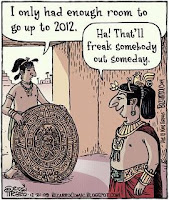 Having written two parodies, I decided I should try my hand at a more or less original one. This became The Doomsday Symphony, given all the hype about the End of the World on December 21st, 2012, thanks to the Mayan calendar.

The novel consists of 71 chapters divided into four movements (well, it is a symphony) complete with a prologue (or Prelude). You can begin reading it from the beginning here and following the continuity links.

By the way, did I mention this is a comedy?

You can read a post about the different characters' names, here.

The novel, "The Doomsday Symphony," a music appreciation thriller written between 2010 and 2011, is the sole supposedly intellectual property of its author, Richard Alan Strawser.
© 2012
Posted by Dick Strawser at 6:18 AM