The Doomsday Symphony: Table of Contents 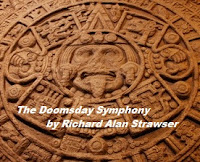 Follow these links for the individual chapters of my latest music appreciation thriller, The Doomsday Symphony.

Prelude and 1st Movement - Chapter 1: At SHMRG Headquarters, Klavdia Klangfarben, former forensic musicologist and now femme fatale, has accepted a contract to kill off the Great Composers of the Past. Meanwhile, T. Richard Kerr, a middle-aged former composer and college professor, is driving up to the Poconos to take in a summer concert on a very hot summer afternoon. Afterward, there's dinner with friends and a read-through of a newly discovered Piano Quintet by his old friend and mentor, Sebastian Crevecoeur, who had died over twenty-five years ago.

Chapter 2. The concert is a valiant performance even if the soloist, Sandro Tigramsci-Tulini, has never succeeded in fulfilling his early promise, despite what he or his agent thinks. Kerr meets a few of the guests who'll be joining Sebastian's son, Victor, for dinner back at the farmhouse.

Chapter 4. Richard Kerr arrived at the Crevecoeur farmhouse, and meets some old friends. But Kerr, paging through the manuscript Sebastian's son Victor had shown him, sees it was dedicated to his granddaughter Zoe, then notices the completion date for this composition was December 19th, 2009.

Chapter 5.Interrupted by the arrival of the last guest, Victor leads Kerr out to the dining room. During the course of the dinner, the conversation ranges from their reactions to the afternoon's performance, the typical mistrust many people have for any new music, and the hoopla over the impending Apocalypse on Dec. 21st, 2012, according to the Mayan calendar. Afterward, everyone moves into the parlor as the musicians get ready to read through Sebastian Crevercoeur's "new" Piano Quintet.

Chapter 6.Back to New York City, where Klavdia Klangfarben and her invisible friend, Abner Kedaver, have left the offices of SHMRG. She recalls how one of her professors had stumbled upon the possible existence of a parallel universe and arranged for Kedaver to be her guide, there.

Chapter 7. Back at the Crevecoeur farmhouse, Kerr's mind is full of all kinds of thoughts as he listens to his friend's music, mostly wondering just what it is, considering he'd died over 25 years ago and the piece was completed only six months ago. The performance is brought to a halt when Mary Rowberson, one of the guests, screams and faints. When Kerr turns around, Victor is missing.

Chapter 8. As everyone attends to Ms. Rowberson, she explains it wasn't the music that affected her emotionally like that: she's sensed that something evil has happened, making the seeming disappearance of their host all the more ominous. The guests break into small groups to send out search parties. Zoe, Victor's daughter and the ensemble's first violinist, asks Kerr to be especially careful checking out the pond.

Chapter 9. A flashback to Sebastian's life at the end of his career. On a hot summer night, he walks down to the farm's pond and, after filling his pockets with rocks, wades out into the cool, rejuvenating water.

Chapter 10. Kerr, along with Zoe's student Cameron, finds nothing at the pond. No one else finds any sign of him, either. Assuming he'll return shortly, just having gone out for some air, they are dismayed to discover that his cell phone was left in Sebastian's study - and the score Victor had shown Kerr earlier, then locked in a drawer, was missing. They decide to call the police. While waiting, Kerr glances over one of the quintet's violin parts when Zoe remarks how fresh it sounded to her, like it could have been written last year.

Chapter 11. The police arrive at the farmhouse and begin the investigation. Then Detective Jenna Sainte-Croix arrives, questioning the witnesses and wondering why the concern if the man's only been missing for a short time. Then Ms. Rowberson goes into a trance and delivers a message from Sebastian Crevecoeur for Kerr, mentioning "New Coalton" which turns out to be an old abandoned mining town down the road.

Chapter 12. A flashback to the summer morning when Sebastian's wife, Alina, discovers his body down at the pond. Back in the present, everybody begins to leave for home, some guests staying at the farmhouse, when Zoe - who was going to catch a red-eye flight from Allentown Airport to Chicago - discovers her old clunker of a car won't start, in fact can't be budged. So Kerr offers her and her son Xaq a ride to the airport with plans to drop Cameron off to catch a train into Philadelphia.

Chapter 13. On the ride to the airport, Zoe talks about her relationship with her father, about her concerns for her career and how important this audition in Chicago is to her, but a few miles from the farmhouse and already Kerr is getting lost...

Chapter 14. Klavdia Klangfarben and her ghostly companion, the invisible Abner Kedaver, are driving through Manhattan, on their way to complete their mission. She considers how this is going to be accomplished - killing off the Great Composers of the Past who are, after all, already dead - and remembers her childhood interest in time travel, wondering, if she could go back in time, would her mother still be alive today?

Chapter 15. Cameron's back-seat reverie - about his friends, Zoe and Xaq and about names - is interrupted by the appearance of the two policemen from the farmhouse - Officers Tennant and Schickhaus. Seems there's been an accident and the road is closed. They try to explain a detour to Kerr but he seems hopeless: the car doesn't even have GPS. Looking out on the dark woods surrounding them, Cameron doesn't think this is a good place to get lost...

Chapter 16.Not surprisingly, they get lost but, surprisingly, end up in New Coalton, the ghost town Ms. Rowberson had mentioned in her weird message from Sebastian Crevecoeur. Having stopped, Xaq announces he has to find a tree, selecting an old stump out in the middle of the field. Odd, too, because then the air in front of him starts shimmering...

Chapter 17. Rogers Kent-Clarke, the conductor, stops off for a beer on the way back to his apartment and runs into Detective Jenna Ste.-Croix. Curious, he asks her about that ghost town that Ms. Rowberson had mentioned - New Coalton? Telling him where it's located, she doesn't think there's any significance to her mentioning it. After she leaves, Kent-Clarke decides he's going to check it out. Meanwhile, Xaq is trying to explain what happened just as they're interrupted by a short man carrying a violin case who's mumbling about being late for a rehearsal. Then he disappears into thin air right at the tree stump. Then it gets weirder.

Chapter 18. Now it's really weird. They're on the edge of some city but they fell through some kind of worm-hole, so is it underground, or...? The meet the violinist again (actually, violist) who's going to a rehearsal of Beethoven's latest symphony - his 39th. Then they're greeted by Sebastian Crevecoeur who seems very much alive though he assures them he is, indeed, dead. "Welcome to Harmonia-IV." It's a parallel universe where many of the dead composers go. And Sebastian left Victor, Zoe's dad, over at Stravinsky's Tavern, talking to Mozart. Meanwhile, Klangfarben and Kedaver are on their way. He tries to explain how time-travel works but she still won't let him drive the car.

Chapter 19. Sebastian Crevecoeur leads them on a walk through Harmonia-IV as they head over to Stravinsky's Tavern to pick up Victor, explaining various details along the way - like invisibility: since Harmonians can't be seen by living people when they cross-over to Earth, Sebastian admits to having had a little fun at Ms. Rowberson's expense.

Posted by Dick Strawser at 6:18 PM