Stuart Malina conducts the Harrisburg Symphony in Prokofiev's 5th Symphony at the first concert of their new season - Saturday, Sept. 24th at 8pm and Sunday, Sept. 25th at 3pm at the Forum.

You can read my introductory post on the Harrisburg Symphony Blog which also includes audio clips of an old 1960s recording of the complete symphony conducted by David Oistrakh (seen below, playing chess with the composer). 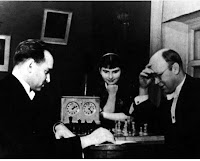 Prokofiev's 5th Symphony quickly became one of his most popular and frequently performed works. Coming at the end of World War II, it was perhaps one of the most composer's happiest moments, artistically.

But two things happened after the War.

Now, back when he was 3 years old, Prokofiev fell, hitting his head against an iron trunk. He carried the resulting bump on his forehead till he was 28 years old, a few years after he’d composed his notorious 1st Piano Concerto and his “Classical” Symphony (someone joked that perhaps his talent lay in that bump).

Shortly after the successful premiere of his 5th Symphony in mid-January, 1945, Prokofiev fell as the result of a spell brought on by overwork and his typically high blood pressure, suffering such a severe concussion that he almost died. Complicated by the heart attack he’d suffered in the spring of 1941 and which had seriously impeded his work on the opera, War and Peace, he now found his health quickly deteriorating. Basically, he never really recovered from this episode.

His 6th Symphony in the dark key of E-flat Minor, often considered the 5th‘s “dark twin,” was completed and premiered in 1947, even though it had been begun before he started work on what became the 5th. It’s probably more representative of a “war symphony,” especially hearing the first two movements as an elegy on the tragic losses of war.

But then came the political fallout after the war.

Andrei Zhdanov was a party official under Stalin who became the director of the Soviet Cultural Policy in 1946 and one of his first actions was to censor the poet Anna Akhmatova. “The only conflict that is possible in Soviet culture,” he said, “is the conflict between good and best.”

Given that, how could government officials react to Prokofiev’s new symphony, his 6th?

In February 1948, four months after the 6th Symphony was premiered, Zhdanov initiated purges against several musicians over the issue of “formalism” which sent both Shostakovich and Prokofiev into creative tail-spins. During the different artistic crises of the ‘30s, both were young enough to either argue their positions or adapt, but now, both of them older and in ill-health, they more or less retreated.

(You can read more about this in relation to Shostakovich and his 5th and 10th Symphonies.)

For many American listeners, it may be difficult to understand this.

Here is Aram Khachaturian – himself an Armenian, not a Russian, who composed during the Soviet era – writing about the definition of the “Soviet Composer”:

--- --- --- --- ---
“In the Soviet Union, the composer occupies a place of honor. He benefits by the attention and solicitude of the people. His material comfort is assured. He knows that his work is necessary and highly appreciated by Society. Moreover, he has, of course, deep consciousness of his responsibility towards Society, towards history and towards humanity.”
--- --- --- --- ---

During the 1930s, when the new nation was still struggling to create itself barely a decade after the Bolsheviks’ unexpected success in toppling the weak provisional government following the overthrow of the Tsar in February 1917, the question was one of frequent debate and discussion as if Art, usually evolving over generations and centuries of cultural development, could be created from above for lack of time.

In 1934, the Composers’ Union, the Communist Party’s bureaucratic organization that had oversight of official ideology regarding music and composers, suggested the following guidelines:

--- --- --- --- ---
“The main attention of the Soviet composer must be directed toward the victorious progressive principles of reality, towards all that is heroic, bright and beautiful. This distinguishes the spiritual world of Soviet man and must be embodied in musical images full of beauty and strength. Socialist Realism demands an implacable struggle against folk-negating modernistic direction modernistic directions that are typical of the decay of contemporary bourgeois art, against subservience and servility towards modern bourgeois culture.”
--- --- --- --- ---

Now, depending on your viewpoint, much of this could be defined different ways: certainly anything that tweaked bourgeois (Western) conventions must be suitable for Soviet consumption. What was more “real” than the stories of real people – or taking great dramatic themes and translating them into modern-day situations?

This “modernistic direction” was soon labeled Formalism, a reliance on bourgeois (or simply “Western”) art forms that were primarily abstract: the structure of a sonata or a procedure like the fugue were examples of “Formalism” to be avoided. Art that was abstract was not “real.”

Attitudes about such issues may change with time and may change drastically and unexpectedly. We might joke about “I didn’t get the memo” but in many cases, artists found themselves in very real danger, politically and personally, if the winds of musical aesthetics changed.

This attack on “formalism” or “bourgeois influences” first began in 1936 with the attack in the press on Shostakovich’s Lady Macbeth of the Mtsensk District and, more or less as a result, hoping to win back good favor, he composed his 5th Symphony. (Again, for more details, read this earlier post at Thoughts on a Train already mentioned).

As it happened, Prokofiev left the Soviet Union in 1918 feeling that, given the strife following the Revolution and the ensuing Civil War there, there was no room for his revolutionary approach to music (besides, all his premieres were being postponed because of the war, anyway). But after failing to find success much less recognition in the United States and creative satisfaction in France, Prokofiev made the decision to return to the Soviet Union in 1935, hoping to reconnect with his Russian roots.

Keep in mind, Prokofiev was no longer the enfant terrible he had been in his early-20s: he was now 44 years old – is it possible this mellowing had something to do with the traditional mid-life crisis? Who knows, but it’s difficult to balance the Prokofiev who said music must be “tuneful, simply and comprehensibly tuneful” with the Prokofiev who’d composed his 2nd Symphony in Paris, a symphony patterned on Beethoven’s last piano sonata, begun when he was 33.

And what is this “formalism” Shostakovich was accused of?

In Western usage, musicologically speaking, it implies music that is defined by the composer’s attention to structural details – its form as well as, say, use of counterpoint or boundary-stretching harmonies – but in the Soviet Union, the implication was music that was too intellectual to be appreciated by the masses - and the Communists were all about the Masses (not to confused with Catholic liturgical music, just to point out how confusing terminologies can be). In fact, Prokofiev quipped that “formalism is music that people cannot understand on first hearing.”

In 1936, Shostakovich was being held up as the Party’s Whipping Boy though soon enough, not just artists in the Soviet Union were contending with the purges brought on by Stalin’s paranoia, often referred to as The Great Terror.

So Prokofiev returned to find his old country violently in the throes of reinventing itself.

And what did Prokofiev write, once he was back on this soil that was once Russia? Unlike Shostakovich, who was becoming primarily a symphonist – and a symphony was considered a bourgeois Western form – Prokofiev composed film scores (attractive to the Masses), large-scale choral works based on texts by “approved Soviet poets” (inspiring to the Masses) and a children’s tale set to music called Peter and the Wolf.

He did not write a symphony until the end of World War II when Party regulations about music were, for some reason, relaxed. Aside from his “Classical” Symphony, his next three symphonies had all been written in Paris: the 2nd, inspired by Beethoven’s Op.111, was a symphony of “iron and steel.” On the surface, this sounded like a subject that should appeal to the new Soviet aesthetic, keeping in mind something like Mosolov’s The Iron Foundry depicting in exact detail the noises of a busy factory, considered a masterpiece of the Revolution’s denouncement of bourgeois Romanticism of the 1920s but which would hardly pass muster with the attitudes of the ‘30s and ‘40s.

His 3rd Symphony, written in 1928, was basically a four-movement suite based on material from the opera, The Fiery Angel which he was having trouble getting produced. The 4th is also based on stage music rather than being something symphonically conceived (I mean, in the traditional sense of a symphony), taking music from the ballet, The Prodigal Son, which he premiered in 1930 but which he revised so completely in 1946, following the success of his new 5th Symphony, that he even gave it a new opus number.

So between 1924 (still in Paris) and 1944 (eight years after the prodigal Prokofiev returned to the Soviet Union) he had not really risked writing anything so formalistically bourgeois as a formally conceived abstract Symphony.

Could this be why Prokofiev decided to make his comments about "singing the praises of the free and happy Man," to give his new symphonic symphony an acceptable socialist patina?

The next great shift in Soviet aesthetics occurred in 1948 and this time, Zhdanov and the bureaucrats came down hard on Shostakovich and Prokofiev, accusing them and several others of the crime of Formalism, essentially banning the performance of their music in Soviet concert halls.

His health issues aside, Prokofiev never really regained his creative spark, though he continued to compose – especially inspired by the young cellist, Mstislav Rostropovich – but even politically correct works we would consider the product of a Party Hack were not well received either popularly or critically.

In the end, even in death, Stalin had the last laugh.

Stalin’s death was announced on March 5th, 1953 – he may have died the night before – and Prokofiev, suffering the after-effects of a cerebral hemorrhage, died hours later. A music periodical reported the composer’s death on page 116 – the first 115 pages were about Stalin. Even the crowds gathering in Red Square mourning the death of their leader, not far from where Prokofiev had lived, made it impossible for his friends to even remove the body from his home to take him to the headquarters of the Composers’ Union for the funeral until three days later.

Hardly anyone in the great Soviet Masses knew that the composer whose 5th Symphony was so popular and appealing – and somehow lacking in formalism – had died.