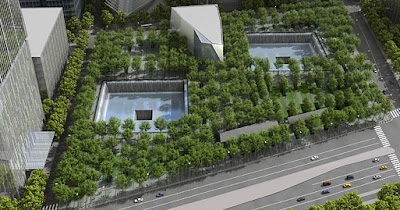 It is challenging, choosing music for September 11th. The Mozart Requiem which the Harrisburg Symphony is performing today with the Susquehanna Chorale is probably as good a piece as any, free of direct associations with the event. It was performed at the "Rolling Requiem" on the first anniversary where choirs in each time zone around the world performed Mozart's Requiem at 9am local time in tribute to those who died and those who survived. It also, musically, reminds us of the composer's life - likewise cut short - dying at the age of 35 before he was able to complete the work.

In this previous post, I describe my own experiences answering the question "Where were you on September 11th?" And also my musical response, composing a string quartet inspired by the emotions experienced on that day which, when I attended rehearsals for the piece in New York City (the performance was here in Harrisburg, PA), I made my pilgrimage to Ground Zero, sat in the silent space behind Trinity Church, overlooking where the Trade Center once stood, and started reading through the score of my quartet before realizing this was not the place to be listening to this music.

At that time, I worked the evening shift for a local classical music radio station. Like most people, probably, I sat there numbly listening to the reports, the discussion of events, the endless repetition, the speculation, the rage, the fear, the paranoia and the unfolding tragedy - the World Trade Center, the Pentagon and the plane that crashed in a field in rural Pennsylvania that might have, except for the bravery of its passengers, ended up in the Capitol or the White House. I had heard news reports, I had been watching television when the towers collapsed and I heard a reporter for NPR suggest the death toll - which so far nobody else was talking about, as I recall - that could reach 50,000.

Knowing that eventually we would return to broadcasting classical music during the day and evening, I couldn't even begin to think about what might be suitable - certainly not "regular programming as scheduled." This was not the time to return to normal quite so soon even if it were days later.

The first piece of music I listened to at my desk that afternoon, sorting through the possibilities, was this:
- - - - -

- - - - -
And then I realized, this was the first time I had cried all day, regardless of what I had seen or heard or thought about throughout the day. And I realized the intense power of music to cleanse the soul.

Today, ten years later, I do not need to be reminded of what that day was like. Even without the associations of lost friends, I can remember everything, watching it re-unfold in front of me like an unwanted film even when I try to shut my eyes against it.

For me, silence - after hearing this short, simple musical prayer - is the best memorial.