On the 2nd Day of Christmas

There were two doves sitting in the Japanese Maple waiting for me to put seed out in the bird-feeder this morning. It is pouring-down rain right now – better than most of what has been saturating much of the country the past few days – and in the low-40s: most of the snow is gone now, though yesterday it was at least a white Christmas if not a pretty one. The ice-storm everyone had dreaded didn't seem to materialize but with the temperatures hovering just above freezing, I was not one to venture out onto the roads, traffic or no traffic. It was a very quiet day spent with the cats who enjoyed playing with their new catnip toys; in the spirit of the holiday, three of them gave me furballs in return...

Not one to watch much TV – though too much in the evenings, lately – I decided to watch two movies: a version of Babes in Toyland with Laurel and Hardy (I decided to pass on the one scheduled for later in the day with Drew Barrymore and Keanu Reeves) and “The Bishop's Wife” with Cary Grant as an angel answering the prayers of a bemused bishop, David Niven. I found myself identifying with the old professor played by Monty Woolley. For more modern fare, I had listened to David Sedaris' “Santaland Diaries” the day before. But otherwise, not much.

It's not Christmas that bothers me: it's the way it is celebrated. There are two Christmases: the religious holiday and its spirit of “Peace on Earth” and the secular holiday which is all about the Accumulation of Stuff and, beyond the idea that three kings once brought presents to a baby in Bethlehem, has very little to do with the other.I find it ironic that, as a not very religious person, the materialism of the holiday as its observed offends me.

While some Christians would complain that saying “Happy Holidays” instead of “Merry Christmas” is the secularists' attempt to destroy Christmas, I rarely see anything religious in all the advertising for all the sales that dominates the life-style of many Americans for at least one month out of the year, beyond wishing people a “Merry Christmas” as they urge them to come spend their money in these difficult times in order to keep the economy afloat.

As a sign of these desperate times, a snowstorm the weekend before Christmas could be accused of nearly destroying the American Economy's delicate recovery because people couldn't get out to do their shopping. Late on Christmas Eve, I was still getting e-mail urging me to shop on-line even as midnight was approaching: didn't it matter it wouldn't be there for anyone to open on Christmas Morning?

After getting back from having dinner with some friends on Christmas Eve, I was just about to drop off to sleep around 2am when I heard this great roar and the house shook with a clanging that lasted a few seconds. The Ghost of Christmas Past, the first of my visitors this night? No, it was the water softener going into its monthly cycling, a little louder than usual in the stillness of the night.

For me, it is music that gets me in the holiday spirit, whether it's the old popular Christmas songs that all seem to be from the '40s and '50s but still dominate (if not saturate) the atmosphere today, or those classical settings of sacred texts pertaining to the actual Christmas holiday.

It had only begun with the Susquehanna Chorale's concert which I attended at Market Square Church on the 18th – especially with the Fantasia on Christmas Carols by Ralph Vaughan Williams, based on British carols not as familiar to us today (which is why they were favorites of RVW's) and the 'signature piece' which ends each of their Christmas concerts, Malcolm Sargent's arrangement of “Silent Night” (you can listen to another performance of it here, beginning about 1:07 into the clip). In between, it would hardly matter what they sang because I knew it would be sung well even if the idea of me participating in the audience sing-along carols reminded me of Saturday Night Live's “Have Yourself a Merry Little Christmas” sung by Kermit the Frog and Robert de Niro.

On Christmas Eve, while making an ill-timed run to the bank and the grocery store and then out to some friends for dinner, I listened to the Waverly Consort's medieval Christmas pageant which I'd seen twice and have listened to often.

Since I'd spent much of Christmas Day composing (more on that, later), I didn't want to settle down to listen to any more music until after I was finished for the day, so it was late evening by the time I got around to it, listening to only two pieces.

The first was one I hadn't really listened to before: Danish composer Poul Ruder's “Christmas Gospel,” a 1994 textless orchestral work, may not have been suitable for playing on the radio because it sounds more like the soundtrack for a science fiction film rather than a short silent film of the Christmas Story. It's only 10 minutes long and the program book marks the timing cues where each aspect of the story begins: some of them are only a few seconds long and they do little more than set a cinematographic mood whether it's the arrival of Mary and Joseph at the stable, the labor contractions (oddly, one of the longer sections of the score) which become more dissonant until resolving in a radiant major chord with the birth of Christ, or the part that is often overlooked in modern-day tellings, Herod's Massacre of the Innocents.

And while it doesn't sound very "Christmassy" and did in fact sound more like a science-fiction filmscore, I figured to some the story of the Virgin Birth surrounded by angels may indeed seem like science-fiction: which could explain why someone as rational and logical as Thomas Jefferson would edit the Mysteries out of his copy of the Bible including the magic of the nativity with its angels, focusing on the humanistic elements of the story – this from one of this country's  founding fathers whose viewpoint is often overlooked when today's religious discussions argue about returning to the faith on which this country was founded. 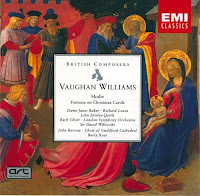 The major work for my evening's playlist was going to be Ralph Vaughan Williams' telling of the same story but with Biblical texts interspersed with poetic meditations (much like Bach would have done in his cantatas, actually). Entitled “Hodie” (from the text, “Hodie Christus natus est,” This Day Christ Is Born), it's a vital hour-long work he completed it in 1954 when he was 81 (you can read more about it, here; you can also listen to clips of a recent Naxos recording here.)

For me, this is as much a holiday tradition for me as Handel's “Messiah” is for others, not that one's likely to hear a live performance of it around here.

Before going to bed, another tradition: listening to Dylan Thomas reading his “A Child's Christmas in Wales.”