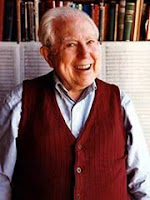 “When I decided to become a composer, my parents were very much opposed to this – I talked it over with them and I think on the whole they were probably right because to be a composer in America especially at that time, was a very difficult thing to do, impossible to make a living as a composer of serious music. I was very determined to do this and my parents were very determined to stop me. However, I did succeed in doing it in any case and they relented a little bit and began to help me, especially my mother who felt that if I was SO determined to do this, I would be very unhappy if I didn't...”

(The composer, Elliott Carter, reminiscing, in Frank Sheffer's A Labyrinth of Time - see below.)

It's been a quiet year for Elliott Carter, apparently – no daily tread of interviewers pounding their beat to his door for an interview with the revered master in the year leading up to his 100th Birthday, no almost constant coverage in the arts press, keeping us posted on every new piece he had been composing, that was being premiered or performed somewhere in the world in advance of the centennial of his birth. 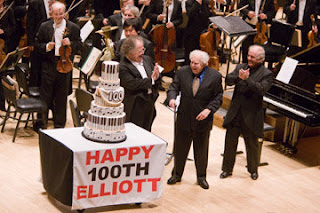 In fact, since then, I've seen nothing in preparation for his birthday today – he turns 101 today and while that is not as significant to most people (I suppose they'll wait until he turns 110 or 125 for the next one), I find it surprising that, on his “B'day 101” I can find nothing in the press on-line regarding what he's been up to this past year: is he still composing? What has he written? What has been premiered? I'm still hoping for the 6th String Quartet which I remember reading was being commissioned by the Pacifica Quartet (who recently recorded “all 5” of the quartets for Naxos – I had heard them play "all 5" of them last year, just as I had “all 3” of them when he had turned 70 and most people felt the 3rd was likely to be his last quartet - one can still hope!).

- - - - - - -
UPDATE: 12-14-2009
Someone at New Music Box told me, through their Facebook page, 'rumor has it he just completed a new wind quintet.' Jerry Bowles, at Sequenza 21, commenting on a post that said Carter was 'hale, hearty and busily composing,' mentioned that Bridge Records will be releasing Vol. 8 in their Carter series with some of his most recent works, each of them a premiere recording!
- - - - - - -

You can read my previous posts about Elliott Carter: about the Carter Quartets here, and about hearing the premiere of his Clarinet Quintet here, about his 100th Birthday, here, and a friend's report of a birthday concert, here.

So here are some new links to some “old interviews” and programs.

For those who are new to Carter, here is a very good radio documentary from 1983 though I think the newest music dates from 1978 or so, the time I was living in New York and sat behind the composer to hear “all 3” of his string quartets and heard the world premiere of his vocal work, “Syringa,” which is included at the end of this broadcast, recorded with the same performers I'd heard at its premiere.

It's almost 2 hours, divided into two parts, proceeding chronologically, containing several excerpts as well as complete performances of works like the Sonata for Flute, Oboe Cello and Harpsichord, the 2nd String Quartet, the Symphony of 3 Orchestras and Syringa, a fascinating work setting the words of John Ashberry in the mezzo-soprano's voice and Greek texts (in Greek, no less) in the bass's voice.

An important biographical documentary is the film A Labyrinth of Time by Frank Sheffer, released in 2004, which is available here from Naxos.

You can see the whole 90 minute film in these 4 clips at this Chinese web-site: if you get the page with all the various anime ads and distractions, click on “full screen view” (the rectangle icon within single quotes).

Happy Birthday, Mr. Carter – I hope this day finds you well and happy.
Posted by Dick Strawser at 8:40 AM