Though the mystique of “a long weekend” has long been lost on me since the days I was unceremoniously retired, “Labor Day” strikes me as something that might seem nostalgic to many people in today's economic reality.

Much of this weekend has been spent laboring away on posts over at Mendelssohn's World, the educational outreach part of a musical program for Harrisburg School District's John Harris High School. The performance of Mendelssohn's music with Odin Rathnam and

The first West Branch Music Festival takes place this month, with their Mendelssohn Program this Sunday at 4pm. They'll be playing along the banks of this river (see right) - Odin may go fishing during intermission - and then coming down to Harrisburg to play the program for 9th & 10th grade students at Harrisburg High School.

(They'll be doing a second program along the West Branch the next weekend.)

Then, too, the first of my brief courses as part of Harrisburg Area Community College's continuing education program comes up starting September 17th, so it's gonna be a busy month for Dr. Dick...

After writing and posting a series of “study questions” on Mendelssohn this morning, I calculated I've written over 45,296 words about Mendelssohn in the last 11 days.

National Novel Writing Month – a program that tries to cajole you into writing a novel during the month of November – has a goal of 50,000 words in 30 days.

AND... I'm getting ready to start posting the revised edition of THE SCHOENBERG CODE starting tomorrow, another 47,000 words or so... Fortunately, it's already written, just waiting for one last editing run-through before I start posting it on the installment plan tomorrow! 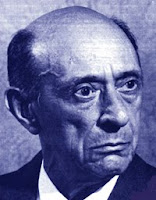 Yes, it's a serial novel. In 12 chapters. And why, yes, it involves a serial killer. Funny you should ask, because serial composer Arnold Schoenberg is only one aspect of the plot.

And yes, it's a parody of Dan Brown's “Da Vinci Code.” (In case you haven't heard, he has a new book coming out next week called “The Lost Symbol.”)

Dan Brown's earlier book had been on the Best Seller Lists for like ever, so when the movie was about to be released three years ago, I thought it was high time to read the book. The result? An idea for writing a parody.

I retold the plot in ways that mirror certain similar secrets in a musical context. As one person described it, “Pulp Fiction for Music Geeks,” though I don't think you have to be a music geek to enjoy the parody though it might help with many of the bad puns throughout.

At the moment, I'm feeling a little too brain-fried to be posting much more, here, so let's call it a day and
Posted by Dick Strawser at 1:34 PM