Dr. Dick, Back in the Class Room: Fall Classes at HACC

I know Autumn doesn't start officially until September 22nd but it sure feels like Fall in this part of the suburbs. And School has already begun!

I've been busy the past week for a new music education outreach program with a performance of some music by Felix Mendelssohn, writing down a lot of stuff about Mendelssohn, his life and times for the teachers and students involved in this project at the Harrisburg School District's John Harris High School – posted over at MENDELSSOHN'S WORLD – so far, about 30,000 words in 18 different posts.

to Wildwood Lake, just north of town, hence the name – it's not like it's a crazy party school or anything... is it?)

The first one is in just two weeks – a “Survey of 20th Century Music” that meets three consecutive Thursday evenings at 7pm (September 17th, 24th and October 1st. For more information, you can can check out this link.

It's basically geared to people who are not that experienced with 20th Century Music but have some background in music – who enjoy going to concerts and listening to classical music – but are not musicians themselves. I'll be talking about the different basic styles of the last century and how they evolved from the 19th Century – and maybe try to see where music may be going this century. It's fascinates me to think that what we consider the real start of 20th Century music didn't happen until The Rite of Spring or Pierrot Lunaire, and they both happened in 1913... And here we are, only in 2009!

One is an “Introduction to the Basic Language of Music” and is geared for music lovers who may not read music but enjoy listening to it and wonder what the mystery is all about. Not sure I'll answer all that, but we'll be looking at different things from musical notation to the building-blocks of form, pointing out different things to listen to along the way. There are just two meetings – on Thursdays, November 12th & 19th – so it's not going to be a comprehensive college-level course, just an introduction. You can find out more about it, here. 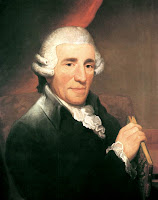 The last one this semester is an introduction to Franz Josef Haydn. 2009 is the 200th Anniversary of his death. The November concert of the Harrisburg Symphony is a performance of his great oratorio “The Creation.” I'll be presenting two lectures on Haydn's music – one, an overview of his life and style, looking mostly at the symphonies and string quartets; the second is primarily about “The Creation.” It meets on Thursday's , November 11th and 18th with the concerts that weekend, Nov. 21st & 22nd. People signing up for the class will have the opportunity to take in the Friday night rehearsal. The registration fee is for the class only and does not include the concert's ticket price. You can sign up for it, here.