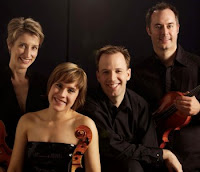 It's been a busy day, here, posting about the Summer Music 2009 concerts this week with Market Square Concerts and trying to get caught up on a few things this past week.

Mostly, I was getting behind due to some problems with the 'new' computer knocked out by a virus and the 'old backup' computer which was being pretty sluggish and at times non-functional. After the nastiness on July 3rd, trying to post something about the Harrisburg Symphony's concert-in-the-rain, I was unable to get in and do much posting after 10 hours of downloading tribulations - what I was able to get done took about three or four times longer than usual because of the slowness. But then, not only did my brother Norm, passing through the area, help me get rid of a nasty old Trojan on the new one, he installed Linux' Ubuntu on the 'new' PC so I can now say "buh-bye" to Microsoft Windows as my main cybersqueeze which has always been a kind of uncomfortable shot-gun affair, anyway. Aside from a few issues with the possible purchase of certain music-writing software like Sibelius or Finale which seem to be only Microsoft friendly (and no, I can't afford to go out and buy a new MAC just for that, yet), I can honestly say now, "I don't do Windows."

So here are some of the posts I've been working on recently:

A summary of Summer Music 2009's concerts this week

For tomorrow's concert at Market Square Church which begins at 6pm (ahem, note: 6:00 pm EDT as in SIX o'clock) with an "up-close/personal" post about the Shostakovich Piano Quintet which Stuart Malina will be playing with the Fry Street Quartet (wonderful videos including the Fugue being played by Glenn Gould and an unnamed quartet and of the scherzo with Martha Argerich, Joshua Bell & Various & Sundry Friends)

For Saturday's 8pm concert at the Glen Allen Mill (directions included in the summary post) with an "up-close/personal" post about the Chausson Concerto in D for Violin, Piano & String Quartet which Odin Rathnam and Michael Sheppard will be playing with the Fry Street

for Sunday's 4pm concert at the Glen Allen Mill with an "up-close/personal" post about the Schubert Trout Quintet which Stuart Malina will play with members of the quartet and bassist Donovan Stokes including some great video clips of a legendary performance by Daniel Barenboim, Itzhak Perlman, Pinchas Zukerman, Jacqueline du Pré and Zubin Mehta

I know I should really do one on the three Beethoven Quartets the Fry Street will be performing, too -- Op.18/5 on Wednesday, Op.18/4 on Saturday and Op.18/2 on Sunday -- but I figure Beethoven probably needs less introduction or doesn't have as many interesting back-stories as the Chausson, Shostakovich or the Trout Quintet have.

Plus, I need to get back to the song cycle: I was able to finish the piano part of the 2nd song, "The Lazy Poet," which took exactly a month in itself. Other things in my schedule have precluded concentrating on the vocal part, now, but at least I was able to sit down and figure out enough of it to think - knocking on plastic laminated artificial wood-substitute - that it should go fairly quickly. And there are other things to mention - the books I've been reading and the complete restructuring of my diet which has resulted in at least some weight loss - but I'll save those for later.

Time to go listen to some music - most recently, I've been immersing myself in the Ligeti Etudes, but more on that, later, too.