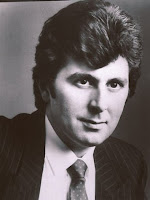 It’s been two years, now, since the music world was dealing with the news of the deaths of three great singers: Beverly Sills died on July 2nd, Regine Crespin on July 7th, and then on July 10th we were waiting for news about tenor Jerry Hadley who had been placed on life-support following an attempted suicide, then waiting for the inevitable news of his death which finally came 8 days later..

Jerry Hadley had been one of the leading American tenors in the ‘80s and ‘90s. Then his career (and life) fell on hard times, as often happens to singers who, usually, reach a point where they are considered “past their prime.”

I had blogged about it when I worked at the radio station, but those posts are no longer available. There were numerous e-mails from people who knew him and people who just loved his singing. An e-mail today from a friend and colleague of his, Robert Chapman, who had contacted me then, prompted me to remember the events of those days.

After hearing the news about Jerry’s being on life-support, Mr. Chapman wrote to tell me about his experience working with Jerry when his career was getting underway. He allowed me to quote him then and I re-post that quote now:

- - - - -
This afternoon, I was listening to Jerry's recording of 'A Tazza 'e Cafè! (from his RCA recording A Song of Naples). This happy song, lovingly sung by a grandson of Italian immigrants, is how I choose to remember our mutual friend.

When I first met Jerry, he wanted to pick my brain about what it was like to sing in European opera houses (I'd spent several years at the Frankfurt Opera). I asked him which tenors he most admired and might want to pattern his career after. Without any hesitation, he replied "Fritz Wunderlich." "An excellent choice," I said, of the great German tenor whose life was tragically cut short at 36. Over the years it became more and more apparent that the singer whose career most closely paralleled Jerry's was not Wunderlich's but Nicolai Gedda's. For the most part, each chose their roles wisely, although both Jerry and Nicky eventually succumbed to the temptation to take on roles that Mother Nature never intended them to sing. Both were very smart but, after all, they were TENORS!
- - - - -

Bob, who’s since been working for a non-affiliated classical music station in North Carolina, wrote to tell me, “I've stayed in touch with [Jerry’s] former wife, Cheryll, and she's given her imprimatur to the two shows I'll be running, this week and next, on the WCPE Opera House in tribute to Jerry.” He included this information which you can listen to on-line.

- - - - -
On this week's WCPE Opera House, tenor Jerry Hadley stars in two of the four operettas by Franz Lehár that he translated and recorded with maestro Richard Bonynge: The Czarevitch and Giuditta. The plot of The Czarevitch is loosely based on a true story: the self-imposed exile of the son of Peter the Great, Alexei, who shirked his father's command by running away to Naples with his Finnish mistress disguised as a page. In the operetta, the mistress is replaced by a ballerina, Sonia, who is initially disguised as a boy! Giuditta was Lehár's last and most ambitious work. Of all his works it is the one that most approaches true opera, the resemblances between the story and that of Bizet's Carmen and its unhappy ending heightening the resonances. Perhaps the best known song in the work is the soprano aria "Meine Lippen, sie küssen so heiß" ("Kiss my lips and your heart is aflame"), sung by Giuditta in the fourth scene.

Next week we'll conclude this Lehár festival and tribute to the late Jerry Hadley with performances of Paganini and The Land of Smiles. Not surprisingly, the former has some extraordinary fiddling, and the latter contains perhaps the most famous operetta aria every written, "Dein ist mein ganzes Herz" ("Yours is my heart alone").

The WCPE Opera House is heard every Thursday evening at 7 o'clock in the Eastern time zone on 89.7 FM in central North Carolina, and we're streamed online at http://www.theclassicalstation.org