Once past the groundhog, then past the Vernal Equinox and finally by the time I begin to feel like it’s actually Spring, once the forsythia are in bloom and I can tell whether some of the plants in my garden will make it back for another year, I think of all the “Spring Music” that easily comes to mind and that, for 18 years, I had programmed abundantly through the hope of March and the showers of April – from symphonies by Schumann or Britten to songs by Schubert or (without words) by Mendelssohn – and one work stands out for me: Igor Stravinsky’s ballet, Le sacre du printemps or, as we know it in English, The Rite of Spring. 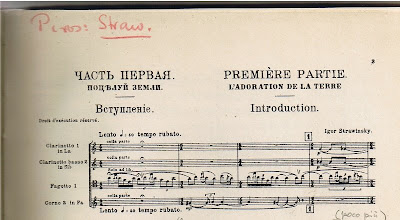 From the original Russian, the title (not pictured above, btw) translates more accurately as “Sacred Spring” but somehow the idea of ritual became part of the title and it has become part of my spring ritual, as well.

My first encounter with this music, one of the most significant works for the 20th Century, was in a cartoon. Walt Disney’s Fantasia, to be exact. I don’t remember when I first saw it – probably when I was in 2nd Grade, about 7 or 8 years old. Classical Music was not new to me: I had heard Bach’s Toccata & Fugue in D Minor or Beethoven’s Pastoral Symphony before, somehow, but I had never SEEN them before. I remember my mother thinking the Night on Bald Mountain was simply too scary for a child my age but the thing I remember most about the movie was the dinosaurs.

A couple of years later, after my folks gave me a collection of 12 LPs called “Music of the World’s Greatest Composers” which included The Rite of Spring, I could only listen to it thinking of dinosaurs. Otherwise, the music didn’t make sense, not like Beethoven’s Eroica or even Wagner’s Prelude & Liebestod from Tristan und Isolde which were also included in this collection. Eventually I realized what Disney did to the music – going back to the opening at the very end and all that – had nothing to do with Stravinsky’s original story, that of a young girl (what did a 9-year-old know of virgins?) who

dances herself to death as a sacrifice to the God of Spring. Funny, but the violence of the fighting dinosaurs was okay, but the human drama would have been too much, no doubt. Given the beauty of Disney’s animation even then, I wonder what an actual setting of the Sacrificial Dance would have looked like?

As often as I heard the music, through recordings or concert performances, I actually never SAW the ballet danced till I was 27. I was teaching in Connecticut and a bunch of friends and I decided we just had to go to the Metropolitan Opera in June of 1976 to see the production by the American Ballet Theater. It was choreographed by Glen Tetley and though it was fairly abstract, it still essentially followed the essence of Stravinsky’s plot. The opening of Part Two, the night scene, was a long (and brightly lit) pas de deux with Martine van Hamel and Clark Tippet that was far more beautiful than anything I had ever imagined with this eerie music. The other thing that was rather surprising: the Chosen One, the virgin who dances herself to death, was a man.

I have no idea how you prove he’s a virgin. We were sitting in a balcony box near the front of the stage, looking down on the dancers. After the Chosen One was writhing on the ground and then ran across the stage to throw himself down a few seconds later over there, you could see the complete outline of his body marked in sweat on the floor.

As the wild rhythms of the Sacrificial Dance grew to a goose-bump inducing, eye-widening frenzy, the other dancers pounced on the Chosen One as if they were going to tear him limb from limb. Four men hoist his now limp body above the crowd - there is that amazing silence - and then, on the last crashing chord, he flew up above the stage, what seemed to be higher than our 2nd balcony seats, his arms spread wide like a crucifix, frozen into a pin-spot followed a second later by a black-out.

I was so startled by this, I almost fell over the balcony railing into the pit below. To be very honest, nothing has ever given me that same visceral response in a live performance. Even the best concert performances pale – ho hum – by comparison.

Two more times that summer, I drove down from Storrs to New York to see that production. The information I can find on-line mentions Baryshnikov danced the opening night, but in all three performances, I never saw him dance the role (he had only defected to the west two years earlier and was quite the rage, then). The name I remember is Charles Ward.

After moving into New York, I saw two more productions of the ballet. One, for some reason, I can’t recall. The other was by a touring company from Germany with a famous dancer/ choreographer whose name I cannot remember, either, but this production was clearly from his Alley Oop period, as a dancer friend of mine described it. Instead of an abstract setting with leotards or body stockings, this was more realistic, taking Stravinsky’s original scenario very much to heart. To a point.

In this case, the Chosen One is danced to death by the High Priest (the famous dancer/ choreographer) who is dressed in a shaggy bear-skin over-the-shoulder affair that would have annoyed the politically correct Geico cave-men no end. At the very end, standing on a rock (was it in front of a cave?) high above the wildly gyrating crowd, the High Priest throws the girl up in the air, she lands straddling his shoulders, spinning around as he turns his back to us (this, during that momentary silence) so that, on the final chord, she suddenly falls backwards, as if hanging with her feet around his neck, arms splayed and the whites of her eyes visible from the second tier of seats!

The only thing I remember about the third one – a literal telling of the story but not so realistically staged or costumed – ends with four long-bearded sages each carrying a long staff who close in on the Chosen One during her final dance, getting imperceptibly nearer to her as she becomes increasingly more terrified. By the end, they have her confined in a narrow space between them, almost hiding her from the audience. At the end, the four sages raise these staffs on the flutes’ up-beat, poised over the dancer in that frozen silence, then on the final chord bring them crashing down as the lights black out, a brutal sacrifice in the old sense of the word.

The sheer physical athleticism required by the music may well make up for any shortcomings in the choreography in general. Bejart’s famous 1970 production (which I did not see) seems to start among germinating rodents before turning into the Sex Olympics. Pina Bausch’s version (I found only the final scene on-line) appears to take place at a singles bar where the dancers in the background seem totally uninvolved as the Chosen One who seems more like the Rejected One convulses before finally keeling over (if Janet Jackson’s wardrobe malfunction disturbed you, you may want to skip this one).

But Nijinsky’s original choreography (more the cause of the riot at its 1913 premiere rather than Stravinsky’s music) has been reconstructed by the Joffrey Ballet. I recently found it complete at YouTube (of course), dividing (badly) the two parts of the ballet into three segments. But it will give you an idea of the power of the ballet. Keep in mind how this must have looked in Paris in 1913 – when people had never seen anything like Martha Graham or Modern Dance or gratuitously overdone psychological symbolism and people must have been wondering what happened to the tutus and all those graceful pliés and leg extensions. Ignore the fact many of the costumes make them look like Dilbert’s Elbonians.

Spring in Russia arrives with a violence unknown in other climates as the frozen soil suddenly erupts with a great upheaval and cracking of the ice. This, I think, is actually described near the end of Part One – in the middle of the second screen, below – after the Ancient Sage kisses the earth and the music erupts into a frenzy of upward motions.

What surprises me most about this choreography is how well it suits the music, more than just physical actions set to very physical music. There is a great deal of stamping as if the dancers feet become another percussive extension of the orchestra, as well as hand-clapping and even thigh-slapping: the dancers are not only seen but heard. In the final dance, the Chosen One may be limited to a series of repetitive gestures in a very small physical space stage center – and it is not easy to stand still so long in that tense position before her dance even begins – that emphasizes her supplication to the gods, her life in return for a good crop, but also her personal fear of death in such a bargain.

Yes. Horses. This is a performance with dancers and horses and very often dancers ON horses, filmed in 2002 in an arena with L’Orchestre de Paris conducted by Pierre Boulez. The dancers are members of Zingaro, the choreographer goes by the name of Bartabas (you can read more about him, here). Of course there is also the practical concern, thinking what dancer wants to be rolling around on a dirt floor when horses, cantering about, answer Nature’s call, but leave those thoughts aside. The horses make their entrance about four minutes into the ballet. The pure white horses during the night scene that opens Part Two are themselves the dancers. Then in the final dance, watch the build-up as the Chosen One is selected.
- - - - - - -

After that, there is nothing more to say.