Caught Between Seasons, Between Works

It is that time of year when I look forward to leaving Winter behind and welcome warmer weather, though it may take a while before Spring finally asserts itself enough to make me feel totally comfortable with the change of season. Flowers help. 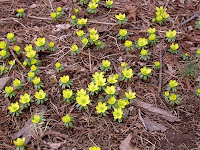 There was a patch of “aconites,” tiny wild-flowers growing near the edge of the yard that had begun blooming even in late March, delicate green leaves with buttery-gold flowers. So I transplanted some of them to my little garden spot off the back porch where I could see them better, where they were quickly eaten by the deer. But at least it was a sign of spring-to-come, and that was enough to make me feel better about things.

This year, it is also a time when I find myself “between works,” an awkward state I haven’t experienced often over the past couple of decades, after having finished one composition but not yet started on the next one or made the decision just yet what it should be. In addition to blogging about the Guarneri Quartet for Market Square Concerts, I have been trying to get my thoughts organized to get back to some creative work.

The Violin Sonata is not only completed but copied, finally – the old-fashioned way – mailed off and now officially received. Since it started life as a single piece for John Clare and I to play before growing proportionally into a few more, dedicating the whole thing to him out of friendship for having brought it into being seemed natural. I mailed it off on Wednesday in time for him to receive it on his birthday Saturday! Having turned 39 – now entering the Jack Benny Decades, complete with the urge to play Kreutzer’s 2nd Etude and “Love in Bloom” – John now looks ahead to another project ofr his next birthday: a recital of violin and piano pieces written especially for him by composer-friends. Though we’d played the first piece almost 3½ years ago, I was still concerned I might not finish mine in time for his 40th... Whew...

But whereto next? Having finished the Sonata on February 28th, I wanted to focus on copying it before I got distracted by something else – the full score for the songs, “Evidence of Things Not Seen,” has yet to be completed – but in the past few weeks, the itch to write started manifesting itself in stray thoughts while I’m trying to focus on copying. Afraid to say “Go away, I’m busy,” because there was a time (many years’ worth) such thoughts never came, I started dutifully trying to figure out where things would go.

Having heard some of Lee Hoiby’s beautiful songs and thinking of them as models of simplicity and directness as well as extremely well-written piano parts – all aspects my music lacks – I thought it might be time to go back to write some songs with piano. I don’t think I’ve done this since I was in college: any vocal music since 1971 had been with chamber groups or orchestra.

Usually, I dislike reading poetry not for any dislike of the art but because it usually means I want to set them to music and that usually means a whole series of legal hoops to get (and usually pay for) permission to do so. The one time I asked a poet for permission, back in the late-70s – Richard Thomas, the actor and also a very fine poet – he offered to write some new poems specifically for me that I could set before they would be published, thus avoiding that particular hurdle: this coincided with a sea-change of a style change for me, along with other major events undermining my life at the time, and instead of songs with piano, they became songs with guitar (which I’d never written for before) and turned out to be among the worst things I’d ever written in my life. And so they, along with that and other similar projects, were set aside.

But what texts, if I’m looking for something in Public Domain? My musical affinities do not normally attract me toward 19th Century poets – and then, even if I chose earlier poets like Michelangelo or Petrarch, I would have to deal with paying rights to use English translations. When I was at Eastman, I even learned enough about Chinese to be able to translate some of Li Po’s poetry myself rather than rely on published translations, all still under copyright. These became my Seven Songs from the Middle Kingdom for soprano, mezzo-soprano and chamber ensemble which I conducted at Eastman in 1973, my studently answer to George Crumb’s Ancient Voices of Children.

But once I started reading some possible sources – getting out my grandfather’s 1905-ish copy of Shakespeare’s Sonnets, for one – I started thinking “if you want to work on your piano-writing skills, why not just write piano pieces?”

Off and on, I had seriously considered writing a collection of short pieces for solo piano. It would make sense, maybe even something I could play myself, since I have nothing to show when people ask me to “sit down and play something,” the typical “roll over/sit up” response many people have when composers admit to being composers. These would be short, like etudes but setting up creative challenges for the composer, not the player (unless that player is me, in which case, yes, anything is a technical challenge).

So as soon as I started jotting down some ideas, what started coming to mind was – a piano quintet...

Now, there is no reason for me to write something for piano and string quartet. If I write piano pieces or songs, there are ample opportunities for performance, thousands of models no one may think about when hearing them, but when someone hears I’m writing a piano quintet, suddenly there are a small handful of works – like Brahms, Schumann, Dvořák and Shostakovich, much less Schnittke or Adès – to be compared to, to be accused of trying to replace, to fight for space on a program.

While listening to the Harrisburg Symphony rehearse Shostakovich’s 9th Symphony or the Guarneri Quartet play Kodály, I found myself jotting down ideas for a piano quintet. There are 35 different possible combinations for these five instruments that I can use in the course of the structure. How can I make that structure work? I’m not writing down notes, yet – I’m writing down shapes, forms, details, framework. Once any of those make sense, bam! I’m sunk...

So far, the Piano Quintet is winning...
Posted by Dick Strawser at 11:33 AM