First Snow: Not Ready to Go All Piblokto on You Just Yet 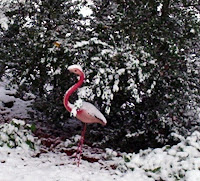 Every winter, at the first snow, I remember my mother telling me how her father always told her “the date of the first measurable snowfall is the number of major snows you’ll have during that winter.” He was an engineer: he was very precise.

It doesn’t sound like a terribly scientific argument, especially considering both my mother and my grandfather were inveterate list-makers. Any lists of snowfalls during a given winter might rarely rack up to the date of the first snow. At least, in my experience. 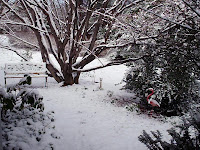 One year (sometime between 2001 and 2006), the first snow – not the first siting of snow flurries, but the first snowfall you could actually go out and measure – was on December 3rd. We had something like ten snowfalls before the month was over, nothing really serious but all measurable. Another year, the first snowfall wasn’t until the week after Christmas but we only had three or four snowfalls the rest of the season, one or two of those being over a foot.

So this morning we had between a half-inch to an inch of snow across Central Pennsylvania, probably enough to snarl traffic, make people wonder if school would be delayed some, and think maybe they should’ve rushed out to stockpile bread and milk after they heard the forecast last night.

I never understood this Bread-and-Milk phenomenon. One night, I had to go to the store anyway and stopped on may home from work. It was after 1:00am and the store was as busy as it would normally be at 8:00pm. There was a woman with one of the large carts full of bottled water, egg cartons, several gallon jugs of milk and maybe a half-dozen loaves of bread. Maybe she was having a French Toast Block Party. And we were only supposed to get 6-8" of snow!

A chat acquaintance (not a friend, just a chattance) grew up in upstate New York (generally meaning anything north of the Bronx) but waaaaay north along the end of Lake Ontario and the Canadian Border. He said a foot of snow there is called a dusting. 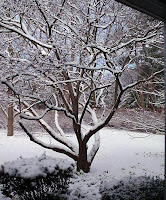 When I woke up around 5:15 this morning and looked out, I wrote down on the calendar “1st Snow” and will probably keep track, if I remember and don’t get bored with it, of each measurable snowfall from now until the arrival of Spring. Will there be 20 more snows? How many of them, like this one, may be gone before noontime?

That word in my title, by the way – piblokto – is an Inuit word which means a kind of hysteria that might include “uncontrolled wild behavior,” screaming, depression, senseless repetition of overheard words and running around naked in the snow but which may not necessarily be an overreaction to the ubiquitousness of snow itself.

Tuesday night was the coldest it’s been here since last winter which was more of a shock having had temperatures in the 70s last week. It was 25° on my porch when I woke up around 5am Wednesday morning to discover that in fact my house was about double that. 55° is a tad chilly for a household temperature and I wasn’t sure, given the new Geothermal Technology that was installed in the house in August, whether the problem was the technology or something mechanical. Several people (who don’t have geothermal systems) warned me that when it got really cold out, these heat-transfer pumps can’t keep the house as warm as an old-fashioned, dinosaur-devouring furnace. But that’s a heat-pump that takes it heat from the outside air which seems a rather foolish thing to do in wintertime, considering if it’s 25° outside, there’s not much heat to transfer into the house. “Back up” or “auxiliary” heating would be more expensive and less effective. But then, my heat-transfer pump is taking its source from the pipes of water that circulate through the two 250' deep wells in my front yard where the dirt, once you get four feet below the surface, is a uniform 55° all year ‘round. Ah – did I say 55°? Does that mean on really cold days when my heat-pump fails, that’s all I can muster is 55freakin’°???

Groff’s Heating & Plumbing who’d installed the system for me called me back by 7:30am and had a guy on his way in minutes. It’s an hour’s drive from their place to mine. I had already figured out how to activate the “Emergency Heat” and in three hours got the house all the way up to 59° by the time he got here at 8:30. There was no easy explanation for what happened. It certainly wasn’t the technology nor did there seem to be anything wrong mechanically. There were no “error faults” in the system’s memory and somehow the thermostat had shut off and defaulted to a pre-programmed setting that dropped the thermostat down after 8am to 62° (huh??) and then kicked it back on at 5pm to 72°. I remembered changing that the first day it was running: I didn’t think it necessary to cool my house off in August down to 62°... So, something strange happened which the technician was kindly trying not to blame on me hitting the wrong sequence of three or four consecutive buttons accidentally and which I was trying not to blame on the cats jumping five feet up the wall and doing the same thing on purpose... Anyway, within a few hours, all was toasty warm in the Land of Dr. Dick, thus staving off the first attack of piblokto-ness of the season. 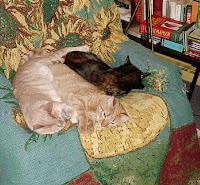 Meanwhile, I have to get back to work on the novel. Passing the 83% mark toward the goal, I managed 2,425 words this morning by 8:30, then took a break to write 942 more before continuing with the next “writing assignment.” The cats have already tired of watching the snow – especially now that the sun is out and most of it has already melted down a good bit – with three of them stretching out on the chair behind me, covered with an old sunflower afghan.

Photos: My yard this morning - Floyd the Flamingo, not generally considered a snow bird, who is ready to come inside for the winter; the garden bench under the Japanese Maple; the dogwood outside my back door. Inside, Freddy, Abel and Blanche share the Sunflower Chair.
Posted by Dick Strawser at 12:09 PM