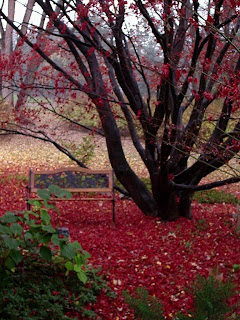 This was the view in my back-yard today.

November is not a favorite month of mine though it’s not on the bottom of the pile, either. Cold rainy days in November, though, generally leave me, well... cold, usually from the inside out. It’s the kind of day I would like to snuggle up in a comfy chair with a good book and some cats (if the cats would allow me to read: usually the book is in the way of where they want to nestle) if I had the time for that. Oddly enough, now that I do have the time for that, finding myself one of the highest influx of unemployed Americans in the past seven years, I don’t have the time for that today.

Tonight there’s a performance by Concertante at the Rose Lehrman Arts Center at Harrisburg Area Community College that begins at 8:00. They’re playing two movements of the String Quintet in D Minor by Alexander von Zemlinsky, the Piano Quartet of Robert Schumann and Ernő Dohnányi’s first published work, his Piano Quintet in C Minor, one of the few “other” piano quintets available beyond the standard handful of Schumann, Brahms, Dvořák, Shostakovich, maybe Fauré and Franck... who’m I leaving out? Those are the basic ones you might hear (often enough) when a pianist joins a string quartet for an evening of chamber music.

I’ll be doing the pre-concert talk beginning at 7:15, gathering in the “Black Box” theater down the hall to the left of the auditorium’s entrance.

My starting point for the talk is one thing they all have in common: they’re all, at one time or another, better known for their relationship to someone else. And I discovered, thinking more about it, another common denominator, a composer not on the program (at least on this one) but whom I’ve already mentioned.

Schumann, in his day, was better known as a writer about music than a writer OF music. And his wife happened to be one of the greatest concert pianists of the age, Clara Schumann. In fact, though she would perform his music on her concerts, he often felt like a lap dog trotting after her when he went on tour, a consort who was treated by the press and the public like Mr. Clara Schumann.

Zemlinsky, almost forgotten today, is best known as the mentor of Arnold Schoenberg and, as it turned out, his brother-in-law. Zemlinsky also worked with Gustav Mahler in the early years of the 20th Century, championing new music (some of it his own, some of it by his brother-in-law) as well as conducting and teaching. One of his students, by the way, was a woman named Alma Schindler who would shortly become Mrs. Gustav Mahler.

Ernő Dohnányi – or to use his more frequently seen German-form, Ernst von Dohnanyi – is the third of three major Hungarian composers anyone talks about in the founding of the 20th Century Hungarian Style, with Bartók, Kodály and... uhm... oh yeah, Dohnányi. He’s the one most people haven’t heard anything by, or if they have, it’s that treacly cute set of variations on “Twinkle, Twinkle, Little Star” for piano and orchestra, written in various and sundry styles, a delightful pastiche that has little to do with his real worth. These days, since even that has faded from the concert halls and probably the air-waves, he’s remembered more as the grandfather of the former conductor of the Cleveland Orchestra, Christoph von Dohnányi.

Interestingly enough, the music we’ll hear by Zemlinsky was composed the year he formed an amateur orchestra of which the sole cellist was a young man who also wanted to write music, named Arnold Schoenberg. Dohnányi’s quintet was composed a decade before Bartók had begun collecting the Hungarian folk songs that became the foundation of the modern Hungarian “school.”

The other “common denominator” is Johannes Brahms who was a protege of Schumann’s and a mentor of sorts to both Zemlinsky and Dohnányi! Zemlinsky had joined one of the major music organizations in Vienna in 1893 when Brahms, who turned 60 that year, was the leading figure in the city’s musical universe. Several of Zemlinsky’s early chamber works were performed in their concerts and he got some very complimentary comments from Brahms whose endorsement certainly helped his career. Zemlinsky had turned young Schoenberg on to Brahms’ music which would be a major influence on the development of his style, even beyond tonality, but it was Wagner that would become the biggest immediate factor in pushing Schoenberg into the 20th Century.

Brahms had heard about the young Hungarian pianist and composer Dohnányi and decided to arrange to have his Piano Quintet premiered in Vienna, an endorsement that also led to its publication. As Dvořák's music was full of the sound of Bohemian folk music, Dohnányi's music brought to cosmopolitan Vienna the unexpected sounds of actual Hungarian folk music, not the urban popular music of the Gypsies that everybody always associated with Hungarian music, most notably in those popular dances that made Brahms’ fortune.

Just as Schumann’s passing the mantle on to Brahms had far reaching consequences, Brahms own mentorship may have been more profound on someone like Dvořák, though time, temperament and perhaps talent may be more at fault for the failure of Zemlinsky and Dohnányi to benefit comparably. As styles changed around 1900 and Schoenberg went off in one direction, Zemlinsky was not comfortable in following this infusion of air from another planet (to quote a line from the poem Schoenberg set in his 2nd String Quartet, one of the first “official” atonal pieces). Zemlinsky’s career was further hampered by both world wars as was Dohnányi’s: both composers, like Bartok, found themselves ex-patriots living and dying in the United States.

Dohnányi spent much of his time rebuilding the musical life of Hungary during its independence following World War I and the collapse of the Austrian Empire (or, as it was mollifyingly known as the Austro-Hungarian Empire, the Kingdom of Hungary still ruled by the Emperor of Austria), and before the government was taken over by Nazi Germany before World War II. Much of his creative energy was sapped by the government administrative posts, the concertizing and above all the teaching. He was often taken to task by his more ethnically-minded colleagues Bartók and Kodály for being too conservative in his musical style.

But it is easy to forget that, when he attended the Conservatory in Budapest, he was the first ethnic Hungarian student to graduate from there as a “star.” It is also important to note that Vienna, for all its Imperial cosmopolitan-ness was still xenophobic enough to consider a composer like Dvořák from the province of Bohemia and the Hungarian Dohnányi were, essentially, “hicks,” inferior to the good Germanic culture that was Viennese Art, even though the most famous Viennese composers (Mozart, Haydn, Beethoven, Brahms and now Mahler) were all transplants (from Salzburg, from rural Austria, from Bonn, from Hamburg; and Mahler was a Jew from Bohemia). In fact, three composers who were actually born and raised in Vienna – Schubert, Zemlinsky and Schoenberg – received barely any recognition from their home town! So much for prophets in their own land...

Meanwhile, I’m hard at work – though today, hardly working – on the November Novel Challenge that is NaNoWriMo (November is National Writing Month). The goal is not so much to hurry up and write a novel during the month of November, the goal is to push yourself to write 50,000 words whether or not the novel is completed in time, so you have something to go back and edit, pare down or add to or even finish at a later date. Without goading yourself toward this goal, you might never sit down and actually write 50,000 words. I can vouch for that: twice I’ve tried getting this novel started and twice it got put aside for other things (called “reality”). So far, just about half-way through the month, I am half-way toward that goal with 25,012 words under my belt as of yesterday afternoon. 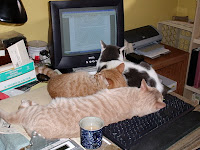 So here, on this drizzly dreary November afternoon, rather than curl up in a chair with the cats and read a book, I am trying to hunker down at my desk and write a book, though the cats are still trying to claim their share of the turf: everybody needs a muse or a proof-reader or an editor, right? (see Freddy, Charlie and Max, my support group, right).

And now, back to work.