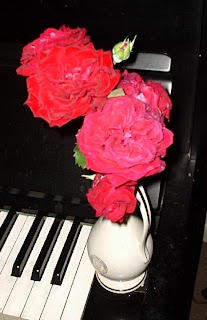 It sounds odd, calling them “Dad’s Roses,” considering my father had little to no interest in the yard and probably hated mowing the grass almost as much as I did when I was a kid. It was my maternal grandmother who grew roses – one, I remember especially, climbing over a trellis, a beautiful Peace Rose.

These roses, though, came from a bush N’s mother planted 23 years ago, taking a cut rose from the casket spray when my father was buried in July, 1985. Never mind that the rose sat forgotten on the back seat of the car for most of a broiling summer day after the funeral, but given her over-achieving green thumb, she stuck it in the ground anyway and put a jar over it. The next year, there were three blossoms on it on the first anniversary of Dad’s death. The bush has never done really well, and sometimes the deer, chomping their way through the back yard, managed to eat all the buds.

This year, however, there were three blossoms and two buds which barely survived a pretty nasty rainstorm last week.

I was thinking of taking them over to the cemetery but thought I’d like to enjoy them here. I’m not a great believer in graveside visits, anyway – they’re not really there: they’re wherever I am, in my heart, and certainly here, all over this house.

So for the past week, the roses have been kept in the only safe, cat-proof place I have – the refrigerator. They were a little past their prime even when they arrived, but that’s not what counts, for me. Having them is another memory, a connection with the past.

When they fall apart and the petals have dropped, I will dry them, then place them in a bowl, scattering some of them over the grave.

N’s mother died four years ago this month herself, so she wasn’t here to rescue a rose from my mother’s casket spray. I think we tried ourselves, but none of them made it. The one connection like that I have with my mom is the red peony by the back door, grown from a stalk she’d gotten from her folks when they moved into their first house in 1946, divisions from the plants my mother grew up with in the backyard of what was her mother’s first house. That means they were planted probably around 1919 or so. This year, barely hanging in there, the peony didn’t produce a single bud: maybe next year when the original plant might be celebrating its 90th birthday.
Posted by Dick Strawser at 12:51 PM