It has not been the best weekend, kitty-wise, though they are, today, six months old! Perhaps I should have a party for them but as I get closer to finding homes for three of them, I feel a mixture of pending relief that things might be more manageable in the nearer future but also that sadness knowing I will miss them even when I won’t miss the cyclone of energy all five of them can at times create. 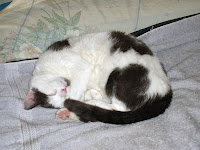 It was Max’s turn to go to the vets this time: his eyes were again running and now he had started sniffling and sneezing, the equivalent of a cat cold. He’d had something like this when I first brought him in almost six years ago when he was probably seven or eight months old. In fact, his eyes were so watery, the goop draining from his eyes looking like bad mascara, one of his name options at first had been Tammy-Faye before I realized this was a male cat.

So now I am to give him eye-drops 3x/Day and two different pills 2x/Day each. He was not keen on this regimen when he was confined to my apartment’s bathroom, pending his release among my other cats (which then included a 12-year-old diabetic cat and an 18-or-19-year-old cat I had inherited from my neighbors after they had both passed away). And now he is nearly twice the size and weight he was then, making the wrestling match not as well balanced as it had been. He was now a seasoned six-year-old with an attitude that could easily defy a mere middle-aged human.

It took me nearly two hours to get the first pill in him on Saturday. The one, just a half-pill, kept falling out of the “pill-popper” I need because, being only one person, it is otherwise impossible to hold him still, pry the mouth open and insert the pill all the while retaining the normal set of appendages I had been born with. He has also become an expert squirmer: coiling him with copper wire and placing a magnet beside him, pilling him could become an alternate energy source for my house. Clenched tightly in the equivalent of a full nelson between my knees, he can still turn his head from side to side with such speed, I managed to get the half-pill in his right ear which he then shook out onto the floor. After placing that back up on the desk, I decided perhaps the capsule would be easier. But it became too exhausting, so I would sit back and wait, taking ten minute breaks hoping that perhaps he would finally give in to the inevitable. While I was resting, he was storing up more energy and probably could have kept this up all day. Finally, somehow, I managed to get one capsule down his throat. He went and sat in the corner to preen himself for the rest of the morning, hoping to restore his image before the other cats.

After a busy day, I was too bushed to wrestle him for the evening’s pilling so I chose to wait till morning. At 9:30, I succeeded with the eye-drops. By 10:15, I had managed to stop the flow of blood.

He had chomped down hard on the tip of my left index finger and though I do not, normally, play the piano with any regularity to warrant dreams of being a pianist per se, I still like the idea of keeping my finger. It took a good 15 minutes to staunch the wound, leaving me with a sink full of blood spatterings and a mound of cotton balls damp with hydrogen peroxide. Fortunately, when I’d brought in Frieda, the feral cat and mother of the kittens-to-be, I had stopped on the way home to replenish the first aid kit, considering she had given me two healthy bites in the process of catching her (practically the last time I was able to touch her).

And of course I lost my temper. So now I and the cat are both traumatized at the idea of a twice-daily pilling.

Oh, and when I placed the errant half-pill on my desk after the first attempt at pilling? I opened the door to the room where all this was happening to find all five kittens waiting curiously for the outcome, wondering if, like their bout with the diarrhea medication they’d been subjected to a couple of weeks earlier, they were now going to be next. When I failed to come after any of them, they resumed their normal kittenish curiosities which, in Charlie’s case, involved checking out my desk. Before I could grab the half-pill to put it away, he had sniffed at it and swallowed it down! Just like that!

Posted by Dick Strawser at 1:02 PM