Kitten Pictures I Have Missed...

When they were born, I began taking pictures of the kittens every day. As they got older and reached a plateau where they appear to have stopped growing, I have practically stopped taking pictures, though they tend to stand still less for the ritual than they had even three months ago when they realized these legs were meant for flying.

And as I’ve said, my camera is slow on the re-set with a three-second delay between pushing the button and activating the flash that can be a C-Change for a Grade-B Camera with its AA-Batteries. Since I do not have it slung on my hip the way some people carry their cell-phones and key-chains, I usually find myself and the photographic subject in a room distant from the location of the camera. By the time I would retrieve it, the cats have moved on to some other pose not nearly as interesting. 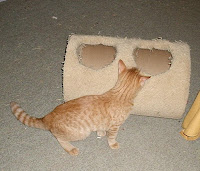 The other day, I was in the master bedroom which for the first several months of their lives had been theirs, when I heard a thump behind me. Turning to see what they’d gotten into, now, it turns out they had “up-dumped” the little two-hole cat condo on its side. Blanche was peering out of the one hole wondering how that could possibly have happened when one of the four blondes hopped into the other hole and quickly assumed the same position. They were now, apparently, waiting for the other cats to come and roll the condo around as they do on occasion. I had seen them do this, as I stood cameraless in the doorway, with Blanche inside. In a flash it had been over and she sauntered out a bit dazed but looking like “let’s do that again.” Of course they never did. Nor did they this time, either. Before I could even move much less retrieve the camera, they had hopped out and the condo was now empty.

A few nights ago, sitting at my computer, I happened to turn around to catch Charlie peering out from under the chair by my bed. As most of my chairs are covered with old throws and blankets in an attempt at protecting what is left of their upholstery, the space beneath this particular chair becomes a much sought-after cave, draped off from the rest of the world by a maroon blanket and a wheat-colored chenille throw with fringed tassels on the ends. There sat Charlie, between the two throws, looking up at me, his head between the tassels, a few knots hanging loosely over his forehead and others draped around his shoulders like a wig gone askew that reminded me of Janis Joplin if she had been a blonde. My camera was only two feet away but of course the move to reach for it became a new curiosity and before I could touch the camera, Charlie was on the desk checking it out, his wig hanging limply off the chair like, well... like an old throw with tassels on the end.

Walking into the kitchen the other morning, pre-coffee, I had this eerie feeling I was being watched. Turning to get something out of the refrigerator, there on the top were Abel and Guy, their chins both resting over the edge, peering down at me. Then Guy looked up toward the ceiling which reminded me of the famous painting of the two presumably innocent cherubs. Blanche sometimes also likes to perch on top of the fridge, leering over the edge like Snoopy’s impression of a vulture.

There are times I simply do not want to imagine what is going through their minds.