How Many Kittens Can Dance on the Top of a Desk? Someone who once raised a kitten told me they could not imagine what it would be like dealing with “five times the energy of one kitten.” It’s not really 1 kitten’s energy x 5... it’s more like 1 kitten’s energy to the 5th power...

At times, it’s like living with the Flying Wallendas when they get into their “gymkhana” mode. A few weeks ago, they discovered if you land just right on the seat of the rocker-recliner and leap up onto the back at just the right moment, clinging for dear life, and then the next kitten jumps up on the seat which sets the rocking into even more violent motion, it can fling the top kitten off well across the middle of the living room. Style, of course, is everything, with paws outstretched much like a flying squirrel, sort of like this:

Three or four of the kittens tried this in fairly quick relay, one making a rather messy landing like a kid doing a cannonball though most of them sailed through the air with great and obvious delight. Fortunately the Catapult Event was not one they have tried perfecting, at least while I’ve been home.

Unfortunately, last week all five of the kittens were having bowel issues. I’ll spare you the comparisons to cheap mustard, but it was necessary to get this straightened out. It didn’t seem to affect their energy or appetite but it did make the rounds of cleaning the litter box not only more of a challenge but clearly more urgent. The vet said, since they all have it, just bring one of them in for a diagnosis.

And so, Abel took one for the team.

At least, I think it was Abel. Both he and Baker have been becoming a little more alike in coloration. Before, if they were side by side, Abel was the yellower of the two, Baker more reddish. Now, even in the best light, it’s impossible to tell for sure.

So now, part of the routine, if I can catch them when they’re in that relatively rare state of dormancy, I have to give all five kittens 1.5cc of liquid medication that is like a runny vanilla pudding and smells kind of sweet. Whether that makes them like it or not, I don’t know, but they all have varying reactions to it.

Charlie is the easiest: he may actually like it. Blanche is the biggest challenge and she normally manages to spit up a good deal of it – the first time, all over her, all over me, some on the rug, on the side of the piano and, somehow, on a picture a few feet above us. Guy usually develops a stiffness in his hind-legs which makes it difficult to get him into the requisite half-nelson crouch: he’s sort of like greased lightening without the grease or the pig. When I do Abel and Baker, I catch one then shut him in the bathroom till I’ve done the other one, to make sure I don’t give one of them two doses and the other one gets skipped...

The first time, it took about 35 minutes to juice up all five. This morning, it took about 15, so we’re making progress. And someone is doing much better, checking the litter boxes: at this stage of my life, one out of five isn’t so bad...

And then, for about 20 minutes, it’s like I’ve just given them a can of Jolt. This is the point of the day where the other cats go and hide. I try to stay out of their way.

Once, when trying to nap on the couch, one of them leaped down onto my stomach from the back of the couch before charging off across the living room. They only weigh about 5 pounds but if all four feet hit the right spot, this maneuver has quite a bit of kick to it, though I’m sure whoever the kitten was was disappointed that my trampoline proved less effective than the rocking recliner’s catapult.

Abel has become the champion drape-climber. Fortunately, they are of sturdy material, though when the sun shines through them, I am reminded of Romeo & Juliet – “cut him out in little stars and he will make the face of heaven so fine...” – because it’s something that could come in handy at a planetarium, little pinpoints of lights that might well be creating constellations of their very own. 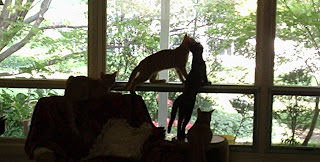 Most of my photos of the cats are not taken in motion. Well, yes, I have numerous photos of floors and desks, devoid of cats, because they move faster than my camera’s shutter-speed. So the ones that are worth posting are uncharacteristically of cats at rest. Like Guy Noir, here, helping to edit my blog-post. 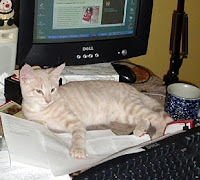 Caught in motion, however, were Abel & Guy Noir (see top photo), wrestling in a large tote-bag which I hadn’t completely emptied yet. A moment after I took the picture of Charlie & Abel (below) stretched out between my monitor and the keyboard, they had rolled around and changed positions before tearing off down the hall. (Incidentally, the desktop on my monitor is a photo of them plus Baker taken half their lives ago.) 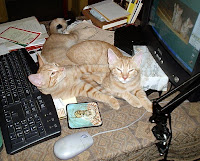 The space around the computer so far is their biggest contention. First of all, this has been Max’s space since he joined the family almost six years ago, if not in front of the monitor, then stretched out across the wrist-rest and preferably over one or both wrists, often laying his chin on my mouse-hand. So he’s not keen on sharing this space with a bunch of annoying half-pint over-achieving fuzz-mites.

Curiously, Charlie will settle in, purring constantly, with his head nestled tight against Max’s flank which just annoys the hell out of him. It’s hard enough getting anything done as it is between the purring, the whining and then the imminent attack, the swipe of a paw, a hiss, a growl before contentment resumes if only for a few brief seconds. 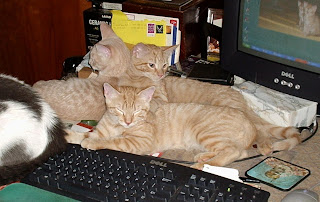 Only once have I tried to deal with all five kittens on this small computer table (which is, for the record, an old gate-leg table I picked up at a Connecticut flea-market for $5, fleas not included).

With so much energy on the cusp of critical mass, the center could not hold and in short order they all went off, not slouching, to the living room. The fact that three of them – and Max – stayed on the desk long enough for me to snap this picture runs contrary to the laws of kitten-physics where the primary law states “a body at rest tends not to stay at rest long enough.”

Speaking of rest, I feel a cat-nap coming on...