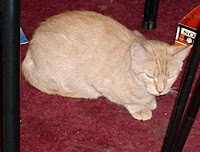 Much to my surprise, Frieda – the mother of the Mighty Handful who’d been spayed last Monday – put in her first appearance that same night, finding a new hiding place outside the bedroom that had been her home for the last four months! Considering she kept herself pretty well hidden ever since she arrived here, this was a momentous occasion, especially given the treatment she’d received when dragged out from under the bed that afternoon: I was sure it’d be 2012 or so before I’d see her again.

Not that she’s exactly one of the gang just yet. She’s still pretty aloof, a veritable Greta Garbo. And I still can’t get near her. But every little step is a bit of progress. And it was just good to know she came through the operation without any noticeable problems.

After I got home Monday night, I couldn’t find her: she wasn’t in her usual hiding spots in the “blue bedroom” or back in the bathroom under the toilet where she’d given birth to and raised her kittens. She didn’t seem to be in any of the adjacent rooms, so I figured she made it out to the living room.

Now, since I’m still in the process of moving my stuff into an already full house and haven’t quite assimilated everything, there’s a “spare bed” we’d used in the living room back when my father was ill and had converted the room for his use. Since it’s the most comfortable mattress in the house for me, basically, I’m temporarily sleeping in the living room.

And it was under that bed that I found Frieda. No big deal, considering: the important thing to note, here, is this is a different bed in a different room – she’s come out to join the rest of the family, even though she’d had the opportunity for the last month to do so but, to my knowledge, never did more than maybe check it out when I wasn’t home.

When I got back from work, she was still under the spare bed. After I finished bringing in the groceries, there she was, sauntering cautiously down the hall into the kitchen – she had apparently just gone back to use the litter boxes (I noted with a sigh of relief) but she wasn’t slinking and darting off to hide under the bed. Or anywhere. She sat there, watching me, while the kittens coming over to her as if saying hello. I’ve rarely been aware of any interaction between them since they’d been weaned, though once in a while I’d find one or two of them still curled up asleep with her back in the old haunts, especially Baker.

It was surprising to discover – since she was always just crouching under a bed somewhere before – her kittens are almost as big as she is, now! This makes it even more difficult to tell which of the orange tabbies is which!

Still, if I got too close to her, she pulled back and retreated to the bedroom door. Finally, she just sat there, peering around the door-frame as if waiting for me to go away.

More surprisingly, though, was seeing both Max and then Murphy stroll past her without any acknowledgment: no hissing, no cautious slinking followed by a mad dash to get around her, nothing! It was like she wasn’t even there! And Frieda didn’t react to them, either: it’s like they, at least, have gotten used to each other.

In the morning, I couldn’t find her anywhere. I spent an hour checking under everything except a recliner where Max had curled up and spent the night. Every chair, in fact, had a cat on it – a couple of kittens here, one of the Big 3 there. Frieda was the only one not visible. It wasn’t until hours later that I realized I hadn’t checked Max’s recliner – and there she was, peering out from the back of the chair through a narrow space that seemed made for a hiding place (and not a very safe one if the recliner would be put to use). So I left her there, putting a bowl of food back of the chair for her before I left for work.

And so it went through the week: Friday night, I actually saw her four different times – walking down the hall, scooting through the kitchen, sitting in front of a bookcase, checking out the forest of legs under the dining room table – probably more time out-in-the-open than I’ve seen her since I brought her inside. Maybe she’ll acclimate, yet!

Saturday night, she actually joined the kittens for dinner – mother and all five kittens crowding around the bowls, chomping away. Of course, my camera was on the other side of them, and I would’ve scared her off if I tried to get past them, so I let the occasion go without recording it. 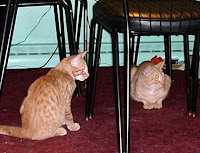 This morning, however, I woke up at 5am and saw someone “meatloafing” under the dining room table. It was Frieda (see picture above, taken after she'd already shifted her paws), just sitting there, her front paws folded underneath her in the classic “could-be-mistaken-for-a-meatloaf” pose. And this time I was able to get some ‘snaps’ of her. Soon, Baker, who’d been sleeping nearby, came over to say good morning. In this picture (left), they’re looking off toward the back door where Charlie was getting into some mischief with a ball of crumpled paper. 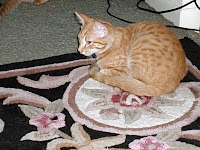 And that’s the latest from Le Maison du Chat.

Here are a couple of pictures of two of the kittens, taken last week: Baker (right), the Shy, Quiet Type who is rarely around when I’ve got the camera out; and then Abel looking like a real sweetheart of a crooner, nestled into a chair with its maroon throws.

After another run to the store last night, I realized it takes 42 cans of cat food and two 3-lb bags of dry food, not to mention the containers of cat litter (average, I think, 20 pounds) to make it through a week.

But now, back to working on the novel, not that it will really help bring home the tuna...
Posted by Dick Strawser at 10:29 AM