Five Little Terrors & How They Grew 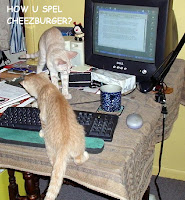 The title for today’s post is in keeping with previous thoughts on the books of childhood – though not one I ever read. I did forget a large, three-volume boxed set called “The Animal Kingdom,” published in 1954 which I was reading through when I was 8. Little did I know that fifty years later (much less that I would be writing the cliche “little did I know that fifty years later”) I would be living the Animal Kingdom. And five of them are four months old today...

Going through six cans of canned cat food a day plus several scoops of dry bits and the daily detail at eight litter pans, I was reminded of friends of my parents, when I was a child, who had eventually taken in 30 stray cats they had rescued from city streets and had neutered. They converted the basement of their old row home into ”the cat house,” full of boxes, ledges and shelves for them to play and sleep on, bought a couple children’s sand boxes to be converted into giant litter pans, and spent a good part of their off-work time scooping out the sand boxes with shovels and preparing food bowls twice daily, not to mention disposing of 60 emptied cans a day (in the days before recycling, much less pop-top cans and electric can-openers). We used to joke about having cat litter delivered in a truck, dumped directly by a chute into the old coal storage room at the front of their basement.

Comparatively, with only nine cats (a third of whom are ultimately temporary), it doesn’t seem so bad.

On the other hand, with more cats and a larger space to house them in, I find the opportunities for lost objects and the Bermuda Triangles into which they can disappear grow exponentially.

There have been many rompings since the last time I blogged about the kittens as they adjust to life on the loose throughout the house. Which is more than I can say for the Big Three: Sieti, rarely seen, still hisses herself into a snarling furball when one of them gets even three feet from her; Max, occasionally still making his high-pitched gurgling warnings when one gets too close, seems to be accepting them, more resigned than gracious; I have been changing the towels on the bed more frequently this past week, thanks to Murphy’s running commentary...

The kittens generally give the older cats considerable leeway, though it’s difficult, being a kitten, to pass up an opportunity to be annoying to your elders. Murphy, cornered in the one bedroom, had to deal with first one, then another kitten flopping down in her immediate floor space, each staring at her, until all five had her completely surrounded, each one stretched out in the same exact position. Leaving out a wailing growl that sounded weirdly like “call the exterminator, will you!?!,” she closed her eyes and made a bounding leap for safety. The kittens then moved, en masse, on to something else. 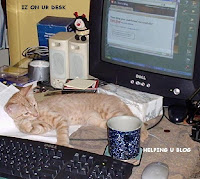 Max, who has been curling up in front of my computer for the last six years, has now had to contend with Charlie who likes to do the same and thinks the space is his. Thinking he’d simply elbow the kitten out of existence, Max settled in, gradually shoving him off to the perimeter of the desktop. Of course, the flipping tip of an adult cat’s tail (unlike a dog’s wag, the sign of extreme annoyance) is too tempting for a kitten of any age and Charlie, already perfecting the innocent’s skill of pushing the envelope with as little physical evidence as possible, soon escalated the annoyance to a near-nuclear encounter.

So far, Guy Noir treats all cords and cables as chew toys. While I was chatting with a friend on-line, he chewed through the mouse cable which managed to freeze everything. At another time, in the midst of blogging, he managed to create two phone cables out of one, wondering why I wasn’t on wireless, anyway. He just can’t understand the concept of dial-up: he’ll push me into the 21st Century, yet (“oh, and skip the dry food: it sucks”). And then there’s yet another excuse not to use the cell phone: the recharger unit is now two non-interchangeable wires.

Years ago I had read that to deter a cat chewing on wires and phone cords, simply smear tabasco sauce on the wire. It would take, I estimate, a vat of tabasco sauce to protect all the wires and cables in my house. Nor am I particularly fond of the scent of aging tabasco sauce emanating from every appliance and computer. Besides, I’d tried it with my first cat, Chaumleigh, an inveterate wire-chewer, and he actually liked the flavor of it so much, he went around licking off all the sauce before proceeding, once again, to chew on the cords.

They have also discovered how to turn on the record player which, being 21st Century kittens, you’d think they’d have no comprehension of: but one night, I came home from work and discovered the needle riding the turntable ‘round and ‘round (memo to self: buy, if one can find, a new needle). When it happened again, a few days later, I realized how they’re doing it: hopping up on top of it, usually from the floor, one foot adroitly steps on the “ON” button located just below the edge of the cover. Now I know, for what it’s worth, to keep the arm of the player firmly hooked in place. Or, since it hasn’t been played in like 10 or 12 years, just unplug it.

The other morning, I heard this odd motor noise humming away in the living room, fairly quiet but not a normal sound I’ve associated with the house yet. Upon closer inspection, it turns out to be the recliner we’d gotten for my mother a few years ago which lifts and elevates you from a seated position and also has heat and a vibrating motor (though it does not make coffee in the morning nor bring you a beer). The remote unit is kept in a pouch on the side of the chair: presumably the “magic fingers” were activated when one or more of the kittens bounced against the side of the chair, hitting the pocket and accidentally (one hopes) pressing against the remote. Okay, so I’ll just unplug the chair.

Then there was the afternoon I walked into the bathroom to find the whole roll of toilet paper neatly piled on the floor. At least it wasn’t as bad as this – and a lot easier to clean up.

Making the bed – not to mention the implementation of a liner of trash bags and towels to foil Murphy’s on-going pissive resistance – for some reason incites a great deal of curiosity from at least three of the kittens, so that by the time I’m done, like a perpetual motion machine I have tossed 40 kittens off the bed, one jumping back up as soon as the most recently scooped-up one has landed on the floor.

Last night, while re-working last summer’s sketches for the eternal novel-in-waiting, I crumpled up a sheet of note-paper intended for the wastebasket before I realized this had the attention of ten beady eyes in the shadows beyond my desk. Charlie, the usual master of ceremonies, was the one to grab it but rather than bat it around with the others, he held it tightly in his teeth, and, growling as if he were a doberman, ran full speed from one end of the house to the other with everyone else in typical hot pursuit.

And did I mention Frieda Farrell, their mother, went into heat last week? The vet is not scheduled to arrive until next week...

P.S. Here's Abel sharing the space with Max: this one worked out much better!
Posted by Dick Strawser at 4:05 PM