It was not the happiest of days for Frieda Farrell, ex-street cat from mid-town Harrisburg who has spent the last 4 months (short of a day) living in a bedroom of my suburban house. Despite the fact her five kittens have all acclimated themselves to me and the entire house, and that she has been handed two bowls of canned food and a dish of dry-bits every day, Frieda has remained as feral as the day I finally managed to rescue her back in April -- at least, I like to think of it as rescuing her (I'm not sure what her take on this turn of events has been).

In those four months, except when I'd peer under the bed or behind the toilet to check on her, I saw her out in the open perhaps a dozen times, and then only fleetingly, high-tailing (or low-tailing it, as the case may be) back to the apparent safety of her hiding place.

But it was time - she'd gone into heat last week, after all - and so I made arrangements with a travelling vet to come to the house and do the deed here. Whatever it cost, I assumed it would be worth not having to try catching her again, renting a tranquilizer gun and transporting her to my regular vets myself.
And so today was the day. 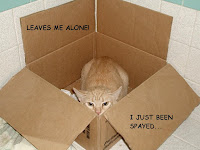 Without knowing what was in store for her, she'd found a new hiding place that morning. One of the old box-springs in the bedroom had a tear in the under-fabric and she was actually hiding INSIDE the box-spring, verified by a slight nudge answered by the old familiar hiss. This could make catching her even more of a challenge.

When the vets got there, they brought in a long pole with a noose on the one end. Several snarling minutes later, after we up-ended the box-spring, he succeeded in nabbing Frieda who had clearly decided she was not going to go willingly. Held firmly by her hindlegs and stretched out along the pole, noose still around her neck, positioned almost upside down, she was hurried out to the van and given anesthesia. It looked awful and if not bad enough from her standpoint, I was thinking what it must have seemed to Baker, one of the kittens who still spends a lot of time hanging out with her under the beds and who happened to be with her when the vet arrived.

If after 4 months and she still hadn't calmed down enough to let me pet her, I figured by now it might be 2012 before she'd let me near her again, after this routine. I can just hear the next chapter of "Tales from Behind the Toilet" - except there won't be any more kittens for her to impart the wisdom of the ages to, now...

There were tests to run, shots to give - and of course the spaying itself. Fortunately, she did not have diabetes as I was afraid (she'd been drinking a lot of water, nearly flooding the litter box even after the kittens were weaned) - and a good thing, too, since I was trying to imagine giving her shots or pills every day as I had done for 3 years with Tobie, a previous cat of mine who became diabetic when she was about 9 years old. But returned to her bedroom, Frieda shakily scooted back under the bed once she was released, still woozy from the anesthesia but determined to have nothing to do with the Big People.

This did not, however, stop her from hopping up on the bathroom countertop moments later, wooziness and incision aside, just as she had done the first night she arrived here. Baker hopped up right along side her and gave her a sniffing over, purring quietly as if to comfort her. I chose not to bother them and just stood there, talking quietly to her, sensing the fear and uncertainty in her eyes and the likely undercurrent of feline profanity that would have turned me into a pile of mince-meat in a flash.

A few minutes later when I returned to the bathroom, she had now settled herself into the box in the corner (see picture, above). From there, then, she settled down behind the toilet again and I just hoped she would be okay. When I got back from work tonight, she was still tightly curled up in the same corner, her eyes bright and wary as if saying "don't... even... think... about touching me..."

And so we'll see what tomorrow brings.