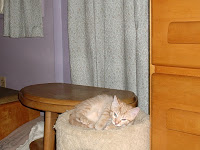 Summer can be so many things: as Abel here is discovering, it can be a chance to unwind (and maybe sweat while you’re doing it), take things less seriously (and dress accordingly), get away from it all (while moseying). Like swallows returning to Capistrano (or more likely buzzards coming back to Hinckley, Ohio), summer for me is not official till I see the fireflies at dusk (which, working second shift, can be more evanescent than usual). Deep summer is the constant humming of cicadas, one of the more annoying sounds in nature, especially for someone with my brand of hyperacusis.

Soon, the Dog Days of Summer will be upon us: we’ve been lucky this year, here in Central PA, with periods of hot humid weather alternating with cooler drier air (which uncharacteristically seems to be hitting us on the weekends). Of course, the difference for me this summer is, I’m now in a house with Central Air, unlike the first-floor city apartment of yore where you were afraid to leave the windows open at night because it was also Break-In Season (of course now I’m awaiting the Electric Bills of Summer, but that’s another chapter).

At the moment, however, for me – but especially for the Big 3, Sieti, Murphy & Max – these are the Cat Days of Summer. The kittens are now three months old which means, figuring out the comparative ages of cats and humans, they are the equivalent of having two-year-old quintuplets loose in the house: welcome to the Terrible 2s (which last, I’m told by parents who have survived children, until they are perhaps 22 and, if not before, out on their own).

If I had known they would be such a handful, I would have named them after the Russian Five (not to be confused with another Russian Five...): Nikolai Rimsky-Korsakov, Modeste Mussorgsky, Alexander Borodin, Mily Balakirev and, uhm... oh yes, the one most people have never heard anything by, Cesar Cui, the Little Finger of the Mighty Handful as they’re also known. But those are some pretty stiff names for something as tender as a newborn kitten.

The cream-tabby (originally Blanche until I discovered it’s a male, so he became Guy Noir) could be Rimsky. Of the 3 Blondes, perhaps Charlie would be Mussorgsky (more macho, his personality might warrant calling him “Moose” for short). Abel & Baker would probably be Borodin & Cui, respectively, since these are only temporary names to begin with for them until they find new homes and subsequently new names. That leaves Balakriev for Blanche (originally named Guy Noir three months ago before I knew this black lump of squirming fur would turn into a tortoiseshell and therefore a female): as the only female in the bunch, she could then become Millie. If I’m only going to keep three of them, however, then a matched set of Five Names is kind of pointless. (Though I kind of like “Moose”...)

For the past week, all five have been out-and-about in the rest of the house. I had kept them “quarantined” in the largest bedroom until I knew they would be safe to introduce to the others (no contagious diseases or parasites), but once they were okay, there’s still the issue of their mother, Frieda Farrell, who, still as feral as she was the day I trapped her in at my apartment, has not yet been tested. If the kittens need to retreat to the safety of their lair, I have to leave the bedroom door open. Since Frieda rarely comes out from under the bed when I’m around, it’s unlikely she’s going to start wandering through the house herself, but the others might go exploring in this room and be very surprised to find another fully adult, fully armed and extremely snarly cat.

From the kittens standpoint, these days might be headlined “NEW WORLDS TO EXPLORE.” From the Big 3's standpoint, it varies: “ROME FALLS AFTER BARBARIAN INVASION” Murphy heralds from the kitchen counter, looking down with disdain in between various acts of pissive resistance on my bed (I now do several laundry loads of towels a week); “THE END OF CIVILIZATION AS WE KNOW IT” is probably Max’s constant whining lament; Sieti, lobbying loudly for a very high fence to keep out this wave of undesirable immigrants, spends most of her time hiding on the floor of my bedroom closet or behind the computer desk, hissing like a steam engine ready to explode when any of them get close to her. 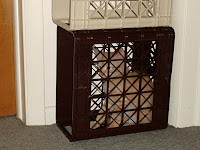 Max has taken to pummeling his scratching post like a boxer working a punching bag. Curiously, Charlie thought this was pretty cool and tried it himself, but he doesn’t look quite as awesome (yet).

Max and Murphy sometimes hide in the shelf under the microwave where, for some reason, they seem to be invisible to the horde of furballs romping the length of the kitchen and dining room beneath them. Meanwhile, Charley's preference for a hiding place leaves a little to be desired in terms of general invisibility if not practicality.

Having now gone from exploring to playing, they seem most fascinated by the chair that goes with my grandfather’s desk (his graduation present in 1905) and it is not unusual to see all of them engaged in typical kitten games on the seat, between the legs and levitating up to the very top, 4 feet off the floor and advantageous for aerial attacks.

The picture (“Commotion in Motion” at left) shows four of them on the chair – you can barely see Blanche the Tortoiseshell getting ready to slide off the seat just as Guy prepares to lunge for the top while Able & Baker tussle on the seat – Charlie is already exploring the desktop. Moments later and before this sluggish camera reset itself, Guy took a flying-squirrel leap to the floor, chasing Blanche out through the kitchen and around the living room. (Nascat would be a good name, too.) Keep in mind, it’s a 67-foot straight shot from my study to the garage door which I think they can do in 3 seconds, now.

I should know better than to walk around the house without a camera ready to shoot some candid kitten-ish scenes. Like when Abel & Charlie treed Max on top of his scratching post – imagine a 12-pound cat balancing King-Kong-like on a 4"x4" post with two kittens each under 3 lbs jumping up at his tail – or the time all 5 kittens, buzzed by a suicidal fly, ended up charging after it in a flash, first to the top of the dresser and from there, two of them suspended from the drapes, all in a few seconds... 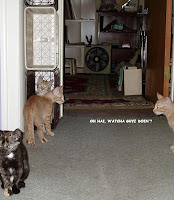 They all move much faster than my camera can. Now, they're fascinated by these little plastic storage crates outside my study door, not that they’re a great place to hide, but they apparently assume they’re too small for any of the Big 3 to get them.

Then of course this morning I find all five of them racked up like bowling pins in the doorway, all sitting in the same position – and the camera, after I just took another photo a minute ago, says “oh, sorry, battery dead...” Argh...

Meanwhile the process of settling in continues: I needed bookcases at the house before I started moving my library out from the apartment. Odd, though, to go to one of the larger office furniture & supply stores in the area, find three varieties on their floor that I want, order them and then find out one of them has been discontinued. So I order the rest of them, only to have all but the two really important ones show up. Oh yeah, they’d deliver them between 9-and-5 on Tuesday which I figure as a second-shifter I could handle, so of course they arrive at 7:30am and the guy has no idea why there are only 6 of the 8 units I ordered... Several phone calls later it turns out they’re on back-order – no wait, they’re discontinued, too, darn... So, what, the central office doesn’t tell the individual stores what in their stock is no longer available? Kind of an odd way for someone to design an office space, don’t you think? I want to stop over there today and see if those units are still on their sale floor and try ordering them again: who knows, maybe this time they’ll have them... hah hah...

I was just thinking, not that I mean any disloyalty to Public Radio branding: while I've disliked the idea of naming a dark cat Blanche (which after all means white) and who knows if my kittens will outlive a certain radio private eye, but now I'm thinking about renaming Guy Noir the cream-tabby as Blanc (which means White) and renaming Blanche the dark tortoise-shell as Noir (which means Black). Hmmm... 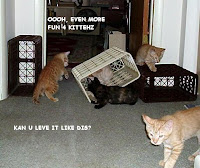 Meanwhile, a beautiful weekend: good times for summer concerts or for reading Harry Potter! Of course, indoors, the forecast is calling for frequent but widely scattered storms (despite occasional showers) with possibly damaging winds and large fur-balls. Excuse me, but I have to go check something: I just heard a crash in the living room...

Pictures by Dr. Dick... Captions inspired by LOLcats...
Posted by Dick Strawser at 11:30 AM