Kittens beyond the Toddler Stage 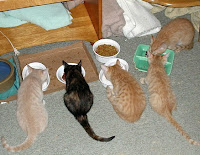 For the past week or so, I haven’t been taking many pictures of the kittens – it’s not that they’re now beyond that “adorable kitten” stage but fortunately, they have stopped growing visibly by the day. Plus, the more active they are, the more difficult it is to get group shots unless, of course, they’re eating, but even then, sometimes, they play musical dishes with the greatest of ease.

Speaking of shots, now that they’ve had theirs (at least the first round) and the worm medicine should have cleaned them out (this was a pre-emptive strike, but the vet has known few kittens from a stray mother who wouldn’t’ve had some internal parasites to deal with), it’s time to introduce them to The Big 3.

Thursday night, after I spent an hour back in the kittens’ room, I went to crawl in bed only to discover an odd wet-spot near the pillow that... uhm... had a familiar odor that... drat! One of the cats peed on my bed! Judging from the placement, this did not appear to be an accident but perhaps an act of “pissive resistance”... 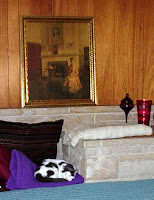 And since Max was the most wary as I tore the bed apart to change the sheets (and at 3am I was beyond pissed), I suspect he’s the culprit. He’s also the only adult male and perhaps knowing there are four young males cordoned off in this otherwise inaccessible room, he may feel the most threatened. He probably does not remember what it was like, six years ago, when I introduced him into the household as a newly adopted stray: the three females then (in addition to Murphy and Sieti, there was also Sieti’s mother, Tobie) accepted him easily enough, but the one had the most difficult time of it was the senior male, an 18-year-old black-and-white cat I’d recently taken in named Keyboard who’d outlived my neighbors. Eventually, Keyboard became less aggressive, Max found less need to assert himself and the apartment (cramped as it was) returned to a reasonably acceptable state of chaos.

So this is the first time I’ve had to introduce a new cat to the caboodle – and there are five kittens to introduce, not counting the mother who is still untested and unbowed.

I’m not sure whether to do this en masse, just let all 5 of the kittens out at once to overwhelm the adults by sheer numbers and excess of energy and curiosity, or do it one-at-a-time so they can be officially introduced. I tried this yesterday with Charlie:

And then, later, Blanche:

Max: hissed and batted at her – Blanche sat back with a “what’s with you?” attitude
Murphy: sniffed a while but no hiss before returning to the paper bag under the table...
Sieti: just ran away and hid somewhere for the rest of the afternoon.... 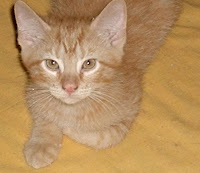 Meanwhile, this morning, I managed to get a few portrait shots of some of them. Only once did Charlie sit still long enough for this delayed-reaction camera. Other than the one where he was detained by an especially tempting phone cord, there are two shots of him with the head chopped off as he moved out of range, and several of just blank carpet. Blanche, like me, has found the best placement when dealing with a camera is standing behind the idiot holding the camera, and Baker normally just stays under the bed. So these photos are of Guy (atop the post), Charlie (left) and Abel (below). 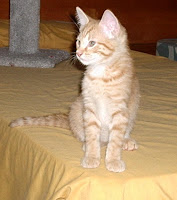 Not that much else is going on: the back continues to be a problem but at least now I've got a number of bookcases on the way. I ordered a ton through Office Max which should be delivered mid-week, and even though I'm no fan of Martha Stewart, there was a bookcase in her furniture line at the local K-Mart that I really liked and knew would look well in the living room (while the house is not full of antiques in the general sense of the word, just old stuff, this seemed better than the standard style of nondescript bookcase one normally finds these days. There are two small ones in the office at this point, both pretty old, one of which has scribbled on the back where but not when it was purchased: that means it was probably my dad's bookcase when he was a kid, making it about 70-80 years old or so.

There's been no composing, unfortunately -- though when a colleague came over to help with the one bookcase yesterday, he mentioned one of his neighbors is a piano tuner who has a small trailer he uses for moving pianos. Wow -- that means I might be able to have him move my upright piano out from the apartment and get my studio set up in the room my mother used for her office (which had been my childhood bedroom)! Hopefully, that will be this week's project.