Kittens, Gardens, Angels & a New Work on the Back Burner 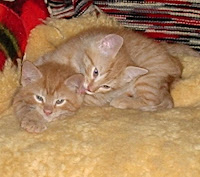 Friday was a big day.

The kittens, who turn 10 weeks old on Monday (and that's Charlie and Abel in the picture), had their first collective adventure outside the confines of their known world (i.e., the bedroom they’d branched out into after being born behind the bathroom toilet): catching them and putting them into the two cat carriers was easier than I thought and the trip to the vets was a very quiet one – considering some of the other cats who do not travel well and might be classified screamers, it amazes me that a stray cat's kittens were all quiet if not calm. While they all got their first round of shots (they go back in a month for the rabies shots) and took them graciously, Charlie was a little reluctant to part with any of his blood and therefore ended up with a bandage on his leg that he kept holding out for everyone to see like a little kid (“so cool, check it out”).

The good news is their blood test came up negative for feline leukemia, a huge relief.

The doctor who examined them (one I’ve been going to since 1990 at a clinic I’ve been going to since I was in 6th Grade and we took our pet skunk out to them back in the ‘60s) was amazed they had no visible parasites, especially ringworm (which is surprising when you consider I took Frieda in off the street just two days before they were born and I’d never even thought she might have fleas). He gave me some internal worming medicine just in case, but flying colors for all five kittens.

It will take a tranquilizer gun to get Frieda to the vets, however: I’d already considered calling in one of those “traveling vets,” so that’s next on the to-do list. Not only does she need her shots and to be tested, she’s also getting spayed.

But Friday night, while I was sitting in the room after I fed them, Frieda did something she has not done in the 10 weeks since I’d rescued her: she let me see her!

At least, when I fed her on my old apartment’s porch, she would let me get a little close to her as long as I didn’t try to touch her. But now, seemingly more feral than she’d been before, she’d rarely slink out from her hiding place (first, behind the toilet where she raised her litter; now, from under the twin beds in the bedroom) and then only to eat as quickly as she could, always attuned to how far away I was (and the farther, the better). She always waited until well after the kittens were done, like a good mother, but this time was different, a little less wary and hurried as if she were savoring the meal, not bolting it like fast food.

I sat in the old chair at the other side of the room with Blanche curled up beside me, Guy Noir stretched out on my lap and Charlie on the back of the chair playing with my hair. Then Frieda plopped herself down beside the one bed facing me and rolled over into the Buffet Position. In a flash, Baker and Charlie joined her as did, gradually, Abel and Guy, Blanche only reluctantly giving up the comfort of her chair. It amazed me that, at 68 days, she would still nurse them (much less have room for all five of them). Soon, there was a mound of slurping and purring and I swear she did it just to prove to me who has the real control over her kittens!

When they had finished, they nestled in around her (in this picture, Baker rests behind her, with Blanche in front and Guy beside her; Abel and Charlie were already off and romping) and she stayed there for a good 20 minutes. Even after the others had wandered off to play, she continued stretched out on the carpet, even moving a little closer to me but not too close.

It was, in a way, a moment of understanding, perhaps, which I’d waited for for a long time. Ironic that it should happen the same day I’d taken the kittens from her for the first time (they were gone for almost 3 hours) and they must have been full of tales about being poked and handled by other strange people.

Or it could just be she’s getting claustrophobic under that damned bed. After all, she’d had the run of the streets of Midtown and was never one to just hang around for lack of anything to do. Being cooped up in this bedroom, as large as it is, must seem like prison. But she was given good grades as a mother by the vets, having raised five healthy and very cute kittens. As she sat there looking at me, she seemed proud of that: I doubt any of the earlier litter she’d had last summer did as well if they survived at all.

Meanwhile, things in the garden haven’t been doing as well as I’d hoped.

Plants that like “well-drained” soil apparently prefer to commit suicide than just grow not-as-well-as-they-could when transplanted to the rocks and dirt that passes for my yard. The first to go, a variegated bushy plant called “Jacob’s Ladder” reached its last rung after the first week, to be replaced by something called “Angelica” which so far seems to be doing fine. On the other hand, the wooly thyme, a ground-cover herb so durable you can walk on it, turned into a mass of brown in two days. The hoped-for carpet of alyssum seedlings was hoovered up in short order by the rabbits who have found that their fresh tender shoots were preferable to the tough and bitter herbs that comprise most of what passes for a lawn. 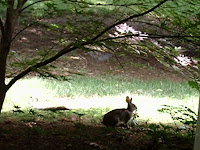 It's more plantains, dandelions, chicory, wild strawberries (they prefer my neighbor’s cultivated ones, of course) and even the clover and oxalis than real grass. Years ago, Mother and I joked about just getting dozens of containers of wildflower seeds called something like “meadow-in-a-can” (phlox, poppies, cosmos and who knows what all) like somebody we knew had once done, giving up on their patch of dirt otherwise inhospitable to the well-manicured suburban lawn, a modern contrivance that seems to me about as impractical as the necktie in men’s dress codes. But that’s another issue and I digress. 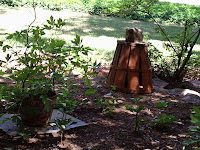 Then I discovered the rabbit(s) had mowed down the designer fern with its rich dark emerald-green fronds planted near the back. Do I try peach-basket diplomacy or just bomb the hell out of them?

Squirrels might have been the culprits with a yellowish-green sedum that apparently offended their sense of garden decor, so they just kept digging at the center of it until they had uprooted most of it, scattering the broken stems over a two-foot-square area (not exactly how I imagined a ground cover to cover ground).

Today, I’ll put the guardian angel out in the garden – it certainly needs one (better, if I could get one that emitted cat-like noises when it senses the nearby presence of rabbits, squirrels and chipmunks, just to scare them off).

This little statue seemed appropriate for my mother’s memorial garden because she was always praying for the angels to keep watch over me: a few days before she went to the hospital in February, I had to call home every time after I left work following the Valentine's Day Blizzard so she’d know I was okay, even though she didn’t bother to tell me about all these “breathing spells” she was having.

Finding the right angel wasn’t as difficult as I thought, wanting to avoid something too morose like it had just stepped down from a tombstone. The one I found – holding a small bird in its outstretched hands like the sparrow of Matthew 10:29 – was something Mother would have liked herself, a bit of whimsy for being a little different from the stereotypical image but a meaningful one for us both, all the same. 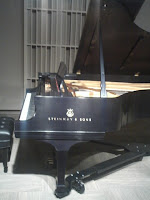 On Thursday night, I had a chance to practice on the WITF Steinway Grand in the recording studio. It was the first time I'd touched a piano in over a month, probably only the fifth time I'd practiced since mid-January. This time, things came back a little quicker, despite stiff fingers and wrong notes. Like physical exercise, it felt good on several levels - especially realizing I could play through some things I haven't worked on in years, especially some Brahms (the G Minor Rhapsody fell together quickly unlike the Schumann Fantasy in C last movement which fell apart even more quickly; Brahms' A Major Intermezzo and his transcription of the Bach D Minor Chaconne for the left hand alone, a good muscle stretcher but only after you're suitably warmed up which I wasn't, really) and some Bach Preludes & Fugues (especially the C-sharp Minor fugue from Book I of the Well-Tempered Clavier, one of my favorites), always good for the soul, too. Though only an hour that went by quickly, I felt like I'd run several miles, both exhausted and elated.

I look forward to getting my piano out to the house, though I'm still unable to do much in the way of lifting which makes the next stage of the move more of a challenge. I'd seen the doctor on Thursday about the pulled muscle &c and he said it could take six months for it to heal if I let it rest -- that would be November 1st!! I think I overdid it on Saturday, though, going in to pack up and move some more books and CDs as well as some sketches and manuscripts, including my full score of Debussy's Pelleas et Melisande which I want to follow with the recording, part of my summer Debussy Discovery project.

One of the things I found, sorting through a shelf-ful of manuscripts, was a set of three short choral pieces I'd written at a fairly down time around Easter 2001 - three short Tenebrae responsories - but never really polished into final shape.

As my mother would have pointed out, “there are no coincidences.” I've started working on another set of short choral pieces, some of her favorite Bible verses, which are so far only in the planning stages. I've been listening to a lot of Renaissance polyphony, mostly Josquin des Prez, to get a feel for their continuous textures and seamless flow of the various lines, something my more harmonically oriented style lacks. This time, there are five sections: Romans 8:28; Proverbs 29:25; Ecclesiastes 3:1-8; John 13:34-35; from John 14:1-20.

And I'm eager to get started on them once the piano gets moved into place in my new study. But that's another project. Feeling out-of-sorts because I'm not composing is a good sign: it means I'm still a composer. No pain, in it's own way, no gain...