Kittens On the Run 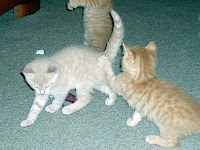 While every Day could be Cat Blogging Day at Le Maison du Chat, the kittens are well into the “leaps and bounds” stage, now loose full time in the master bedroom (as if I didn't know already who's in charge here) and fully capable of going from 0 to 60 in 4 seconds. With a camera that takes 3 seconds between pressing the button and the flash going off, I have numerous photos of empty carpet to prove it.

(For instance, in the first photo (above right), Guy Noir is ambushed by Charlie just as Abel reared up into the Godzilla Attack Position when the flash went off. Oh well...)

The other day, Abel discovered if he throws himself at the side of this old stuffed chair in the corner (which actually appeared in that 1947 photo of my dad playing the Hammond organ in our living room – as I said, my mother never threw anything away), he’s like velcro and can climb up the back of the chair with ease.

Here he is (left), having scaled the side of the bed. Abel has become the more adventuresome of the five even though he still hasn't quite mastered the art of eating the adult food Charlie, Blanche and Guy Noir are already enjoying. 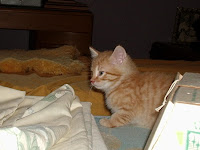 And there's nothing like a good relaxing rest after a hard climb (right).

This velcro maneuver does not, unfortunately, work for the highly polished surface of the blonde-wood desk where, much to their surprise, they fall immediately back to the floor, particularly bothersome once you’ve made it all the way to the top of the chair (several kitten-lengths off the ground) and figure you can just throw yourself over onto the desk. Oof!

And, by the way, I’ve discovered it does not work well on my legs, either.

Another discovery they’ve made is what a sweet cave the dark space under the dresser makes, though they will be disappointed in a few weeks when they next discover they will be too big to squeeze their way in. Soon enough, they will be going on-line and running up my bills at iTuna...

And now they’ve been introduced to their first catnip toys, too. I got them kitten-sized catnip mice, hoping it would keep their minds off the phone cord. It works -- for a while.

At one point, after Guy tossed the red catnip mouse, seconds after this picture (left) was taken, a paw suddenly appeared from under the dresser -- Baker, otherwise invisible so far this play period, was perfecting his audition as Thing for the Addams Family musical, and quick as a wink whisked the mouse back into the cave. In a flash, he was gone, mouse and all, and my loud LOL caused the other four to scatter to the four winds (and once again, a picture of empty carpeting).

Baker is still fairly reclusive: though he always comes out to play eventually and romps well with others, I still haven't seen him eat any adult food yet. He spends much of his time curled up in the corner with his mother, Frieda (who still has yet to come out from her corner of the bathroom when I'm around anyway). He's the only one who shies away from me -- and will occasionally hiss at me when I go to pick him up -- so perhaps he has been listening too much to those “Tales from Behind the Toilet” she's been telling them, especially regarding The Big People. Hopefully, time will prove these to be nothing but Old Cat Tales... 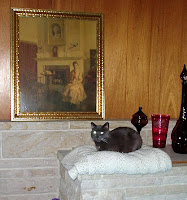 Meanwhile, Murphy, the Russian Blue of the Big Three, a cat I took in as a stray almost 12 years ago, plays the perfect hostess, sitting on the planter by the fireplace, enjoying the relative peace and quiet of the living room. She's been wondering what, exactly, is behind that door: she's met one of the kittens and hasn't seemed overly concerned, but that was before they were going 50mph in a 35mph zone... and little does she know there are five of them!