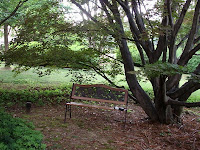 It's been a quiet weekend for the most part, since I've been trying to rest my "pulled muscle and hernia" -- the doctor said I shouldn't be lifting anything over 10 pounds which means, I guess, I can't read that new translation of Tolstoy's "War & Peace" I got the other month... Now that I've finished Kiran Desai's "The Inheritance of Loss," I started looking around for something else to read and decided to pick up where I'd left off in Dostoyevsky's "The Idiot." Curiously, I sat down on the garden bench underneath the spreading Japanese maple (the one that 45 years ago looked like a tiny stick in the middle of the yard) and began reading a paragraph that began "He thought about that, sitting on a bench under a tree in the Summer Garden."

Easily distracted by watching the chipmunk on the porch and the birds at the feeder, there wasn't much to think about on a beautiful mild Sunday afternoon. 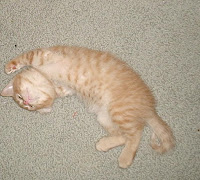 It had never occurred to me, for instance, that kittens apparently learn to purr. Friday night was the first I heard any of them purring – Charlie, first, who then on Saturday velcroed his way up onto the ugly chair beside me, nestled down beside me and began purring like a miniature outboard motor. Later, Blanche did the same thing, though not as loud.

Here is Abel checking things out from the arm of the ugly chair This chair, over 60 years old and still with most of its original stuffing if not upholstery, is covered by a couple of strikingly conflicting throws (I should perhaps do something about that) including a strangely yellow sheep-skin we’d once used to make my dad’s wheel-chair more comfortable for him. Regardless, it has become a center of kittentivity from climbing and clamboring to resting and observing. Once in a while, when I manage to sneak into the room,

I will find two or three of them curled up on the seat sleeping but of course they’re usually up and at my feet before I get the camera warmed up and ready to go.

Baker, meanwhile, remains elusive, usually back by Frieda’s side. Last night, he came out to play with the other kittens, but he still 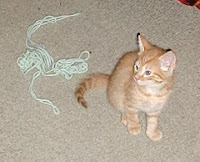 runs from me whenever I approach him. I was concerned that he was still nursing since I’ve never actually seen him eat adult food from one of the bowls, but some of the cat books I have mention kittens are weaned between 40 and 50 days’ old. And they’ll be 50 days old on Monday. It’s just odd, considering Charlie and Blanche started eating some of Frieda’s canned food on Day 31, Blanche even crunching away on adult dry bits later the same day! I’m still having problems getting used to calling the kitten previously known as Guy Noir “Blanche.” Sometimes, looking at her often quizzically sad expression, I recall the name I’d given a stray long-haired hamster taken in over a decade ago (yes, found on her back, lying in the gutter after I’d parked my car and nearly run over her: how she got there was always a mystery) who became Bertha deBlooze. I suppose 10 years is enough time to allow a name to be 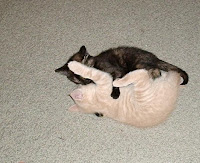 recycled. On the other hand, watching the tortoise-shell and the cream tabby wrestling away, perhaps Yin & Yang might be better.

So last night, I went out and got one of those “Cat Condos” – my other cats have one

they’ve ignored religiously for the last 9 years but as soon as I brought this in, two of the Big 3 were in and out of it in 30 seconds. The kittens, however, took a while to get the hang of it. This afternoon, I managed to catch Charlie & Blanche sharing a quiet moment, meatloafing on the roof, but pretty soon it was a rowdy game of King of the Condo as all five of them threw themselves into the game.

Somewhere, I think there’s work to be done...
Posted by Dick Strawser at 4:16 PM