After much debate and subsequent non-scientific poll, it appears the latest names for the Tortoise-shell and the Cream-Tabby kittens will just be the reverse of the names originally given them at birth, Blanche & Guy Noir. The female Tortoise-shell formerly known as Guy Noir is now Blanche Noir (see right)...

...and the male Cream Tabby formerly known as Blanche (see left) will now be known as Guy Noir. Though it annoys me to name a dark cat "Blanche," perhaps there's a bit of humor in that, but hey... it's still Guy Noir & his lovely sister Blanche.

I had considered Positive and Negative, but then I'm not a photographer (and I have the photos to prove it). I had even toyed with the idea of the "white" one being C Major and the "dark" one F-sharp but then I contemplated how many times I would have to explain where that came from and decided "naaaah..."

The Orange Tabbies, all males, are still Abel, Baker & Charlie, though Abel & Baker are becoming more alike as they get older -- they will be six weeks old on Monday, after all. I suppose I could change their names to Larry, Darryl and the Other Brother Darryl... 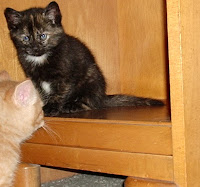 Charlie has turned out to be the more adventuresome of these three, though still lagging behind Blanche (formerly Guy Noir) who, the only female, has already circumnavigated the bedroom on her own. She also discovered this neat cave -- the lower shelf

of a night-stand in my parents' old '50s-style blonde-wood bedroom suit: I'm not sure she was all that thrilled that Charlie decided to join her but then she figured, "if you can't pick your relatives, at least you can join 'em."

Those three are already quite independent of their mother, Frieda, already eating adult 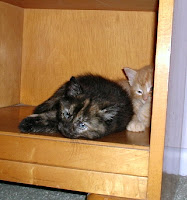 canned food, even the adult dry bits as well as the standard kitten chow. While it's quite a struggle in and out of the adult litter-box, they seem quite proud that they don't have to use the little baking dish set aside for their specific use which they are quickly outgrowing.

The other two -- Abel, somewhat, but Baker mostly -- seem reluctant to leave their mother's side and also walk by the dishes of cat food as if they have no idea yet what it is, even if the other three are busy woofing it down.

Since that first night I brought her inside, I haven't seen Frieda anywhere but lying behind the toilet, facing either direction (not that the scenery changes that much) or occasionally lying on her side in the Buffet Position. She still hisses at me if I get too close to her but she has sat there hissless watching me play with her kittens and even picking them up and holding them. This afternoon, while I was sitting outside the bathroom door watching the kittens play, I saw her start to step out from her corner heading toward the food dishes herself. But she saw me, quickly hissed and disappeared into her lair. 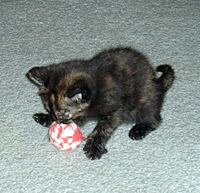 Meanwhile, Blanche has discovered how to play with a ball. The first time I rolled it toward her, she stared at it like "what the heck...?" Two days later, she's batting it around and tossing it in the air, chasing it around the room, just like a normal kitten. The others look at her like she's gone totally, freakingly nuts. Trying to photograph her in motion has proven pointless, but I would caption this one, in the manner of LOLCats, "I HAZZA BALL"...

But then, tired out after a half-hour of rough play (and protecting her ball from the curious Charlie), Blanche disappeared. As, for that matter, had her brother Guy. Getting out the flashlight, I began looking around and found them, curled up side by side at the far end under the bed (see below). Yeah... it's a dark night in a city that knows how to keep its secrets...